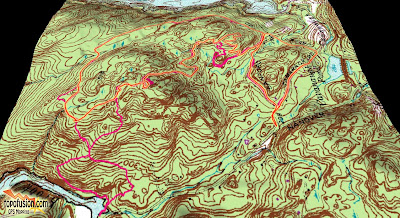 I think this was my last RAW of the season where hitting the forest when it is still light, at least light enough to the see the trail in front of you, but upon leaving you'd never be able to ride without some illuminating assistance.  Apparently the weather here in the Northeast is going to hell in a hand cart for the rest of the week, so this could very well be my last ride for Oktober, too. 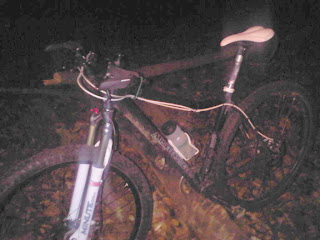 Had to try the diSSent after two rides on the Qball and all I can say is that I am not selling the diSSent.  Once on the trail I could feel major differences between riding the diSSent and the Qball.  Weight is definitely one of them and handling, too.  the diSSent definitely felt twitchier and really moved nicely on the trail.  Compared to the Qball, which in comparison was more like a tank.  I think the Qball is going back to being a Monster Crosser and I am going to build up the Longboard as a steel, weight weenie's dream. 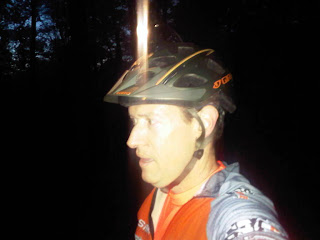 By the time I got to the Gussy I put the light on, at the lowest setting because it wasn't that dark and I know the trail so well that I doubt that anything would surprise me.  I took the reloc down to try the line on the rock feature at the top of the reloc and definitely feel that more benching is called for leading into it.  I also choked in the Wet Spot because I went too wide on the setup and missed the Tranny by an inch.  There are some reflector dots here and there from hunters but it might be good to get some more reflectors at the base of the trees just to be safe.
at 8:42 PM