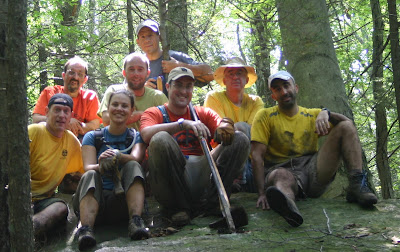 Met up with the Trumbull Trails Coalition on Sunday to do a trail reroute on the red trail as it descends towards the second stream crossing. It was a great turn out with 8 people in total. If you ride the Pequonnock River Valley frequently you will know that the this descent is a washed out down hill run that keeps getting worse and worse as the seasons pass.  After four hours of working in the humidity we went for a little ride but found that our energy was sapped from working so long and cut the ride short.

Later during the day, after taking a nap I cramped up so bad that I thought I would have to go to hospital.  Makes me wonder if trying to train in the this heat for Hodges Village is worth it.  The new drive chain was a lot more quieter.  I think adjusting the chain line helped.  The only thing makes any noise now is the EBB.  Going to have to work more on that.
at 5:18 AM