I made a minor change to the Stinson this weekend by going back to the Brooks B66 saddle that I got with it. In a sense, the spring loaded saddle in combination with the front squishy forks makes this bike a Full Suspension Fixed Gear (sort of). I decided to test this latest modification on a greenway trail early Sunday morning. With all the rain from the latest Hurricane to past by the East Coast, while out to sea, I figured the mountain biking trails could use a break.
I managed to mount my Thule Rack on my new car, a Toyota Highlander. I wanted to get the hybrid but it was too expensive and could only pull 2000 lbs. My boat weighs at least 3000. My Isuzu Rodeo, after 10 years, was on it's last leg with parts failing and the Hyaundi dealer telling me they didn't make the parts anymore so it was time for a change. When I got the new car I put the Saris rack on it but knew not having a swing away mechanism would be a pain and it was. The rack drops down after you release the pin but it can be bothersome if you are trying to do this everyday, especially in the pouring rain. 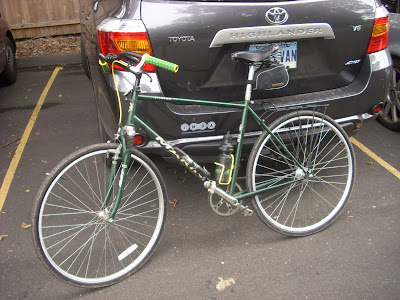 I have always wanted to do a round tripper on the Trumbull/Monroe Rail Trail and got that opportunity on Sunday. On a geared bike, mountain or road, it would have been over kill but on a fixed gear, it's perfect. The Stinson performed beautifully although I can't say that I am really all that jazzed about the Brooks Saddle. It looks cool but I can't find the right position for it where it's comfortable for me. Still it was smooth ride. The front fork smoothed out many of the rough patches and washouts along the trail. There is even a bit of single track, so I guess I can claim this to be another adventure in off road fixed gear riding.
From Tait Road to the Monroe/Trumbull line is was 9.5 miles so when I got back to the car I was just shy of 20 miles but I still had another half hour to kill before I had to leave for New Haven to buy and sell some bike parks, so I did another pedal up to Whitney Avenue and back for another 6 miles, to make the whole trip 25 miles. Very few cyclists on the trail early in the morning but later, on the way back, there were alot more riding mostly comfort or mountain bikes. Even saw some mountain bikers heading out to Indian Ledges from the lot at Whitney Avenue and while I wanted to chastise them because I new those trails would be really soft after the pounding we got on Saturday I held my tongue. Thinking about it now, I should have stopped and asked them when was the last time they did some trail maintenance.
at 7:17 AM