If you are a fan of Vintage Bikes, aka old crappy ten speeds, then check this bike out. It's a 1973 Lambert Grand Prix with one owner. Guy claims he bought it back then for $153 rode it for awhile, he made it sound like he didn't ride it that much and that's entirely possible just by looking at the tire tread. Sheldon Brown has quite an extensive history written up on the Lambert and Viscount Bikes, and a stern warning to any and all owners:
UNDER NO CIRCUMSTANCES SHOULD A LAMBERT OR VISCOUNT BE RIDDEN WITH THE ORIGINAL CAST ALUMINUM FORK!!!!!!!!! 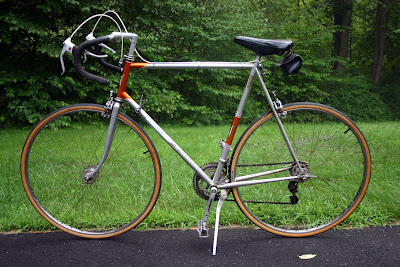 Here is the infamous Death Fork! 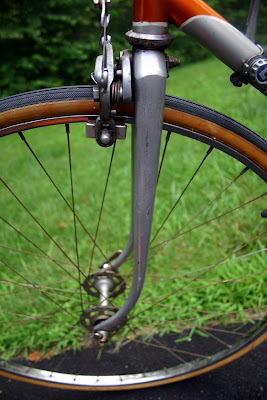 While this is not the Gold Plated version, unfortunately, it's still a fine example of English craftsmanship, hand made no less. Besides replacing the fork, the rims and spokes have quite a bit of rust on them which means they are going to have to go. I will probably cut the hubs out and sell them, along with everything else I take off, on eBay. The knobs on the shifters have a laminated L in red on a blue background, which is really cool. 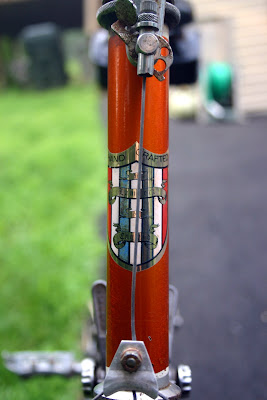 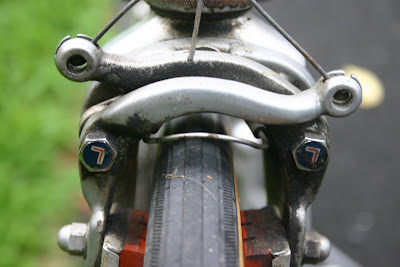 Both front and rear brakes come with tire clearners. Never seen this before but it's really neat. The one upfront doesn't seem to be functioning properly. The seat and wheel skewers have hand forged Lambert insignias. Saddle reminds me of the Schwin Varsity Saddle my parents had on their bikes when we rode around San Luis Obisbo back in the late 60's and early 70's. 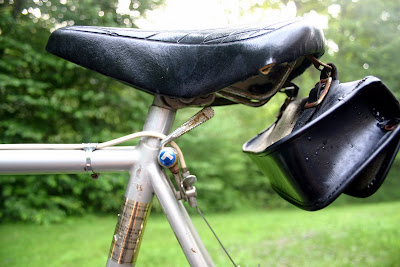 So, if you frequently read the Snack you know where I am going with this bike. I am going to strip it down and clean it up really nice. Replace the cables and probably get some dayglo orange housings from Dan's Comp to match the orange accents on the frame. I will be keeping both brakes, contrary to my usual MO on fixed gear conversions but I want to keep as much original parts on it as possible. The bars have to go, though. I think I am going to try shortened riser bars with orange Oury Grips. Maybe I should go all out and get some orange deep V's and call this bike the Orange Drop Martini! I think I also now have a good candidate for the Brooks Racer Saddle.
at 5:09 AM

you really have lost your mind now fruitcake.