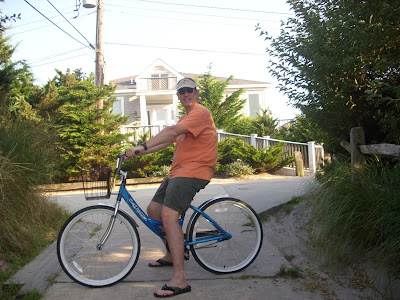 Spent the weekend with my family at my Sister-in-law's summer place on Fire Island. Getting off the boat, I was amazed at all the small, rectalinear streets (paths), that only support bikes! There were bikes everywhere! It was like Vauban, Germany, a community devoid of cars. The majority of the bikes ridden were beach cruisers, a fitting choice given the environment, followed by three wheelers due to their cargo carrying ability, and then a smattering of Old Crappy Ten Speeds, BMX bikes, and even a few mountain bikes. I was surprised being in such proximity to NYC and there were no fixed gears. 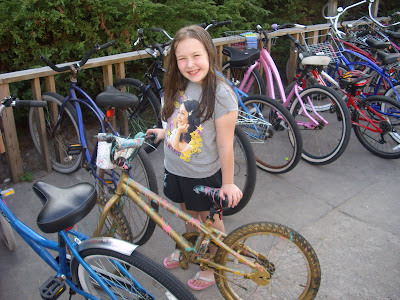 Bikes on Fire Island seem to serve the purpose of transportation. They get the habitants of the island to the beach, to the store, and to the docks. Most have baskets obviously for those trips to the store. And what is amazing is to see so many bikes in such horrible condition yet still functional. The salty air tends to corrode anything metalic and by the look at most of the chains from the bikes that reside on the island full time they haven't seen a drop of oil for years. 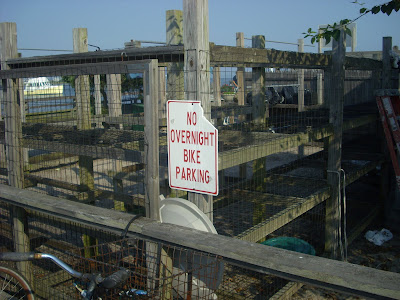 Never away any sort police activity during my stay and it seemed like this sign wasn't likely obeyed because when I rode down to store at six o'clock in the morning there were still bikes locked up here in front of the General Store. Below is the bike rack in front of the grocery store serving this community, Dunnewood. This was a busy place. 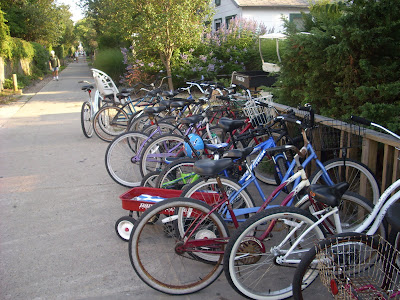 First time for me riding helmetless and for that matter in flip flops. Probably one barrier to having better bikes out here, especially if you just came for the weekend is that the passenger ferries don't allow bikes. They have come over on a separate boat, the cargo boat. Still, if I ever get a Surly Pugsley, I'd love to come back and ride the entire length of the island on sand!