Beauty and the Beast, Redux

I found this pair of bikes across from Grand Central last week and I thought they might be another candidate for my The Beauty and The Beast series. The Beauty, in this case a Bianchi Pista, brakeless, sporting a deep V front wheel and spoke cards. The Beast, I would guess an late 90's mountain bike with a one inch headset, sprung fork, and bar ends resembling that of a fork lift. If I were to guess, this could be Special-Ed Stump Jumper with the stickers removed. 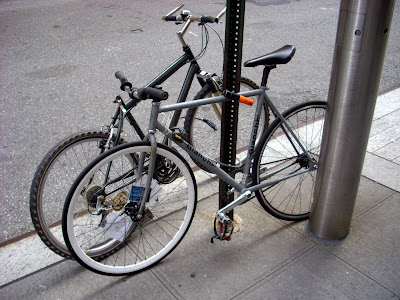 On closer inspection, the Pista looks worse than one of my better Old Crappy Ten Speed, Fixed Gear Conversions. The fork looks like it's rubbed up against many sign posts, other bikes, and brick walls to give it that Oh Man I need some paint look. Could even be on purpose as a theft deterent. I like the home made spoke cards that include a laminated Yuengling beer bottle label, and another laminated card with 40oz in sloppy ink. A true indication that the owner of this bike is probably a hipster.
Not sure what to make of the Stump Jumper owner. No evidence of racks or baskets means the rider is not likely to be a delivery person. In fact, during most of my trips to NYC as of late, it seems most of the messengers I see riding bikes are riding gears. 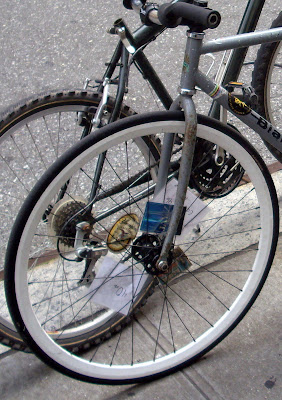 Across town, in the Theater Distric, I came across this fine specimine of the Old Crappy Ten Speed variety, a Raleigh Centurion. With QR wheels and only the frame locked to sign post. The owner probably figured that at 46th and 5th Ave was busy enough that it would be safe from getting his wheels stolen. 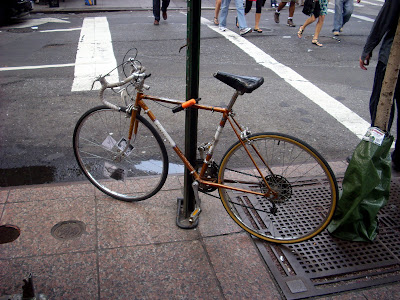 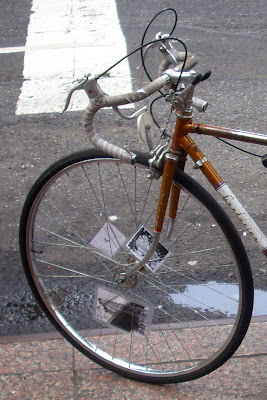 Email ThisBlogThis!Share to TwitterShare to FacebookShare to Pinterest
Labels: Beauty and the Beast, Commuting, NYC