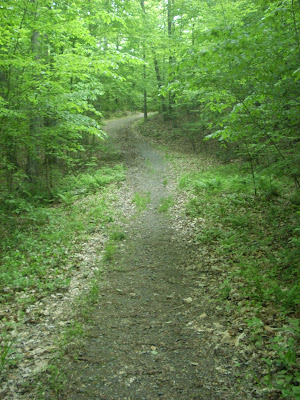 Rode the 'Horse today and decided to try riding from the Hanover Rd Trail Head and up the Brody Road. I don't like this way because you are on hardball road longer than if you were going the other route to Tamarack. Of course if you parked at Pond Brook or Echo Valley, you wouldn't have to ride on much, if at all. At least I am saving gas by not driving to a trail head.

Lots of erosion on the Fire Road. I think Tuesday it rained pretty hard. I was down in Trumbull and it got dark and showed a bit but nothing major. Heading up the fire road, I cleaned every stage including the Choke and Puke (steepest section) in second gear no less!

Got to say a big THANK YOU to who ever took it upon themselves to add some improvements on some of the up and overs. Hard to describe where this one is, but I personally refer to as the Trichter (which is German for funnel). It's about a 1/4 of the way in coming from the Fire Road. Before you get this point, the trail curves to the right and through a little technical section with a log hop.

Turn the corner and then start going down and you get this little jump here. Only problem is that you can't get enough speed to really launch off of it. I guess you have to treat it more like a wheelie drop. 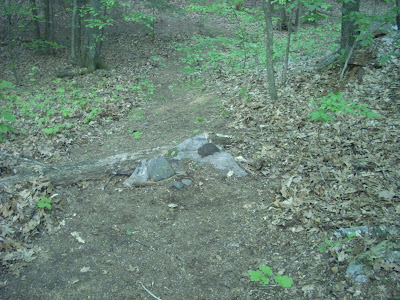 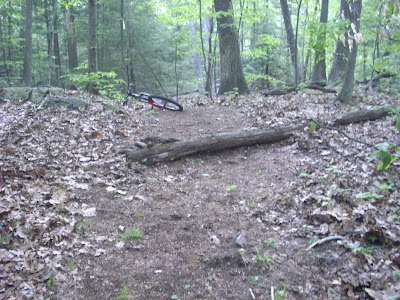 
It rides nicely, although the other side is still a little soggy and needs the same kind of attention as what I did on the other side.

Getting back on the Fire Road, I came across this gentleman walking towards me. At first I thought the Nasty Girls were running an op in the forest but one guy on the trail, out in the open, didn't seem really tactical (or smart). I stopped and chatted. Turns out it was last day of Turkey Season. He didn't get any but his buddy was supposed to be somewhere between the Forest Road and the water. Great, because I was planning on hitting the Mulikin Trail. 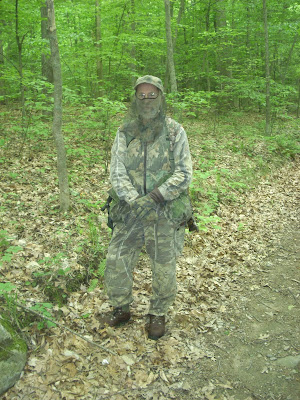 Never saw his buddy, must of had pretty good camo. I cleared my throat a few times to announce my presence in case he was in the area. I left the fire road on the way back and went down the Mulikin Trail. That needs some work, now, it's getting choked out but people are riding it so that's cool! There are some new trees down but nothing obstructing the trail

The up and over still rides nicely. The section between the rock wall and the old logging road needs to be cut back on both sides. Good thing I had long sleeves on because the thorny bushes were sticking out over the place and I still got a few scratches.

Seems people are riding the go around so I might have to go in there and armor that wet area, and definitely have to armor the other stream crossing. There was a lot of new blow downs on the old logging road grade down to Al's Trail. Today's ride starting and returning to my house was 6.2 miles and going the other way is 5.6 miles. I thought it would be longer. 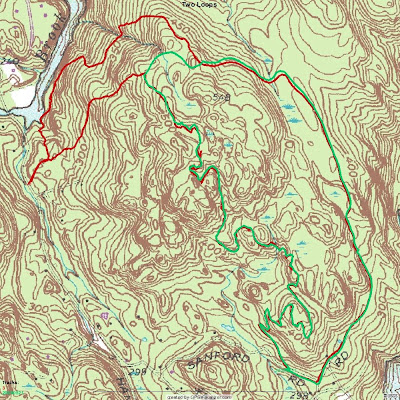 I think the profile came out backwards because the steady climb up on the right matches what it should be riding up the fire road and then dropping down a bit and then climbing back up to the start of the Trichter. When you look at it, this is a really good profile. 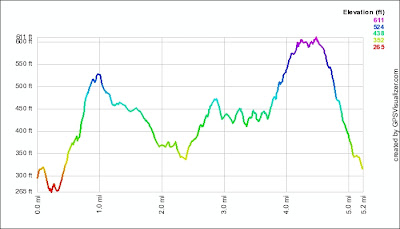