Took the boys out today for a ride on the Monroe Rail Trail. Decided to try something new and ride it fixed and it was pretty easy. Only had two times when I forgot you can't coast but nothing major and no injuries. Learned something new about riding gravel rail trails - if you don't want your kids to be covered in sand and dirt, you have to ride with the window down.

GPSVisualizer seemed to be down today so today's map is brought to you by USAPhotomaps. Looks like there are some updates to the code I need to download. One thing that I don't like about USAPhotomaps is that I can never get an image with one track using the options. Instead, I have to use a screen print utility to capture the image and save it to disk.

To get an idea of what this rail trail is like, check out this video I found on Google where a mother video taped riding from Cutler's Farm Road to Great Hollow Lake: Riding the Trail. Here is a good description of the trail and how to get there: Housatonic Valley Rail-Trail.

It was a great day to be out riding, temps in the mid 60s, slight breeze, and partly cloudy. Other people through so, too. There was even one family where the father was pulling one child on a trail-bike and the mother had another child in a trailer with a little puppy riding with him. Saw some folding bikes and even a recumbent, three wheeler. For the most part, everyone had helmets on, but there were a few Darwin Award Candidates. 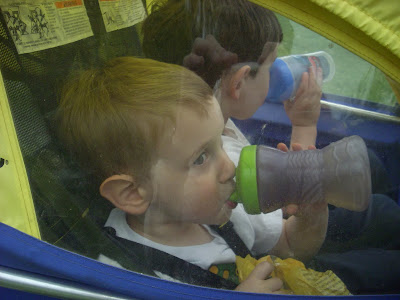 Elliot didn't want to be photographed so the true ham of the family stepped up to the plate and covered for him. Of course, every ride on this part of the rail trail requires a stop at the playground at Wolfe Park. Apparently, the lake is stocked with trout and there are quite a few fishermen and women there every day. 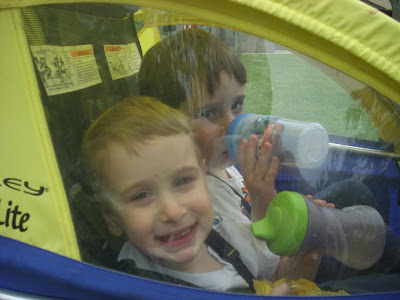 By the end of the ride, the boys were pretty hungry so we took a run over to Duchess for burgers and fries and then headed home.
at 2:51 PM