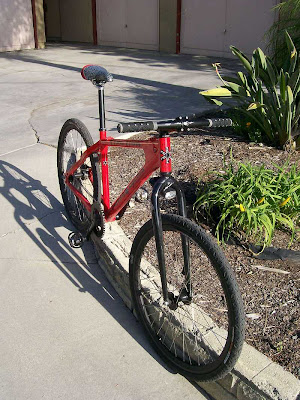 It's really cool to see another Fetish Fixation rigged fixie. Found this one on the FixedGearGallery the other day. Most fixies show up in urban areas and there doesn't seem to be much enthusiasm for off road riding fixed, but there are a few. While I have only ridden this way twice, on a fire road with half a foot of snow on the ground and the other just last weekend on a rail trail pulling my two sons in a Burley Trailer, it takes an entirely different mindset.

Before submitting my own fixie (Fixed Fetish Fixation) to FixedGearGallery where I was the 7,001 post, I trolled the entire site looking for examples of off road fixed gear bikes and found a few, and on the gallery they make up an extremely minuscule population, 0.003%! My favorite bike is one that someone used a URT (Unified Rear Triangle) platform and I am kicking myself for not doing the same with my Dumpgoose! Spacial needs won out over another frankenbike project. If I ever get another, that is what I am going to do.

Recent Off Road additions include: Mr. Happy Bike, a 1989 Diamondback, Roadrat (this might be an ATB frame and then again it might not because of the drops), here is another RoadRat with a front disc brake, and lastly and one of my favorite frames, a Surly 1x1. I had asked Dennis if he could add a little designation icon, like a fat tire, for those fixies that are ATB frames but so far, it hasn't materialized.

If you happen to know of any that I might have missed, or know of any other sites with fixed off road biking, let me know.
at 5:58 AM