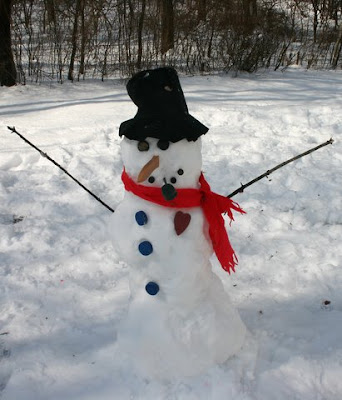 As you can see, rather than riding today, I played in the snow with the kids. We built a snowman, picture courteous of Katie, for a seven year old, she can take a great picture. She also took the picture of me and the boys below. 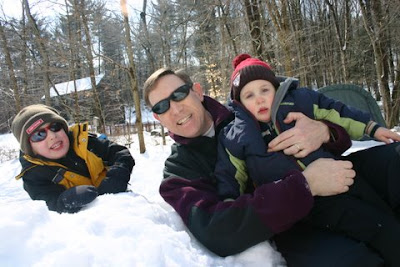 I spent most of the morning building a snow fort for the kids. Got the idea from a post on iBike where they used an igloo cooler to make their blocks. Mine was kind of buried, so I used the recycling bin and it worked out pretty well. Kind of hard to see but it's taller than Brodie. 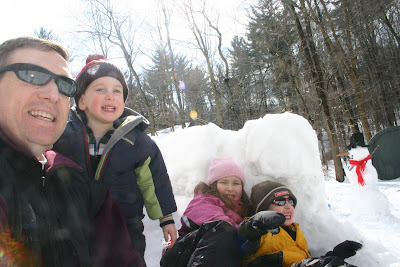 Later in the day, I hooked up my new Thule Big Mouth tray atop the Isuzu and tried the 'Horse out on it. It was pretty easy. I got the Thule from a guy upstate on a bike forum for $50 clams. I am not getting rid of my Saris rack, I will still use that when I need to carry more than one bike, but by having this on top of my vehicle, I can throw a bike up there whenever I need to, without having to go through the rigor of hooking up the Saris. 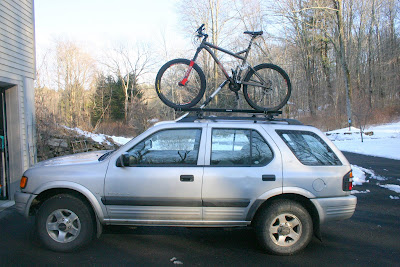 I also road tested the mount by driving up to New Milford and taking the 'Horse to Straightline Bikes and Boards. Apparently, they are going to start carrying Iron Horse so I thought I would get a tune up for the spring and get my rear derailuer fixed, since EMS never fixed it.

Below is my FU Bar on my Fixation. The positioning is perfect and really comfortable but you know me, I am into trying different things and I have some more changes coming soon for this bike. Probably moves these over to the Dumpgoose.

Nothing beats building a SnowFort with the family. Thanks for the mention. I may try to create a Dome like building so it has a Roof.