If I only had a Surly Pugsley!

Rode in Upper Paugussett State Forest today and the snow in most places was anywhere from three to six inches deep and it made riding tough, even on the Qball! Some Large Marge wheels and Endo Morph Tires would have been really helpful today. I think I read on TwentynineInches.com about how great a 29er is in the snow but I wonder what kind of snow they were talking about. The blog post is appropriately titled, Why Ride a 29er.

Loose Terrain Traversing/Traction There is a reason why early 29″er pioneers were winning mud bog contests and crossing sandy desert terrain better than their 26″er brethren were. The wheels seem to really excell at crossing loose sand, mud, and even snow. This is a direct result of many of the above mentioned benefits working in concert with each other, but is remarkable, so I mentioned it as a stand alone trait.

I had never considered this as a reason to drink the Koolaid, what sold me was (and you will find explanations on these reasons in that same post):

I never considered these factors:
I think mainly because I also wanted to try single speeding and this seemed to be the logical choice. But getting back to the snow, the Qball does ride pretty well in the snow, but I think it has to be the lighter, fluffier kind. Soft, deep, wet snow that sucks all your momentum and energy is a different story. That is why I think the Surly Pugsley would better in this type of snow. Here is a really cool shot of a newer Pugsley from iBike, granted is not the Purple People Eater version. In 2007 Surly changed the color on the Pugsley to grey. 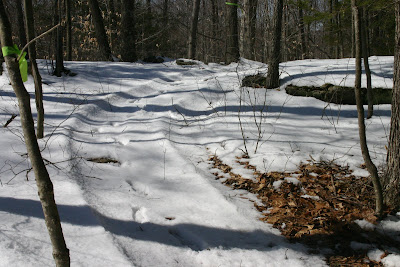 I followed the ATV tracks on the Upper Gussy and the rider got over the first rock ridge but turned around in the little gully afterwards. So, in order to thwart future incursions I am going to have to make it as difficult as possible to anyone on an ATV to get it. Besides putting in logs to make up and overs that bikes and horses can get over easily, I am thinking about trying some corralling to disrupt any thought of travel by lashing 2 or 3 inch saplings to thicker trees to act like a fence.

Additionally, there is one section that I think someone is tearing down my markers. Twice I have been through here and remarked this section only to find the markers not there again. I am not really worried though because when the trail building starts in earnest, it won't matter. I did, however, do some twig clearing along some of the initial sections off of the Polly Brody and the other side about a 100 yards from the ROW.

I wore my new Gore-tex Shimano mountain boots and they rocked! I wore a single wool liner ski boot sock and my feet never got cold nor wet. They are extremely comfortable. The only thing I am not sure of is where I should have the cleat positioned. Right now my cleats are in the forward two holes but looking at my other shoes, the cleats are in the back two holes. I think what this does is move the ball of your foot closer to the center of the pedal. I am going to try it in this position for a while to see if it's any better. Looking at my Cannodale riding shoes, I might have to replace those this spring because they are looking pretty beat. 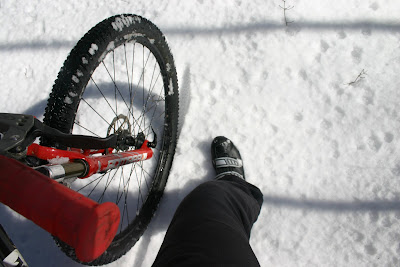 Climbing in this snow stinks, but when you get moving downhill, the 29er rolls nicely. In fact, I threw caution to the wind and hit the Tunnel of Love and cleaned it handsomely, even with 4 inches of snow on it. 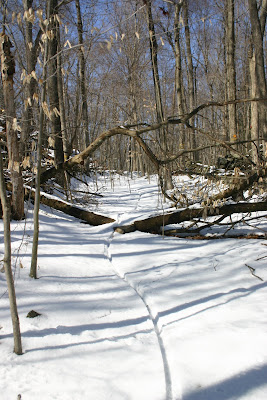 Here is a map of the ride, overlayed on a previous ride from last month where I rode with Tren and Rick. The green track is today's ride. I found a neat a little technical off shoot that I will talk more about on my Upper Gussy Blog later and as you can see I bypassed a section because I was running out of time. I also did the double stream crossing but walked both crossings. I am still on the fence about those. I need to get someone on a horse to go through there and see what works for them. 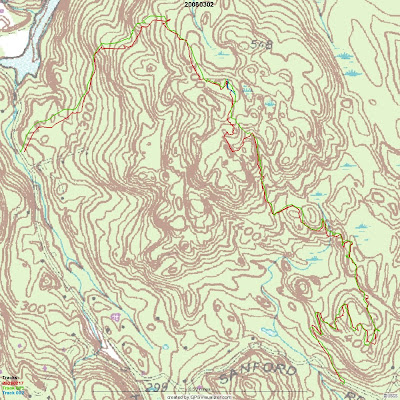