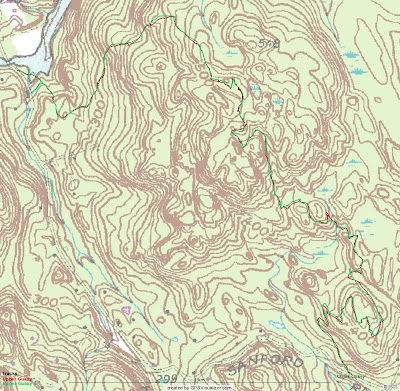 I was about half way down the Upper Gussy today when I came across a hunter! Yikes! I didn't think there was any hunting right now but did you know it was Coyote Season right now? It is and Upper Paugussett is one of the only places in Fairfield County which is actively hunted during every part of the season. Ironically, I have ran into this guy before. Last spring I came across him setting up Turkey decoys along the connector trail and I thought he was too close to houses but he wasn't. He did say, that it was also squirrel season right now but according to the DEP website for the small game season the only animal that is fair game right now are dirt pigs (aka Woodchucks).

Brought a hand saw with me on this ride and took care of many eye level branches along the trail. Also opened up the trail through the ROW section just below where I met the hunter. I think I just have to make one more trip through with some loppers and it will be pretty clear! The trail is really starting to come together, at least for bikes. I am sure once the horse people see some of the northern sections they are going to want some go arounds and some alternatives, which is understandable. I don't think horses will like some of the rock gardens I have routed the trail through. 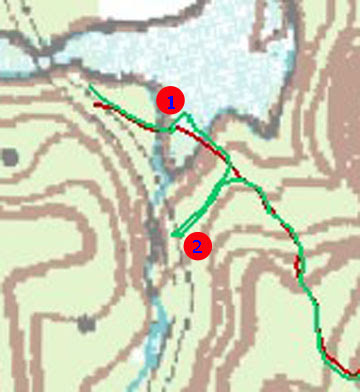 I walked the section of the connector trail in which we will have to re-route to get around the bank issue. At point #1 above, even though the topo shows water it's actually land. This section of the trail will require a lot of work and I will plan for an April Trail Building Session to address this section.

I noticed a few weeks ago this new sign just off Hanover Road, which is located at point #2 on the detail map above. I wonder if this was installed with the permission of DEP or not? The trail leading up this is a really nice example of benching. I will try to get a picture of it on Sunday. Since this all that the sign says, I thought it would fitting to take a picture of the Qball leaning against the sign. 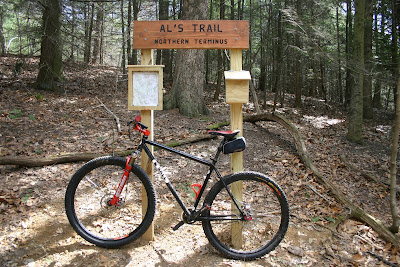 I stopped to take some pictures of the wet area off the ROW which I will be putting up a post on the Upper Gussy Blog. Took a nice shot of the Qball in the woods. This bike is a such a pleasure to ride. 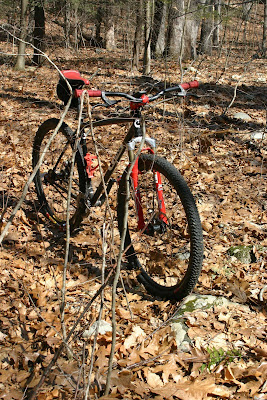 From here, I got on the ROW and hammered to the Tunnel of Love, which I cleaned handsomely but after turning around and heading back into the forest, I was going kind of slow and hit something on the turn in which sent me down like a sack of potatoes. The Achilles heal of the 29er, poor maneuverability at low speeds.
at 6:20 PM