Since this day only comes around every four years I thought I would get a post about an unusual frame design because it's an usual calendar day.

I have been perusing the Fixed Gear Gallery lately, looking at different kinds of fixed gear bikes when I recognized a Catamount, which is a URT (unified rear triangle). According to wikipedia:

The "Unified Rear Triangle" or "URT" for short, keeps the bottom bracket and rear axle directly connected at all times. The pivot is placed between the rear triangle and the front triangle so that the rear axle and bottom bracket move as one piece, and the saddle and handlebars move as another piece. This simple design uses only one pivot, which keeps down the number of moving parts. It can be easily modified into a single-speed, and has the benefit of zero chain growth and consistent front shifting. On the other hand, when the URT rider shifts any weight from the seat to the pedals, he is essentially standing on the swingarm, resulting in a massive increase in sprung weight, and as a result the suspension tends to stop working. Because of this effect, along with persistent suspension bob and a constantly changing saddle-to-pedal distance, the URT design has fallen out of favor in recent
years.

When I had the Pig, aka the Giant AC, and all the problems I had with it, I was thinking about how you might get better pedaling efficiency and eliminate the bob that is created by four bar suspension when on my own I thought of something like URT. Of course, as I found out, it had already been tried. However, if you think about today's Comfort Bikes, the URT is really an over designed comfort bike.

It seems fixie off road riders are a rarity and what I have gathered so far is that people using a mountain bike for fixie riding are simply doing it for the fact that they believe the wider, knobbier tires will give them better traction on roads with snow on them. I can believe that. Below is the Catamount from the Fixed Gear Gallery.

Which got me thinking about the Dumpgoose. Remember this monstrosity? As a
69er, it was not well received in the Koolaid Drinking Community but what about the fixed gear community? 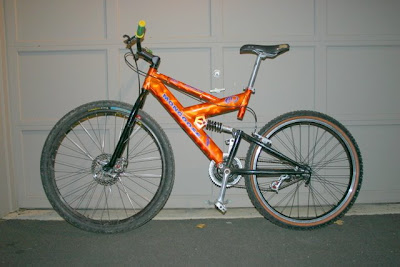 Who knows, maybe I can get a mention on BikeSnobNYC. Well, I have been thinking, why not make this into a fixie? I have everything I need, except the cog. All I would need is a 16t or 18t TomiCog and run it with my Atomblast Disc wheelset - a bit overkill I admit but at least it will consolidate the wheels and get them off the garage floor.

Truth be told, the Dumpgoose rode pretty well. You sat very upright and it was perfect for pulling the boys in Burley. I will probably throw on a 16t and play with the 44t vs the 33t chain rig and see how she pedals as a single speed. If it's not worth it, then she might go back to being a ski bike. Of course, I still have to figure out how I am going to do that.

The biggest problem with the ski bike concept, I think is deciding whether or not to remove the cranks. If you don't, then you have mount the skis so that the pedals have enough clearance, which means, for one thing, that the front fork needs to be boosted higher. Check out this YouTube vid - actually this is something I want to avoid because you notice that the rider is a bit too far forward and thus you could be prone to an endo. Also, the sound track might be a not suitable for the office.

The ski bike in this vid is what I want to achieve.

And then again, to achieve my goal, in this vid, at least on a ski slope, having rear wheel doesn't appear to be a hindrance.

So it looks like it might just boil down to ensuring that mounting the fork to the ski achieves the correct hight for the bike geometry. Interesting site linked to this vid and I have seen this site before: www.bikesonsnow.com. Looks like the owner of this site has been obscessed with the skibike concept for the past 10 years or even more because there is a quite a history of development of and progression.

and this is what it has become today:

Here is the solution that this site offers and it's what I would like to achieve but not at such a great expense - it just looks expensive. If you poke around further on this site, you will see that they are also offering a product called the FloWing, which to me looks just like a MaryBar or the FU

Bar, which I own and have ridden with on the Qball and the Fixation. By the way, there are two types of FU Bars, so further on I will have a comparison of all four bars.

A few things strike me as odd off the bat. The FloWing claims to be crafted in Vermont, so what does that mean? I sent an inquiry to the manufacturer to find out what that means and how much it costs. My guess, and I could be totally wrong, is that he is importing the bar and puts the finishing touches on it.

So, let's compare the four:

* Can't tell from their site whether or not their currency converter is working properly. See for
yourself: Misfit Psycles
**at Pricepoint.com you can get this same handlebar for $54.98 and after pay for the shipping you are probably back to the converted price from Pounds Sterling($69.52).

Swept back bars are definitely worth trying and believe it or not they really make a difference in climbing since your grips are more towards the back of the bike, when you come out of the saddle, especially on a single speed, you are forced to stay in the middle of the frame, thus centering your weight in the middle of the bike. This prevents wheelies and being too far forward which will give you less traction.

Here are pictures of the four bars:

On One Mary Bar

One thing to note about forward sweep. The folks at On One make a good point about the importance of forward sweep:

The bar sweeps forward 2in or so from the bar centre to allow you to run the same length stem you've got at the moment, and not need a stem swap. This lessens the torsional force going through the stem clamp, which we found was a problem on our non-swept-back samples (yeah fine, you can just fit a longer stem, but then the force that you exert on the bar can easily make the bar spin when doing drops and stuff, though this can be fixed OK with a good stem, careful installation and a bit of loctite, we didn't think it was a perfect scenario).

All three bars seem to have some degree of forward sweep. Definitely something to try, especially if you are looking for something that gives you a natural feeling in the way you hold the bars.
at 8:49 PM

I never rode on a URT design but that makes sense. As for the Dumpgoose you appear to have a chain tension device and you may eliminate the need with a SPICER HALF link $2-$3 . I bought a few but I think I have given away all. I will check. You probably are aware FIXED gear bikes cannot use a chain tensioner. My older brother toyed with a Ski Bike back in the 1970's , I have no pics ;^( , but after many attempts we never were able to get it right.

Yeah, I am going to get some half links to negate the need of a tensioner.