I got this email in my inbox the other day and I can't believe that someone actually would have the audacity to write such a note. Do you think people really fall for these scams in this day and age? 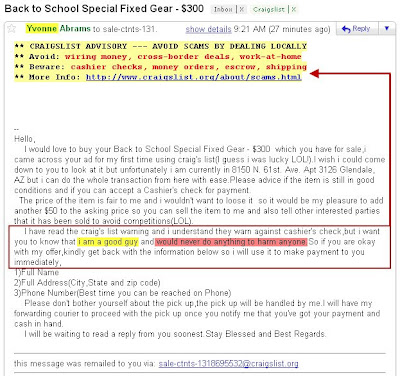 Do you really think Yvonne is a good guy? Of course, he would never do anything to harm anyone, except steal your money.
I didn't bother responding. I did, however, respond to Louie's note below. I figure he was just busting my balls but I countered with an offer that I felt what the bike was really worth.

According to the New York Times City Room Blog, Spokes Edition, another classification of Old Crappy Ten Speeds is the Beater Bike. According to the post, refurbished Ten speeds run between $200 and $300. I contacted Patrick Tomeny, manager of the East Village shop of the nonprofit Recycle-a-Bicycle, who I rode with last summer at Trumbull during the first annual (and last) East Coast Fetish Cycles Fest, about what he thought what the base price for Fixed Gear Conversions and his response was $350 which is largely due to replacing the existing wheelset with a Track Wheelset. That is the key to figuring what to price the bike at, what do you replace when refurbishing the bike and the quality of the components.
The Market for fixed gear conversions right now seems to be running between $300 and $400. I guess if averaged these prices you could say the "Fixie-dex" to borrow (and chop) BikeSnobNYC's Pistadex, here in CT is around $345 according to yesterday's Craiglist offerings. With the exception of the last highlighted offering, all these bikes are converts. Some are pretty good and others are, meh. Those fitting into the latter category are over priced, along with my Fuji, I admit but it doesn't hurt to test the market. 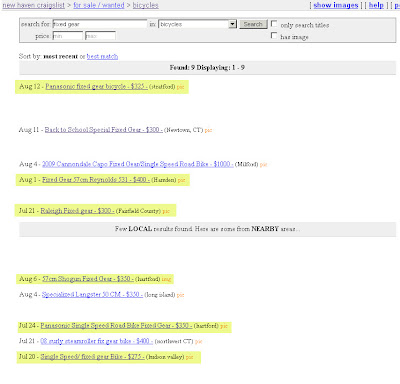 So, based on this analysis, you be the judge on whether the following bikes are worth their asking prices. 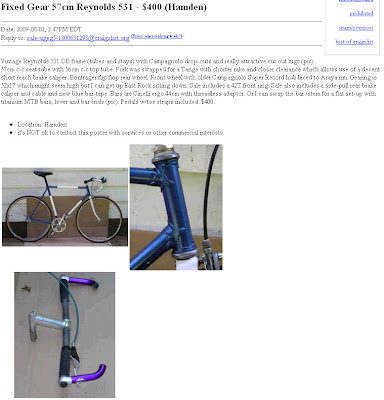 While this bike looks good I smell a rattle can paint job. Some decent parts and it sounds like the second set of bars will be thrown in but I think this bike is over priced by $100. 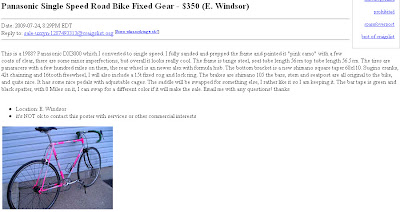 This bike, looks like another rattle can paint job, but if it really has a few coats of Polly, then that's a plus. My guess on the component mix is that that Cranks, brakes, and wheel are new and everything else is original. Still, I would say this bike should be priced at $400. 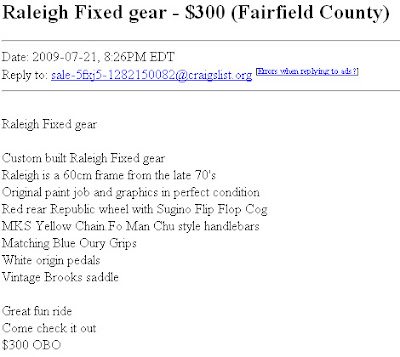 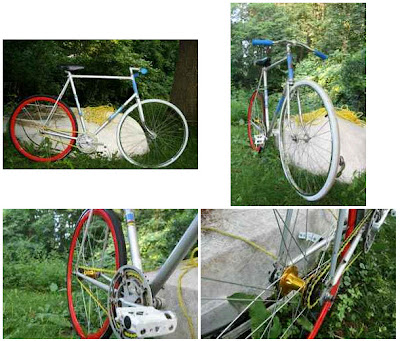 There are a few detractors on this Raleigh, besides the color, as well as some misleading components. The Brooks Saddle is really their racer saddle and not like the hard leather saddles everyone knows and loves. You can remove the outer chain ring on those old Raleighs so that it looks cleaner. On the plus side, nice rear wheel, but a down side at least for me is no brake. Given the mix of pluses and minuses, $300 is probably the right price. 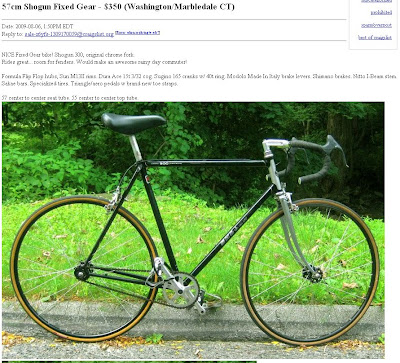 This Shogun looks fantastic and I think you could get more for it, especially if the owner threw on some bullhorns and TT levers. 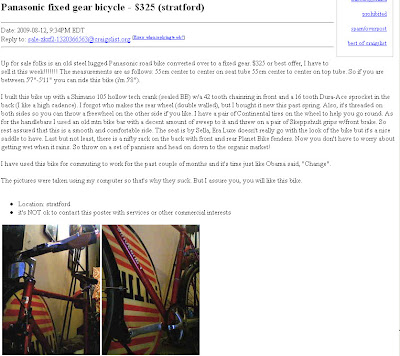 Good component mix on this bike and with the exception of the lousy pictures, seems rightly priced.

Of course, the true measure of the Fixie-dex is what the bikes actually sell for and in order to get that I would need to do a empirical analysis on the actual sales prices. Using my own score card based on my past bike sales my Fixie-dex comes in at $260. Thus, my Back to School Special is a bit overpriced and that can also be seen by the lack of responses.

Email ThisBlogThis!Share to TwitterShare to FacebookShare to Pinterest
Labels: Craigslist