My second NEMBAFest and I stayed once again at the workers campsite.  It was touch and go on whether we would be camping here again or have to camp at the main site.  If the Cutter Inn ever get's renovated then this could be it.  Besides being separated from the main area and having indoor bathrooms and showers, the best thing about camping here is being on a flat surface!  There was just one drawback, the pool wasn't working this year. 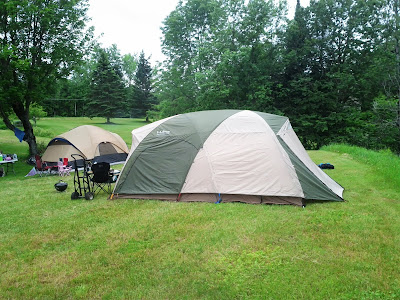 I learned a lot from last year which made camping out this year much more pleasant, like don't bring a ton of food and bring a great tent!  The family tent got upgraded this year to an LL Bean King Pine Dome 6.  The key thing about this tent compared to most of the other tents you see out on the market that sleep 6 or more people is the full fly!  You have to have a full fly if you are going to camp out with any potential for rain.  The last tent we had did not and when ever it rained we were miserable.  It did rain at NEMBAFest but this tent performed superbly. 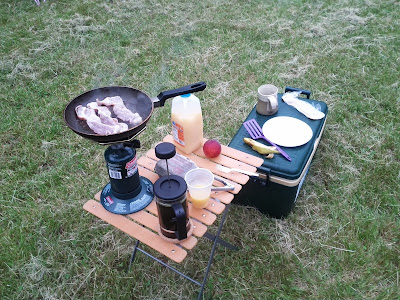 Bacon, eggs, and coffee was my standard breakfast fare.  I made hot dogs the first night on the charcoal grill but it took so long to heat up when I finally got the coals going (that took awhile) I was lamenting not getting a gas grill.  Definitely going on the list for next time. 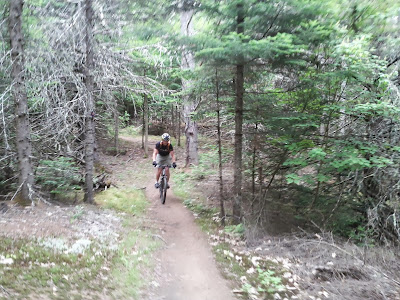 When I got to NEMBAFest on Friday, after pitching the tent, which only took me 25 minutes I had to run back to Burke Mountain Lodge to work the NEMBAFest Tent for my first shift so I never got to ride again Friday.  I made up for that on Saturday. I met up with Peter Finch, a CT NEMBA board member who works security at the venue and we hit the trails really early and it was awesome because there was practically no one else on the trails.  It's like we had the whole place to ourselves.

We rode the south side of Darling hill, mostly along the river with the intent of hooking around to the Chapel and ride the trails around Sidewinder.  Those trails were in phenomenal shape despite all the wet weather Vermont had been having. 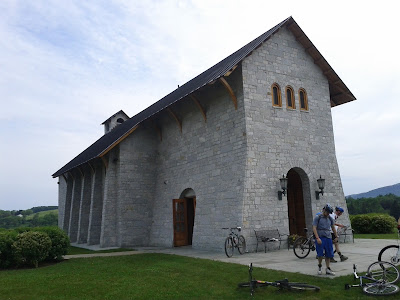 We rode up to the Chapel just as the caretaker showed up to open the place up.  It's a magnificent piece of architecture.  We were able to go inside and cool off a bit and refill our water bottles.  From there we rode down Old Webs to Sidewinder, back up on West Bench and then back towards the center of Darling Hill on Fox Run.  Peter had to head back so I went on to ride Toady's Tour, back up River Walk (awesome climb) and back down Troll Stroll. 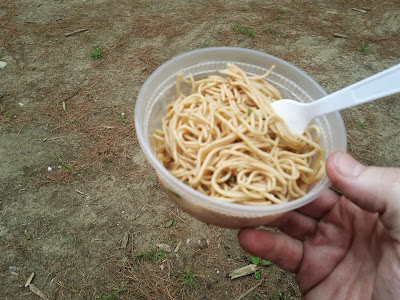 Rather than ride back up River Walk again, I headed the other direction and rode Eager Beaver, and more along the river but then split off from the main trail and rode Charlotte's Outback to the big rest and eating area just west of the Chapel.  Had some noodle salad and banana for lunch. 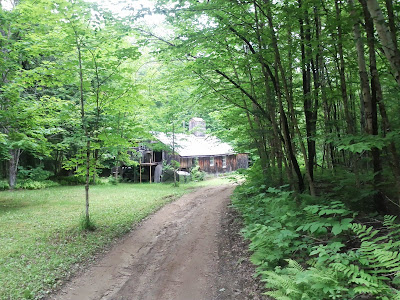 Riding back on Vast and then Bill Magill, I wanted to finish the ride with a good rip down Kitchel and great rip indeed it was!  That is of course it kind of went to crap when I wiped out on Hasp and got a nice gash on my leg. 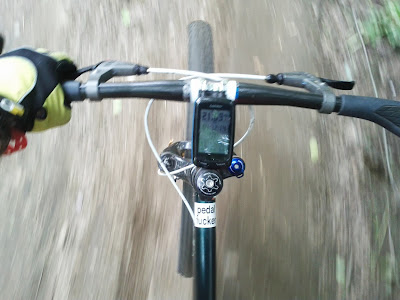 When I got to East Burke the shuttle had just left and since I would have to ride back to where I was staying anyway I just rode up Shellburne Falls Road.  I was surprised not to find any Strava Segements on this climb but it was worth doing it.  I finished the ride at 25 miles!  After working my shift, having dinner at the Tamarack Grill, I went to the main camping area where I met up with some friends at a wedding reception.  A couple from West Hartford got married at NEMBAFest!