After dropping Elliot's younger brother off with their Grandmother Elliot and went over to Fairfield Hills to do a little riding.  Too bad the Town of Newtown can't get their act together about creating a bike trail completely around the circumference of the campus, so we road on the Recreation Path, some sidewalk and some roads to do a few 1.3 mile laps. 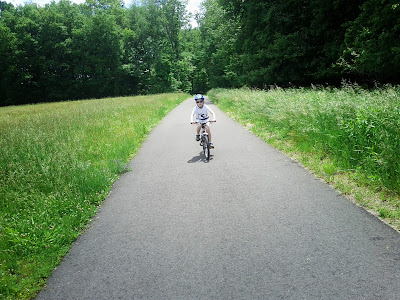 It was great training for him to overcome his fears of climbing and descending.  It gave him the chance to get more comfortable with his gears by getting used to the feeling rather than always having to look at the number of the gear, because that is challenging for him.  After the first lap, he got more excited about the next to try and go faster, and also on each consecutive lap. 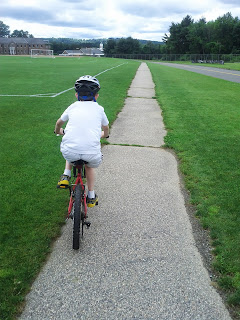 Elliot has a condition called Optic Nerve Hypoplasia (ONH), he has underdeveloped optic nerves, that result in his eyes shaking from side to side.  The last time we rode together I found that he had a tendency to drift to his left frequently because that is the side that I think he favors to hold his eyes.  Since he can't hold his eyes straight forward like most other people his null point is to the sides where he has a little control.  What I tired today with him is to ride with my blinky on constant shine mode and have him follow it.  He did pretty good but I think he needs more practise. 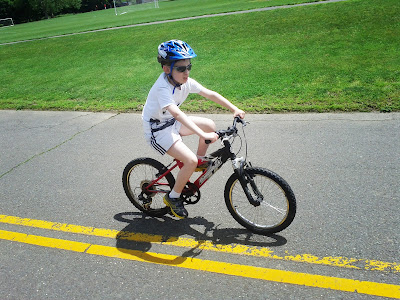