I signed up for a team relay triathlon at work where I would naturally be on the bike.  It's called the KIC IT Triathlon supporting the Stamford, CT based charity called Kids In Crisis.  Apparently, my company is a big sponsor of this charity and reached out to our other locations to field teams.   That is why I purposefully, over the past couple of weeks have been building up the Qball to be once again, a road loving monster crosser.
Now it was time to try and ride the 24.8 miles that will be required of me this coming Sunday. I mapped out a route on RideWithGPS that encompasses a lot of familiar territory from my work commute (which I have start again) and some challenging sections that I ride with Katie on the Tandem, so basically all familiar territory. 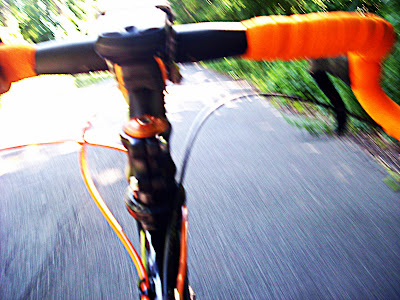 The Qball rides really nice and it's really smooth.  The new tires I have on the bike really make a difference.  They are white walled Kenda Cyclocross tires  (700x38c) and kept at 70 psi are pretty fast and really strong, more so than the Kenda Kross Commuting tires (700x42c).  Shifting on the bike was really good.  I used the big ring to descend and ride in the flats and the little ring to climb, and what I found is on my hills with more gradual grades I could ride up them in much higher gears.  I think, though, I have to replace the bottom bracket.  It was making a grinding noise whenever I was pedaling.  In fact, now that I think about it they have made this noise for quite sometime so it's probably time I replace it. 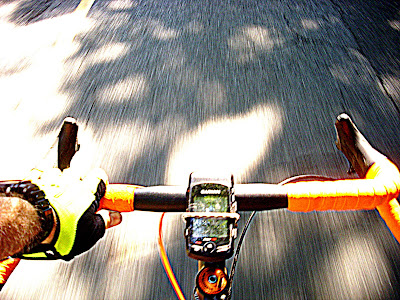 I love these Salsa Woodchipper bars.  They give me all sorts of hand positions to choose from to accentuate my riding style as the terrain demands.  Clearly, much different riding than what I am used to in the woods.  I can see why people do it because it's challenging in terms of maintaining a good average speed, climbing hills and pushing yourself, oh and the roads are pretty smooth around here, too.  I now see why a lot of mountain bike racers use road riding to train because it boosts your endurance over a long period of time and when you take it to the trail, where races are much shorter you can compress that for the event. 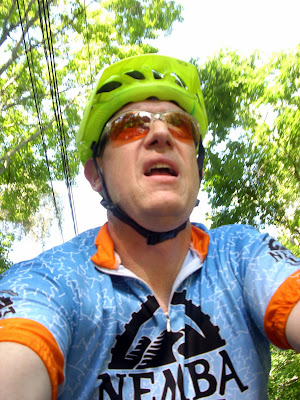 Thursday's route was good, it had about a mile of dirt roads, perfect for these tires, 1400 feet of climbing, which was a good mix of gradual ascents and then some real steeps.  Originally I was going to try a route that I mapped out on RideWithGPS that stayed within the Housitonic Valley but I knew that was going take much longer, especially since I wasn't going to be familiar with the routes and it had double the amount of climbing.

When I got to Route 302 in Bethel was when I really started pushing myself because I was near the halfway point and so far the ride had been sort of choppy without any good long stretches to open up on.  That must be the allure of road riding, big open stretches of pave and pushing yourself to go faster and faster.  The descent down Mine Hill was a little scary because there was a rough patch of pavement that I hit and I knew if I were running 23c I would have flatted for sure but I think the tires and the bike geometry of the Qball kept me upright.  On Route 34, towards Sandy Hook Center, I passed a mother and her son riding mountain bikes on the road.  The son didn't have a helmet on and I as I passed him I recommended that he get one.


Past the center of town, while still flat on Glenn Road I got blown away by some dude on a Carbon Fiber Crevelo in Bethel Cycles kit.  I yelled at him after he passed that "Badger is about 10 miles ahead!"  Stephen Badger is someone I work with and a very accomplished CAT1 Road Racer.  The last stretch was the Walnut Tree Hill and Alberts Hill section back to Hanover Road.  Walnut Tree has a steady 3% climb up to Alberts Hill.  Alberts Hill has two 6% climbs that wind up being chuggers as I am nearing the end of the ride.  I passed one Clydesdale on the first hill by the vineyard who was walking and when I told him he can't walk he said he was on a new bike an unfamiliar with the bike.  He was on an old school steel Trek with shifters on the downtube.  I felt really good after the ride and I think I am going to have to do this again sometime!