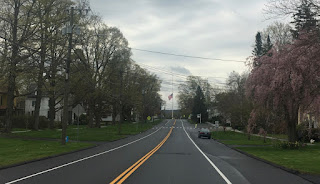 It was Gavin's idea that we ride to Ovens of France Time Trial style by leaving Cover 2 in 1 minute intervals. Scott went first followed by myself, then Gavin and Michael brought up the rear.

We should have started after the traffic light in Sandy Hook because I had to wait for the light to change.  Towards the end of River Road I saw Scott heading up Purchase Brook Road. Nearing Brown Brook Road, Scott was within eyesight and I could see Gavin, too. 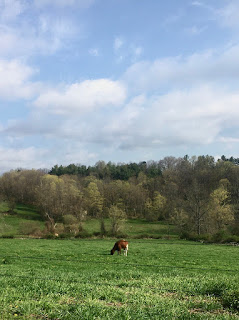 I didn't stop to take a cow picture like Gavin did. I made it a drive by photo opportunity. Scott had pulled ahead of me on 172 but I got closer to him on Transylvania Road, maybe within a 100 yards. Turning onto 317, though, I lost sight of him again. It was like he vanished.

I was the first one to arrive at Ovens of France. Two minutes later, Scott shows up and tells me that at 317 he got confused with the route and started going to the Haute Dog way when he realized his mistake and turned around. 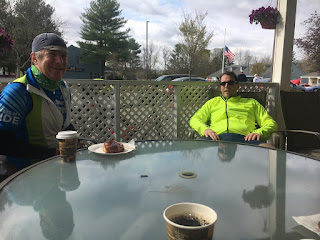 There was a car show taking place at Ovens of France today and surprisingly none of the car enthusiasts were wearing masks. OOF had a two person policy for entering the store and some guy either decided to ignore it or didn't care. It was hard to be socially distant because the customer section at Ovens of France is really tight. Outside, were able to be socially distant while sitting around the big table.

We left Ovens in the same intervals again and upon returning to Cover 2 I got there first again! Turns out Scott took the bike path on Rochambeau Bridge.  Scott should get the Douglas Corrigan award. He's the guy who in 1938 was supposed to fly from New York to California but due to navigational error ended up in Ireland.