Dirty discoveries in the Berkshire Foothills 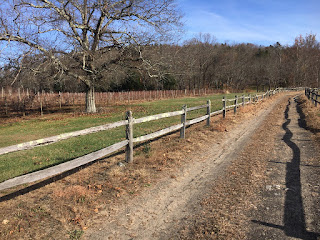 I set off Saturday morning on a scriptless, local gravel exploration to try some new stuff and explore dirt roads on the Roxbury/Woodbury border that I seldom ride. I actually had a route planned but it was much longer than what I time for as I left later than I had originally intended. I waited for it to warm up a little more. With the sun higher in the sky and the temperature at 32 degrees, I rolled out. 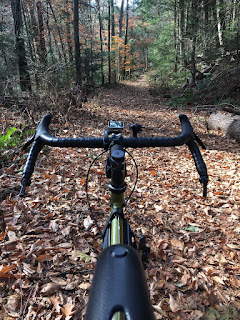 I took my usual route from the house to Roxbury in which First Dirt is less than a half mile Sanford Road. Headed over to Black Bridge by cutting through the winery and then climbing up Walnut Tree to make a short, dirty descent on Lester Road. Unfortunately, Black Bridge is a fun descent down to the Pootatuck River. 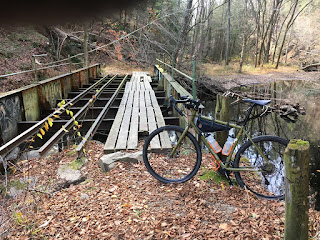 Crossing over the Pootatuck was sketchy. The pallet wood that's been zip tied to the bridge girders is getting old and creaky. There are a few broken sections and cracks in some of the other boards that looks like others have already found. It could use another layer of pallets. 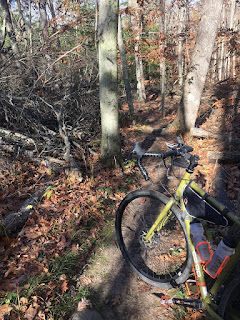 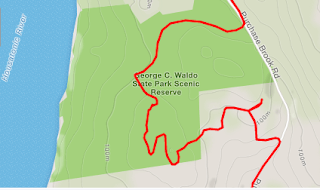 The section I was on ended at one of the fields so I rode the edge of the field so I could get to the next section of gravel and I thus I found a back way into Waldo! 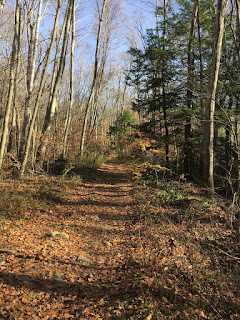 There is another gravel road that goes through Mitchel Farm, which is the access road to the RC airplane area, that I bet is the access to this section of gravel and the back way into Waldo. I need to give that another try. I took the Where's Waldo Trail (Red Blazes) to the Hunter's Trail (no blazes) and then followed that down to the central access road and then up to the parking lot. 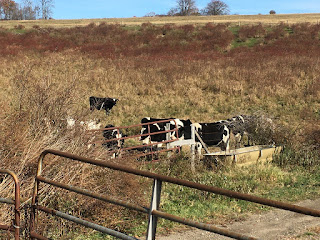 After riding Peach Orchard I checked in at Spruce Brook Farm to see if the ladies were present but they were way off in a paddock too far from the road. Heading down Cassidy, however, I did find some other cows to visit with. 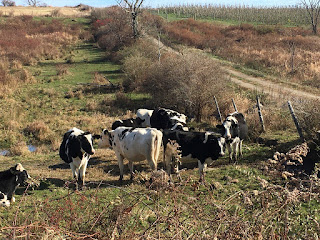 The real fun begins when Cassidy turns into dirt. It's a nice, not really climby road with no houses on it. I keep expecting to see a bear through here because its so desolate but no luck today. Towards the end it descends to Flag Swamp road, which is another dirt road that that descends into Roxbury.  I rode up South Main for a few hundred yards and then hooked back on High Bridge. 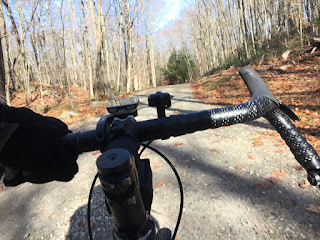 It's been awhile since I have last ridden High Bridge because once where there were two houses now only one stands. It was redone nicely and the other appears to have been torn down. On River Road I noticed the trail from Rocky Mountain Road had been opened up a bit. I thought about trying to climb it but then it would have taken me away from one of my objectives for this ride - West Chalybes. 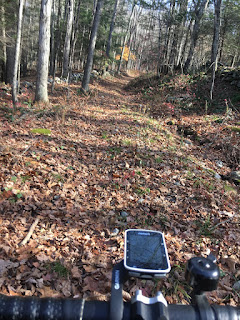 I had heard earlier this summer from another local gravel rider that West Chalybes was more passable so decided to find out for myself. It certainly was cleared out more, probably due to the fact that were a few for sale signs on the property north of the old right of way. 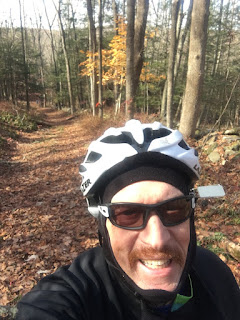 I was able to ride most of it but only with Granny's help. There were quite a few stop and starts along the way which made the climb really difficult. It would however be a great descent in the other direction. There was one tree down in the middle, though. 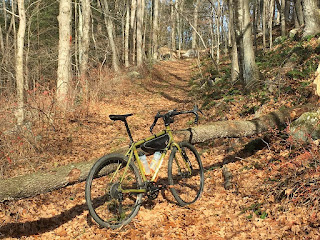 This pops out onto Hemlock and when heading north it turns into dirt.  At the end of the road you can go right and pick up Judd's Bridge from where it starts off of Route 199 or I like to ride down to Spargo Road, which is a little dirt climb to Judd's Bridge. 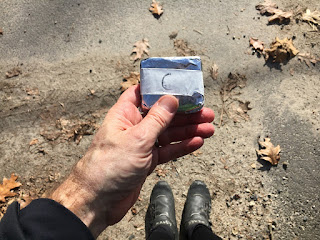 At the bridge it was time for a treat. My last Steve Taylor energy bar. The last time we rode together, over the summer, he left a few with me and they are simply out of this world! There are many bars on the market these days. Some started off as cookies and others are just copies of the big boys. There is  even a local addition from Woodbury, CT that is pretty good, called Real Energy Bars. They are good but the packaging is over done and they come in a holder that you might think is edible, it is not. 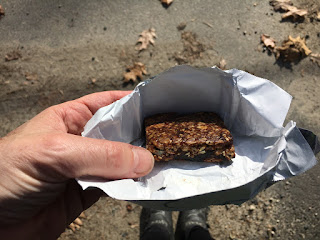 I think what sets Steve's bar apart from the all the others is the ingredients. It's chock full of nuts, grains, and seeds to give you the protein boost you need for a long day in the saddle. Then there's jelly/fruit mix that holds all that protein goodness together. It kind of reminds me of those old Peanut Butter cup commercials where there's a guy eating a chocolate bar and another eating peanut butter from a jar and they collide. A piece of the chocolate ends up in the peanut butter and some peanut butter lands on the chocolate. Both guys are in heaven with the flavor combination. That's what Steve's energy bar is like - it's like if you combined an energy gel with a granola bar from Trader Joes. 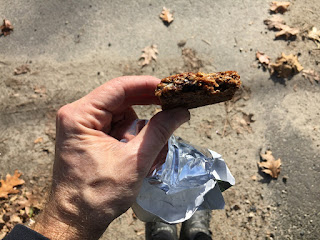 The other great thing about Steve's energy bar is it's compact size. Smaller than some of the current bars on the market but still big enough that you feel like you actually ate something and you are not jonesing for more. Yeah, there are bars in all shapes and sizes but Steve's energy bar is compact enough that you could bring a couple in your jersey for a longer ride, I can fit two in my small top tube bag for my road bike and still have room for a gel or two. 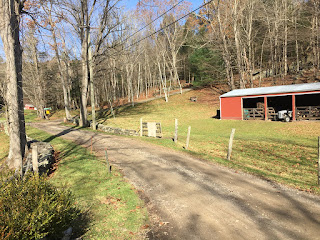 After lunch, I headed up Battle Swamp. I vividly remember the last time I tried to ride Battle Swamp because I ended up walking the first part. I recall that the road was really dry and I couldn't get any traction.  The initial section of the road starts out at 10% and it tends to be really loose and chewed up from the cars are breaking hard so they don't end up in the Shepaug River.

The climb is less than a half mile with an 10% average grade and the steepest section gets to over 18%! I lucked out today given all the rain during the past week and the colder temperature made Battle Swamp a hard packed surface. This is road is a punchy, short steep climb that I didn't need Granny's help on and got a PR on it to boot!  Then it was on to Moosehorn, another double whammy, mile long steep climb. Since it has a dip in it the average grade is only 4 or 5 percent but when you single out the two steep sections, the first climb is averages 8% and the second climb is 10%. 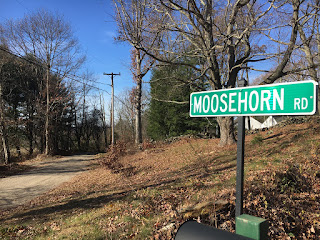 The grades on these two roads are pretty intimidating and I guess it might be one of the reasons I usually don't ride them. The other issue could also be favoritism. My usual route is climb the steep section of Judd's Bridge and then descend back down to Walker Brook and then ride north or climb up Shinar Mountain. If I am coming back down the old Shepaug RR bed I am thinking the end is near, assuming I started at the Roxbury Market, or I am dreading the fact that I still have another 10 miles to ride to get back to my house, adding Battle Swamp and or Moosehorn to the route is usually never a consideration. 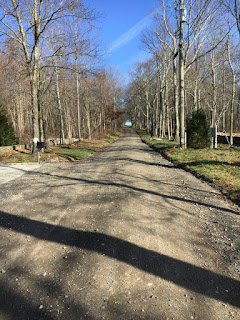 Then I headed down Dorthy Diebold and then over to Lower County, both of which head south and trend downwards the further you ride, giving you a rest of sorts. I turned east on Old Roxbury Road.  It's a steep descent with a 90 degree turn on the hill but then rolls out nicely. There is a little punchy up midway through and then another nice descent.  Then I headed up to Grassy Hill and I had forgotten what a challenging climb this road is. It's 8% for nearly a mile. The right of way portion of the road continues through the woods but I opted to ride through the field to Upper Grassy Hill Road. 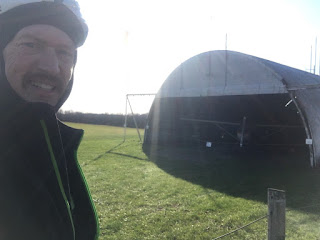 At the airport hangar I checked out the plane but it looked like it had not been used in awhile. The grass strip certainly looks like you could land a plane here but the planes at this end of the runway look like they haven't been flown in years. 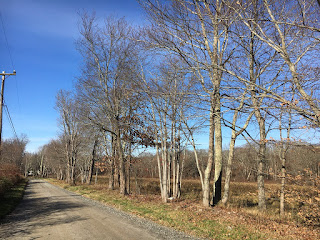 Then it was over to Welton Road off of Good Hill.  Welton is a great gravel road descent that eventually spills out onto Gold Mine.  I have only ridden the dirt roads over here twice and need to incorporate them more into my routing because they are fun.  Coming off of Gold Mine you can head back towards Dorothy Diebold/Upper County Road via Booth which has a short but steep climb. 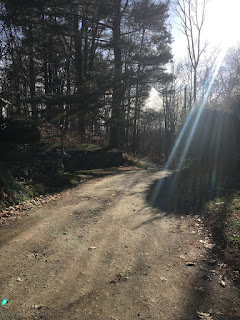 On today's ride, however, I went down Bear Burrow, which I have only been on once before and in the other direction. That climb is figuratively and literally a bear! Bear Burrow turns into Cross Brook and I had wanted to try a section that dead ends to give way to a trail back Trophet but missed the turn.  However, I rode up the north section of Cross Brook after Painter Hill and while it was paved, it was still a formidable climb, the first half mile has an average grade of 9% and overall, just under a mile it's 7%. There is a little dip, which is dirt, that brings it down somewhat. The road dead ends but technically keeps going as a trail.  Once back on the road it turns into Holmes Road and it's a wild half mile descent at 6.5%. 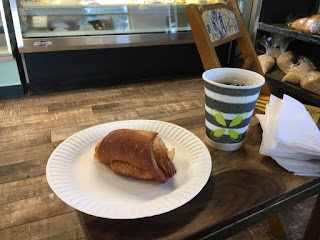 And what do you know, riding back towards Newtown I happen to pass by my favorite French pastry shop, Ovens of France. Had to stop to warm up with a hot cup of French Roast and a Ham and Cheese croissant. My first one of the year. I have been eating the Almond or Chocolate Almond Croissants exclusively this year.  This was a good break because the temperature was starting to drop and I needed to throw on the snivel gear that I had taken off after riding through Waldo. 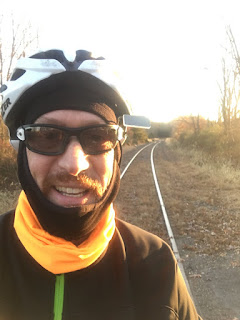 After OOF (Ovens of France), I took the dirty route home which consisted of Crook Horn, thru the park to Old Field, and then over to Flood Bridge.  From there I rode across the Rt 84 Rochambeau Bridge bike lane and into Sandy Hook. Lately, I have been riding through the northern section of Fairfield Hills to avoid the 9% climb of Wasserman Way and today I went that way, as well, only took the Old Farm road up through the Catherine Hubbard Sanctuary, over the tracks and riding the grass easement to Queens Street. 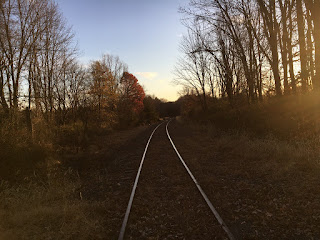 Near my house I got two more tasty morsels by taking Old Echo Valley Road, riding across the old Central New England/New York Central railroad bed back down to Echo Valley and then left onto Tamarack.