As a Newtown resident and a cyclist, getting buzzed by cars is common. The law says that you have to give at least three feet of clearance when passing a cyclist. On many of the town roads there are even signs to remind drivers of the law. 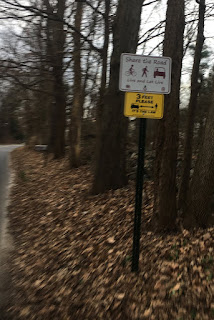 Unfortunately, these reminders don't seem to be getting through because I am often buzzed at least once every ride if not more. A friend of mine was riding through Newtown on Wednesday, November 27th when he was buzzed by someone who is supposed to uphold and enforce the law. This video demonstrates that the Police Officer not only shows no regard for the law by passing the cyclist too close, when called out, threatened to cite the cyclist.


The police officer said he gave him way more than three feet and yet the car's left tire didn't even cross over the the double yellow line. I thought I would run the numbers and see if the officer was telling the truth or not. 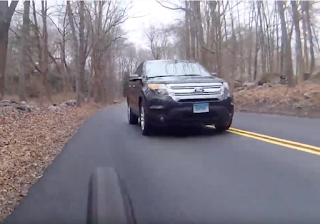 1.  The width of a standard lane is 10 feet but lets assume there is also a 2 foot shoulder so you have 12 feet to play with.

2.  I am going to assume the cyclist's wheel is 2 feet or so from the edge of the road, and the handle bars extend another 9 to 12 inches from the center of the bike, so let's call it 3 feet to the outward edge of the cyclist.

3.  Add another 3 feet for the law and that's 6 feet into the lane. That leaves 6 feet remaining for vehicles to safely pass this cyclist.

4. The width of the Ford Explorer with mirrors is 7.5 feet wide. Seeing that the tire of the vehicle is basically in the center of the road that leaves less than 3 feet clearance between the vehicle and the cyclist. 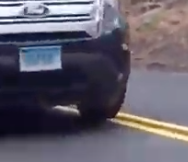 5. In order for the officer's claim of giving the cyclist way more than 3 feet clearance to be valid, the vehicle would have to be basically traveling down the center of the road. Which it is was not.


Doesn't look like the Office gave way more than three feet as he claimed.
at 1:46 AM