An abortive attempt at a new route

Two weeks ago I saw a post on Facebook about a ride where someone wanted to test a gravel route out. It piqued my curiosity and I noticed that this section of Connecticut was blank on my Roubaix to Brew gravel road map. 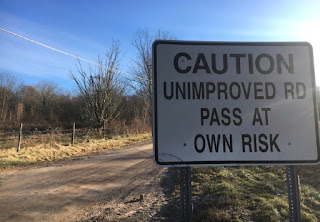 Of course this prompted me to start scouring all the mapping resources at hand to update my map and like any new route I come across I could not help but throwing in a few tweaks based on what learned through my electronic reconnaissance of the area. The ride was scheduled for Sunday and I had mentioned it to my brother-in-law, Will, but then he pointed out on the Thursday prior that it was supposed to rain Sunday and suggested that we ride Saturday instead. 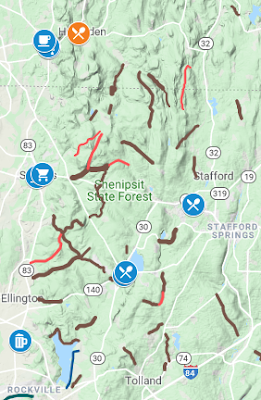 We met at the Crystal Lake Elementary School around 8 AM and then headed off down Route 140. It was a glorious morning for riding gravel, 30 degrees, sunny and an expected high in the upper 30s to low 40s. We hit First Dirt 3/4s of a mile in on Newell Hill Road and there after it was a more dirt than paved till we got to the Radio Tower at atop Soapstone Mountain. 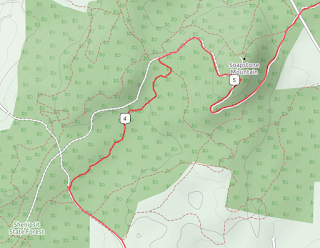 The route however had a little flawed because it had us turn onto a single track trail instead of turning onto another forest road in the Shenpsit State Forest. 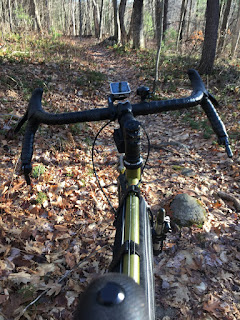 That trail was almost impossible to ride on gravel bikes and it would have been a tough ride even on a mountain bike because while the trail started out nice it quickly dissolved into a hack trail. There were a few trees down along the way and go arounds were even barely passable. 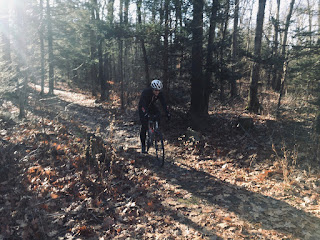 Eventually we came to a cross trail that was a lot more rideable and were able to ride out to the dirt road that we should have been on the first place.  That road brought us to Soapstone Mountain and what a view from up there! 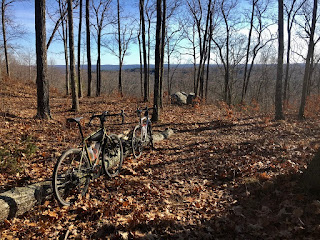 Five miles into the ride and it was the perfect time to get a bite to eat, take off some snivel gear, and get ready for the next 55 miles! 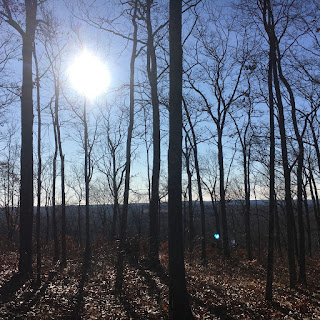 We then headed down the paved road and then picked up another dirt road through the State Forest. I don't know whats wrong with people but there was this guy walking down the road to whom I called out with my best command presence voice, On Your Left, and he went to the left, and I almost ran into him when he cut in front of me. 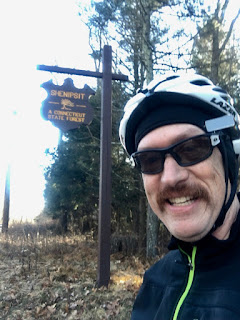 We left the Shenipsit, I keep wanting to call it Shenipshit, Will was calling it the Conipshit, and continued heading north, back onto another forest road through another tract of the Shenipsit called Avery Road. There was a CT DEEP game warden parked at the entrance which made me stop and think that maybe riding through a State Forest on a Saturday in the fall might not be such a good idea. Next time I will bring a bell just in case.

We turned off of Avery Road onto Old County Road. This road was nice for awhile until we started encountered really big puddles encompassing the entire road and then the road turned to dual track but easy to ride. Coming out of the State Forest, the road was kind of gravel, kind of old pavement that had never been kept up mixed in dirt sections. There was a brief section of pavement and then after the intersection with Lance Drive, the road turned into a jeep trail that was challenging and fun to ride. 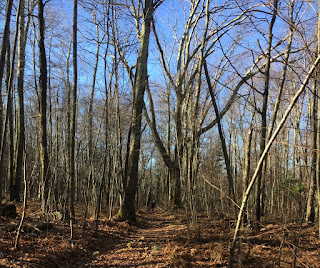 Todd, the route designer, had called this the Scully Road Route, but I had no clue to what he was talking about it until we found it. It started out with a little dirt but then quickly turned into a forest road. Most of it was rideable until we got to the old, boarded up house, and then the road turned into a century's old cart road that was rideable half the time.  After a few rideable sections and a few more dismounts the surface evened out and became more or less rideable again. After a while I found myself separated from Will so I headed back to find him coming up the trail with his bike on his shoulder. 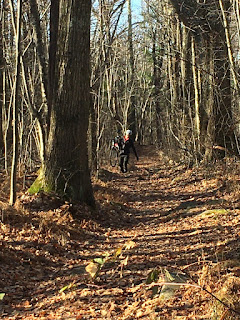 Turns out he got a stick in his spokes that bent his derailleur but didn't snap it like I have seen so many times mountain biking. I tried to bend it a little bit to stop the derailleur from catching on the spokes but it snapped! We got out our tools only to find out I didn't bring a chain tool and while he did, at first he couldn't find part of it in his bag. He found the missing part but realized he didn't have anything to turn it with. I was able to use my hex wrench, though. I rigged him up a single speed, set up at 36:28. We headed off again, riding some and walking most of the way out of this part of the State Forest. 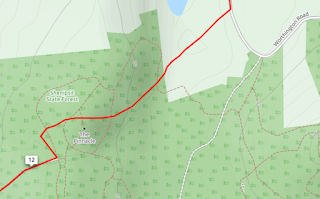 In the map above, the repair to Will's bike took place at the 12 mile marker, from that point we set off on a hike-a-bike following the GPS track but Scully Road disappeared on us.  We tried to follow the GPS Track but there were so many trails that it was really confusing so I pulled out my phone and started looking at Google Maps to get my bearings and figure out the best direction to head towards. 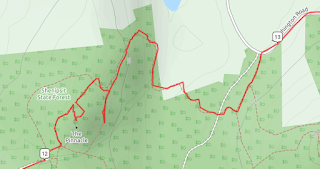 I wouldn't say I felt lost but it was disappointing to hit a section that really wasn't rideable. After coming down off of the ridge I happed to see a house through the trees so there was no way we were going to be lost, although the thought had entered my mind. We kept following an old trail that was on the map but never saw anything like a continuation of Scully Road. Eventually we found a dirt road, that I think is supposed to be the road pictured above (white lines with dashes on the sides) however it didn't line up with the trail were were on and it shows up on the map. 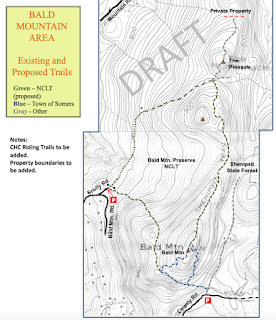 I found this map of Somers Connecticut Trails that's part of the Northern Connecticut Land Trust, and it, too, doesn't depict the continuance of Scully Road.  It would be interesting to see where that route from the Pinnacle Leads to because Will and I were initially heading down that way and it was rideable and happens to go in the direction you want to head on this loop but there is the simple matter of having to go through some private property. The other option would be to head out on Old County Road (see Version 2 of the Crystal Lake Gravel Metric) from the Shenipsit SF or bypass Scully altogether and take Mountain Road to Camp Road (Version 3 of the Crystal Lake Gravel Metric). 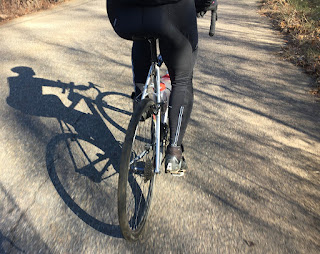 Upon finding Worthington Road, Will and I decided to bail on the rest of the route and rode back to our cars. In anticipation of this ride I found out about the Cold Creek Tavern, which brews their own beer, and we headed there for lunch. That was a great decision. 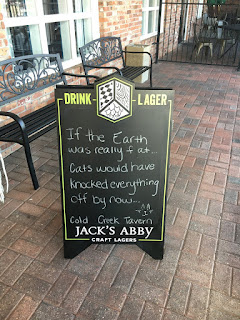 Will had the Elynour and I tried the Tavern Ale. Both were outstanding! The bar keep lets us sample the Cold Creek Shelby. This was a stout that looked like an ale. It certainly tasted like a stout but had all the looks of an ale. Once Will gets his bike fixed and our schedules can synch up again, we are coming back. Not sure whether Scully Road will be included on then next attempt or not.