Had a little time to kill midday on Tuesday so I went for a little snowshoe at Upper Paugussett State Forest.  It was an interesting day, partly cloudy with a little wind out of the northwest.  When the sun went behind the clouds it was cold but when it was out, it was nice and warm. 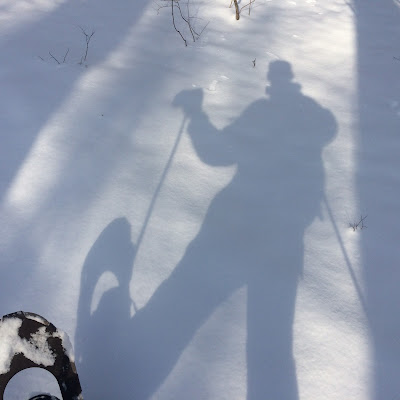 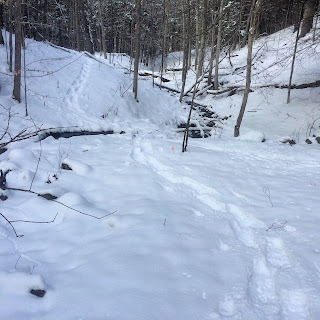 I decided to revisit the Upper Gussy extension that I have been putting off from building.  Given thestate of the Mulikin Trail further uphill I think this spring I am going to have to do something now. Going up the Mulikin Trail, I noticed some fresh purple spray painted blazes.  I connected with a mountain biker through Instagram who was on the trails after me and who rides here all the time.  He was riding the trails at night and called this the White Trail.  Funny, never heard it referred to that but since half the trails aren't really marked I am sure local folk lore will develop on it's own.  I still have no desire to fat bike. 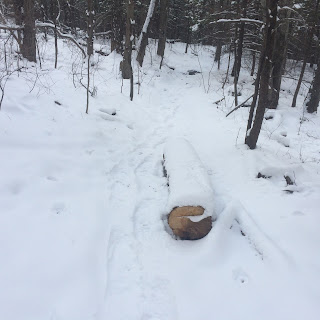 Looks like there was new blow down that someone came in and took care recently.  Surprised there is no ramp on this log because that would make an awfully nice skinny. 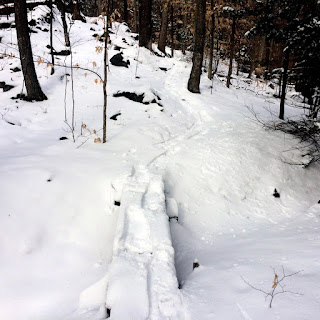 At the top of the Mulikin I continued south on the Unmarked and Unsanctioned Trail.  It's too bad this trail is so linear because this part of the forest has so much to offer in terms of features to ride and variation of terrain.  From here I turned onto the Gussy and headed north again. 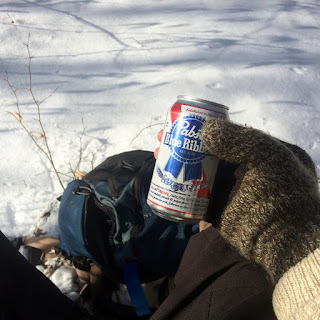 Before turning down the Yellow Trail I stopped for a little liquid refreshment on the up and over. An ice cold PBR was excellent after 3 miles of traipsing through the woods.