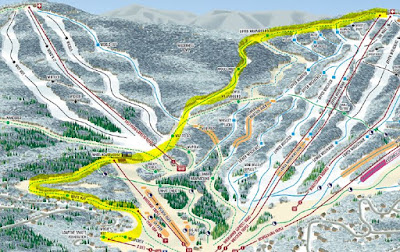 This was my fourth day of uphill skiing at Windham Mountain and I planned to try the new trail called Wolf's Prey to get to the summit of the western peak after two previously failed attempts.  Of course if I had all day, the two previously failed attempts would have been successes but my activities are tied to the time my son is out race training. 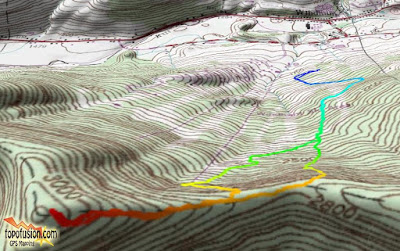 The Trail Map that Windham offers is very misleading because I found that Wolf's Prey was essentially straight up.  I grabbed a water break on a corner section of the trail where there was a rock I could sit on and take a little rest. 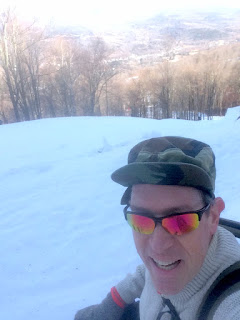 It was 20 degrees when I left Adaptive Sports Foundation so I stuck with three layers, the outermost being just a sweater.  My old Army BDU cap is great because it has ear flaps but after the first 100 yards of climbing they were no longer needed.  After my little rest break I attempted the final wall of the trail.  Up to this point the trail had quite a few steep pitches ranging from 20% to 40% but the final wall had to have been at least a 60%! 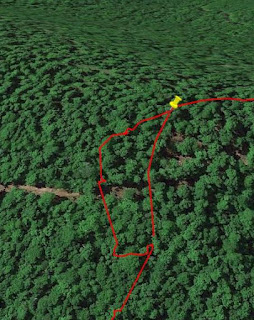 There was too much sugary powder on the side to get enough traction at that pitch.  In fact, I had to side step but with the skins covering my edges, that was difficult.  While traversing laterally across the trail I realized and having no edges I went down and slid for 10 yards.  I was able to stop myself and then finally get to the other side.  I found a flat spot in the woods and took off my skis and walked through the woods! Up to the mountain bike trail, the pitch was 49% and I was on a angle (you see where the trail is in the picture above in the middle and to left).  It was a tough climb carrying skis on my shoulder and poles in the other hand.  I consider this the Walk of Shame! 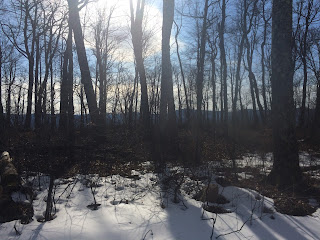 Compared to what I just went up the final stretch to the top of the mountain was flat.  Along the ridge and through the trees you can see Hunter Mountain. 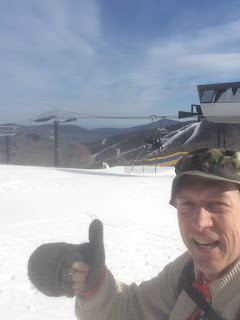 Grabbed a quick bite of a Cliff Bar, took off the skins, got my jacket and helmet on and headed back down the mountain.  I was maybe 100 feet into Upper Wraparound (the route that I should have taken) when who should come screaming past me but my son Elliot with his Guide de Jour, Mary Alice! 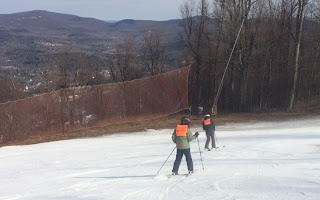 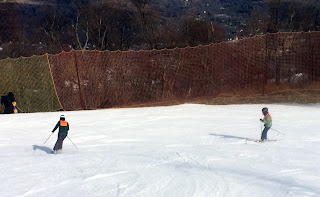 My quads were screaming on every tele turn I was making and I could barely keep up.  Eventually, I caught up with him further down down the trail. 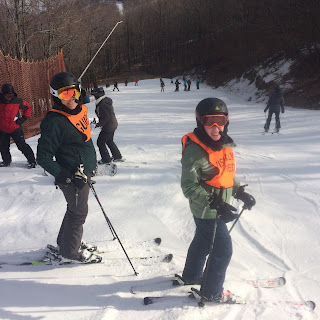 He was having a blast of course!

Next weekend I am going to try a different route and do the Western Summit entirely on snow!