Woke up this morning to find out school was delayed 2 hours and figured I wouldn't riding to well after 2 because of a call I had to take.  20 minutes later, the town broadcasts that school is now canceled and there isn't any new snow on the ground.  However, last night we did have one hell of a storm last night with lightning and wind.  Turns out the storm caused 23+ road closures and knocked out power to 10% of the town. 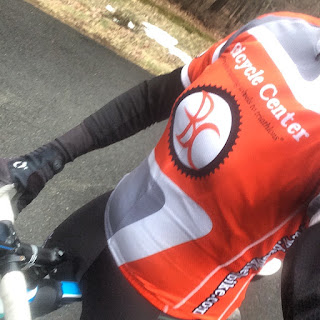 Temperature this morning was almost 60 degrees but I didn't take any chances and layered accordingly with leg and arm warmers and my new bib shorts that my kids gave me for Christmas. Found my old shoe covers and threw those on over my summer cycling shoes.  However, 30 minutes into the ride the weather drastically changed by dropping 10 degrees and started to drizzle.  I was warm enough but a shell would have been nice. 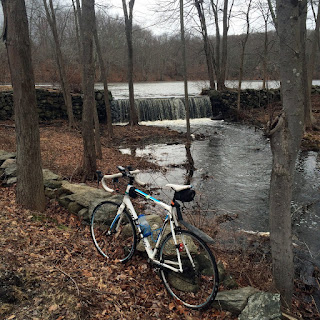 All the streams were swollen and the ponds were overflowing. A lot of water over the roads, too, and I was glad for the fender.  I was tempted to ride further into Monroe but decided against it because I had no idea what roads were closed so I did my basic look and tacked on Tunnel & Taunton Roads on the way out and Sandy Hook on the way home. 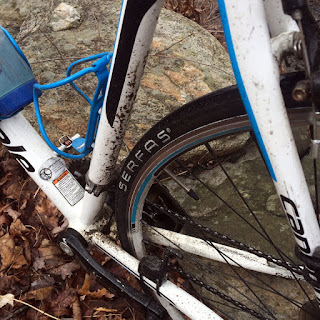 I am really loving these new tires from Serfas.  I am running 110 psi upfront and 120 in the rear and they ride really solid and feel great, even on wet roads such as today.