Using topographic maps from The Historic USGS Maps of New York and New England, I loosely put the 1899 Northeast Corner of Millbrook, NY map and the 1903 Northwest Corner from Cornwall, CT map together to show the original route of the Central New England Rail Road.  There is a Y in State Line, NY where the Newburgh, Dutchess & Connecticut Rail Road connected to the mainline.  Sections from Lakeville to State Line are visible but not all rideable (or allowed for that matter). 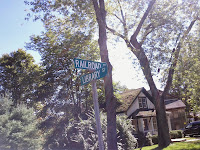 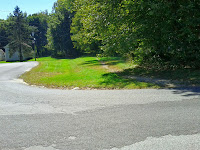 There is a two mile section of rail trail that starts in Salisbury, CT and ends in Lakeville, CT called the Railroad Ramble.  Along with the Harlem Valley Rail Trail, this was another on the Rail Trail bucket list.  The entrance in Salisbury is quite unassuming and the exit in Lakeville is event worse.  It spills out into a playground with no signage indicating which way to go.  I followed my nose and came out using the Park's Driveway by a gas station.

The Railroad Ramble is much rougher than your typical dirt path rail trails but not a was rough as the Woodbury Trolley Trail.  Definitely mountain bike, cross bike, or even a comfort bike would be best suited for this trail.  The Fredmobile was perfect, the 1" travel shock was just enough to soften the roughest of routes. 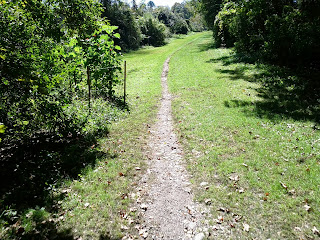 There were no bicyclist on the trail and the only other trail users was two joggers.  Then again, noon in Northwestern, CT, with almost two miles of trail, this seems hardly the type of trail that people would go out of their way to visit.  Too bad there is no connection back to Canaan.  Of course, the Coup de Grace would be to have a rail trail that went all the way Winsted and then down to the Farmington River Trail. 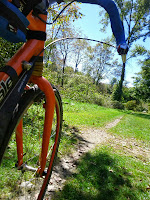 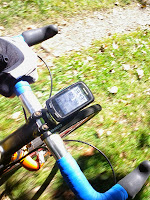 Little did I know when I took a picture of my Garmin that I was at the half way point of my ride. 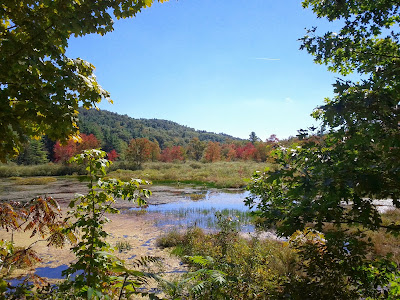