I was really wondering whether I would be able to race on Sunday after losing two days to this nasty virus that ripped through the house the prior week.  Friday, I got a singlespeed commute in but that ride was hardly as strenuous as a SSAP race would be. 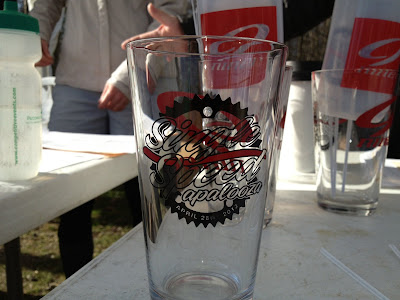 On race day, I over slept, but fortunately I packed everything the night before so all I had to do was throw on the kit and jump in the car.  I was 10 minutes late picking up Glenn who wanted to tag along and spectate.  Glenn and I rode Stewart last weekend and I am pretty sure he will be riding SSAP next year.  Since I didn't have breakfrast we stopped at Dunkin's on the way and lost some time due to slow people that work there.  Got to Stewart around 8:00 am but that's because we stopped at the Truck stop and exit back because I needed the crapper; pre-race jitters.
Ran into Nick Carll, a NEMBA member from Maine that I know from the Interwebs.  He and his race team, Giant Hawk had very elaborate team jerseys planned but didn't get them in time and had to improvise.

My race strategy:  I am only here for the beer!
Make it to the beer stop
and finish the race and proceed directly to beer tent!
Holding to that strategy, I started out in the back of the pack of NY Sport class.  The only thing that sucks about that is all the dust from the FRBs (Front Riding Bastards - stole this from the Hash House Harriers) while riding down Ridge Road.  I was chatting it up with Charlie from Saratoga on a purple Canfield Brothers Nimble 9, a frame that I was contemplating at one point but turning onto Major Mike my front brake cable started rubbing the tire and I had to stop to fix that.  Unbelievably, that was my only issue for the whole ride if you don't include the banana incident.  Last year my cranks fell off three times and I must have dropped my chain 10 times. 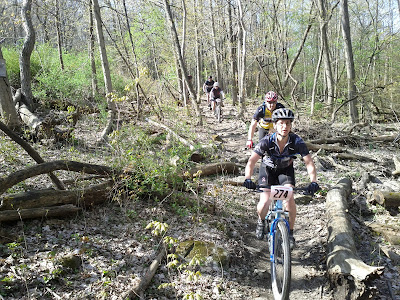 There was this huge pack of riders on my tail on Major Mike so I pulled off and let the big conga line pass and got the opportunity to snap a few pictures. 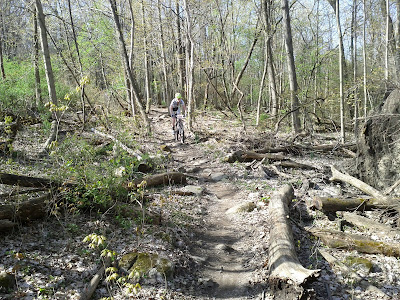 And who should be bringing up the rear is last year's Women's winner and Ridgefield Resident Kristen aka @cyclocrossgal.  I took off after her but she was long gone by the time I got to the top of the next climb. 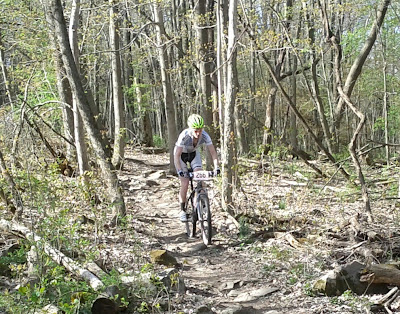 Except for some minor tweaks here and there the course was pretty much the same as it was originally supposed to be but at the Ant Hills singletrack was out due to illegalness of the trail the course.  Ironically, the course changes headed into Prime Hill, which is some of the trail that I rode two weeks prior when I got lost.  This is where I picked up this guy Sean from NJ riding Misfit with flats.  We stayed pretty much together the whole time till then end. 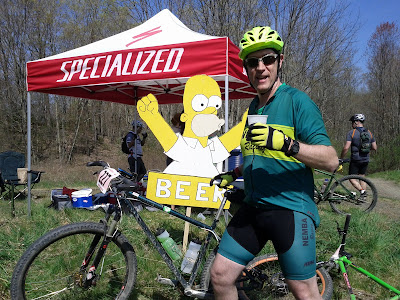 Woohoo!  Free Beer!  At the 14 mile mark was the neutral feed zone, aka beer stop.  Newburg Brewery provided the beer and it tasted like a cross between a Koelsch and Weissbeir.  It tasted pretty good.  Seth Page of Team Giant Hawk took the picture.  At the beer stop I ran into Charlie again.  We all took off again and kept passing one another here and there for next couple of miles. 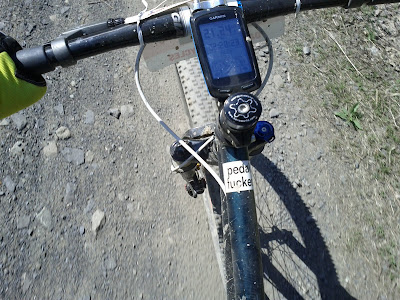 Before turning again onto Ridge Road I decided sugar up with another Gu, finish my remaining Powerade, and eat my last banana because the last three miles is on Scofield which is a total bone shaker.  My first bite of banana was great but when I went to take another I just bit into nothingness.  That chunk fell off somewhere so I finished the rest and wondered what happened to that second piece of banana.  I got up on the barends to get a slight rise when I looked down and wedged between the fork stanchion and the quick release tab on the front wheel was my missing chunk of banana!