Big Friday RAW On the Spot

Been awhile since I had been On the Spot so Friday I took it out for a little lovin, but the ride turned out to be far from little.  This time I brought a light because it's getting darker earlier now, and I brought a bell after not just one but two encounters with hunters already.  Nothing happened, it's just knowing that there is some eager beaver out there with a loaded gun  that I am riding up on is a little unnerving.  Leg guards but in hindsight I got lazy and forgot the arm guards. 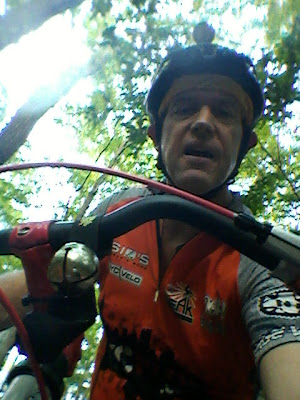 My love hate relationship with the FUBars kicked in again while climbing the Mulikin Trail.  Again, it goes back to I love positioning of my wrists for climbing (they help you stay seated for climbing) and descending but they feel a little squirrely in the control department.  I think if they were just a bit wider I would be happy.  At the top of Upper Paugussett I forgot about all that minutia and really started enjoying the ride. 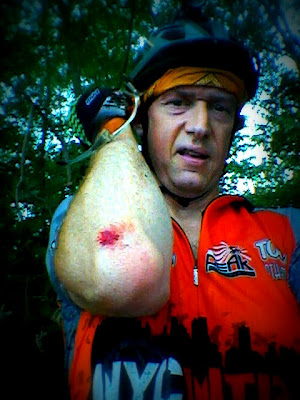 That is of course until I hit this one roller climb that I stalled out on half way up and then lost my balance while unclipping out and fell backwards with my elbow landing on a rock.  My fear, given my condition, was that it was going to bleed a lot and I would have have to consider trying to take care of it or bailing.  Of course I was cursing myself for not wearing my arm guards.  I decided to continue riding without doing anything for it and just keep an eye on it.  Looked worse and barely hurt after a minute or two.  Of course riding back through the pricker bushes on the old Hartford and Erie Railroad bed later towards the end of the ride kind of aggravated it some more but it wasn't a lot of trouble. 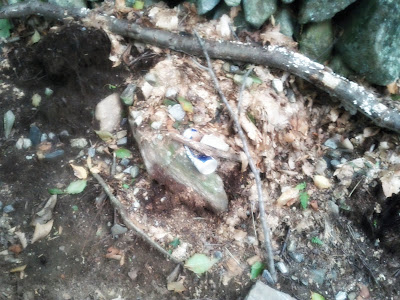 Had a nice up and down the Gussy ride.  The reach around looks like others have found it, too, but there is one turn that I am sure everyone is missing.  Coming back up the Gussy, I fell again but nothing as gory as what happened earlier and of course arm or leg guards wouldn't have helped.  The climb was good and I cleaned a few sections that have bailed in the past and vice-a-versa.  Found another Michelob Ultra can on the Poly Brody!  This has to be from hunters, and in fact my guess is that it's probably from those two hunters I encountered last week.  I mean come on, who leaves their keys under a rock on a rock wall?  That's what they told me because he had to double back to get them.  BS.  I think they left a few road sodas back there and when they heard me flying down the trail they ditched them. 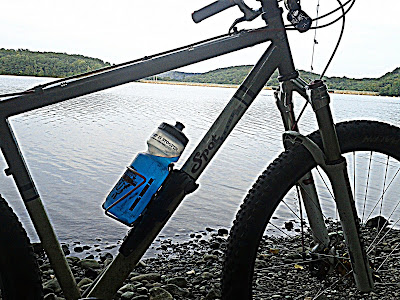 With still plenty of daylight and since I brought my headlight, I decided to take a spin on To Al's Trail.  It's been a couple of years since I have ridden those trails and actually I have been avoiding them largely because I thought they would be a mess after the two storms we had last year but it was surprisingly good.  The section from Albert's hill to the back of the Vineyard is nice single track, then between the Vineyard and Lake Zoar it's all Dual Track and horse trails until you get back to the old Railroad line. 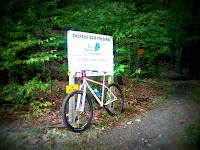 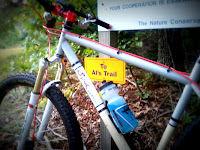 I am going to have to ride back here a little more to figure out all the trails because if I recall there might be some good loops in here.  Might not be the most challenging of trails but it will add miles to my regular Gussy riding.  I think this might also call for riding the Dingle Brook Trail, Upper Paugussett and the Shady Rest Trails and seeing what kind of epic ride I can get out of this.  There was a weird mountain bike race a few years back on the Vineyard property called the Grapes of Wrath but the trails for that have long since been overgrown, not to mention they were all fall line climbs and basically sucked. 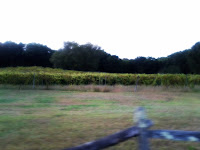 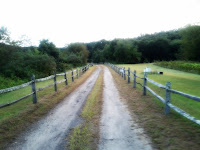 I decided to ride back through the Vineyard on the old Railroad bed .  It's really nice through here but when you get off their property and across Alberts Hill it turns into a jungle!  In fact, it was so bad my cassette snagged so much stuff that I couldn't change gears and rode home in first gear! 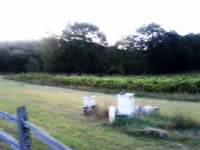 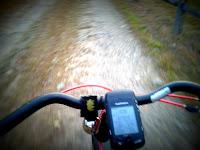 I don't think I will ever ride through there again, perhaps only in Winter.  It would be fun to XC Ski that section and the Shady Rest trail for that matter.  Hmmmm, hope we get some snow this winter!  When I got home, I stripped down to the skivvies and rinsed off with hose water in case I picked up any free loading, disease carrying, blood suckers, while enjoying a Gansett Fest! 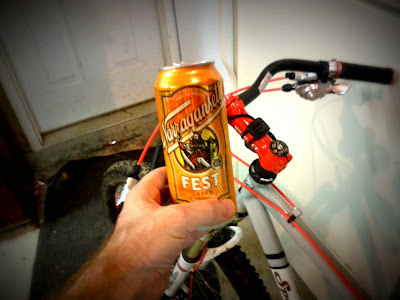 Sounds like a great ride! What kind of bell do you use?

The hunters around here sometimes use a trail of beer cans to mark the path to their tree stand. That's reassuring...

I got this bear bell at Cabelas awhile back that I think is for backpacking. It has a silencer, too! The velcro strap is perfect for the bars, too.