The Weirdo of Waldo 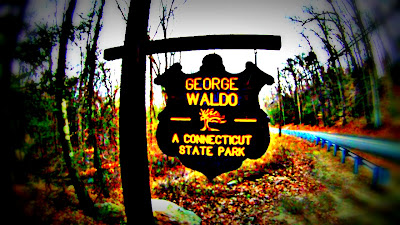 Headed over to Waldo Saturday afternoon when a Get out of Jail Free Card landed in my lap at the last second.  Saddled up the diSSent because I thought I fixed my gearing issues only to find that I didn't.  Like the Upper Gussy, Where's Waldo is very Single Speed friendly so I did worry too much about my gearing.  On the way, though, I came across a hiker bushwhacking off of Daffy Duck looking for the parking lot.  I looked down at my GPS to tell him how much farther he had to go when I saw that I forgot to turn it on from the lot!  Oh Crap, you know what that means - got to ride back to the lot and start over.  Call me crazy or OCD but I have to have a good track.

Back on the trail and having a great ride I tried the Daffy Duck trail in reverse, actually I missed the turn and the only reason I realized that I was on the wrong trail was because I had to stop for a tree that was broken half way up and hanging down into the trail.  Seeing this I realized the surroundings looked a little unfamiliar and that is when I realized I was on a different trail.  Daffy in this direction is really fun. 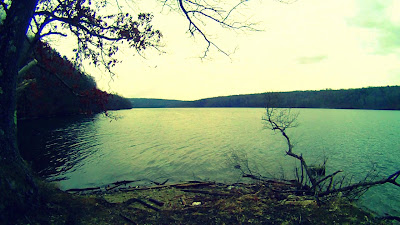 There were a few cars in the lot but no one down by the water.  Hard to believe this is February, especially after last winter.  With my gearing issues I decided not to ride Extra Credit and instead rode back to the Hunters Trail to where the portion of the trail that I by passed riding Daffy and went back that way. 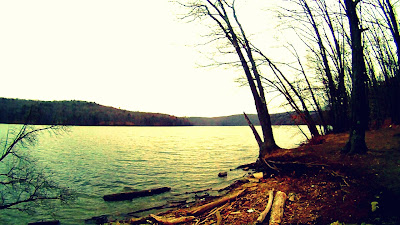 I was really hoping to run into this guy that apparently thinks he owns the place and has been putting notes on people's car and berating people in the parking lot.  I have yet to run into him but from what what I have heard this guy is a real nut job, The Weirdo of Waldo, with a sense of entitlement about Waldo.  Probably need to hit the place more during primetime than late afternoon.
at 6:00 AM

That is a nice, little known park. Hard to believe you found someone lost in it. You should have told them to buy a compass!