When the pavement ends the fun begins 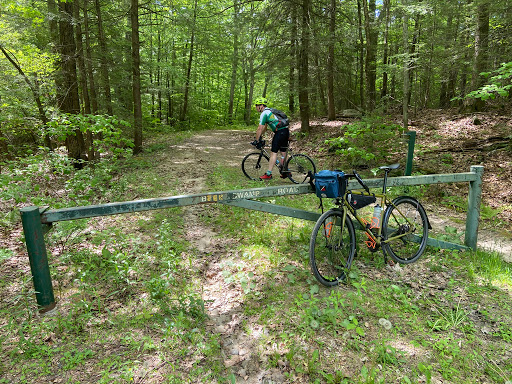 There was a post on the CT Gravel Grinders Facebook Page about someone looking to ride gravel between Mohawk Mountain SF and Mountain Tom that Mike alerted me about.  I posted up that I was interested and wondering if the ride leader had a route in mind. He did not so I drew one up on RWGPS using my Roubaix to Brew dirt road map. I have ridden a few roads in and around the forest but I knew there was more to sample so I started looking at the USGS Topo and the State's Map of the forest and found some additional roads to explore. 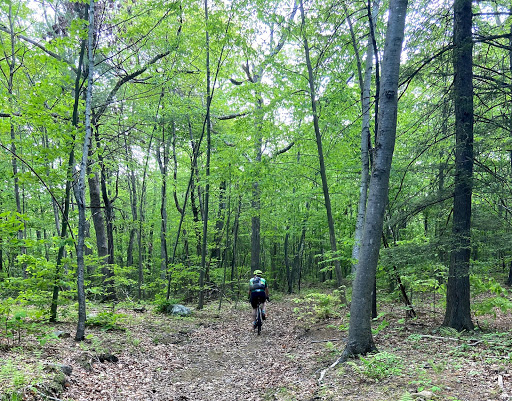 The ride started with Mike, Marshal (a recent college graduate who just got into cycling and was friends with a high school friend of Mike's son), Roy the ride initiator and myself. The weather was supposed to be hot but starting out it was kind of cool and overcast.

We headed out on Toomey Road and then turned on to a forest road that the State Map listed as Tracy Road and was supposed to be dirt road. It turned out to be more of forest road/dual track but hey, dirt is dirt and this was first dirt, too. We popped back on to Toomey Road and followed it out to Turkey Hollow Road.  This road turns to dirt and dead ends in a some sort of quarry. According to the Topo map there was a road that connected Turkey Hollow to Thompson Road in Goshen. 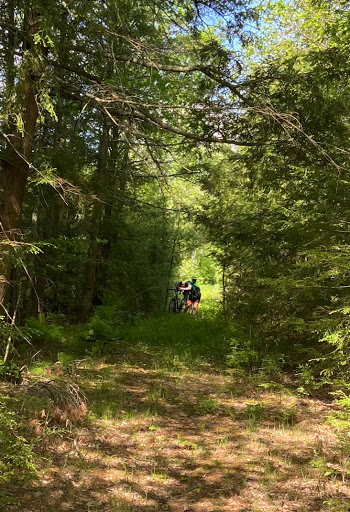 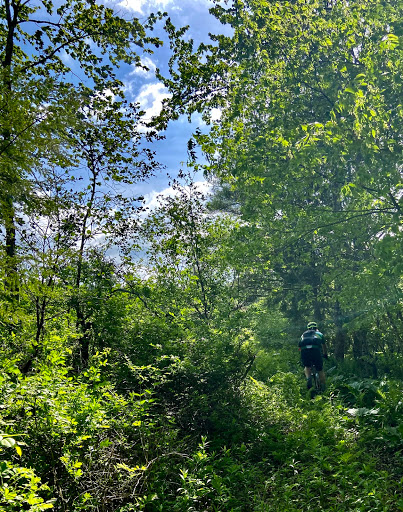 It was rideable initially but for those that didn't put on the bug spray before leaving the parking lot found that there were a lot of ticks. Roy said he pulled 8 of them off him! 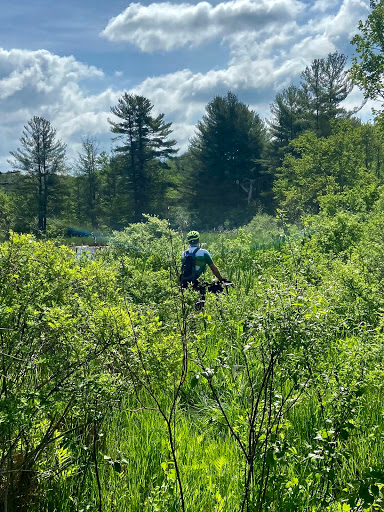 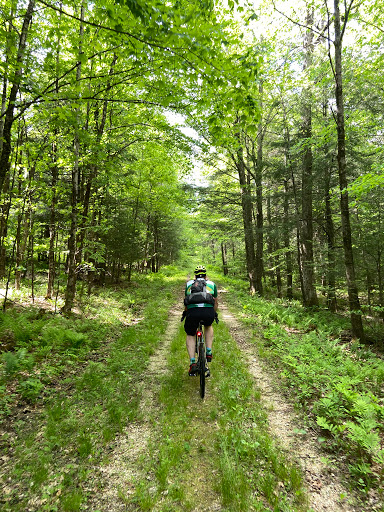 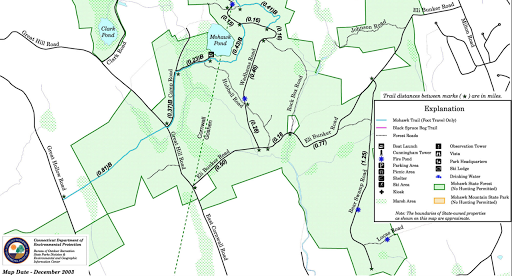 The State map indicated near the end of Bear Swamp there was a road/trail called Lucas Road and our goal was to ride that back out to Milton Road because I couldn't tell if Bear Swamp went all the way through or just stopped in someone's backyard. 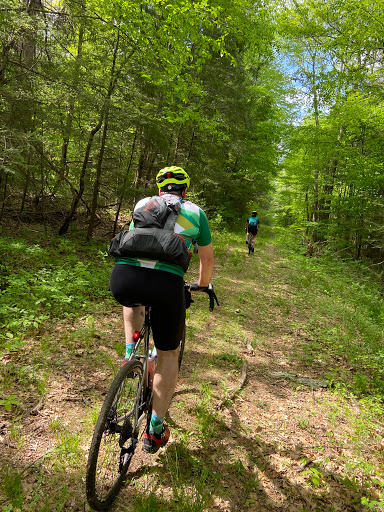 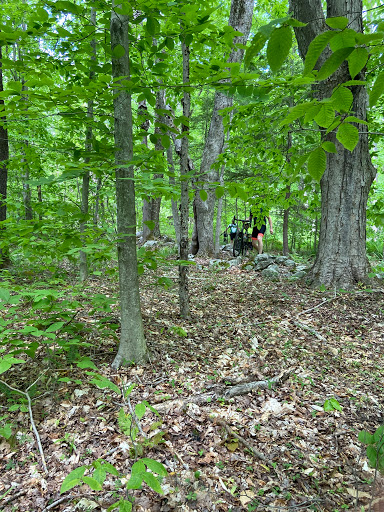 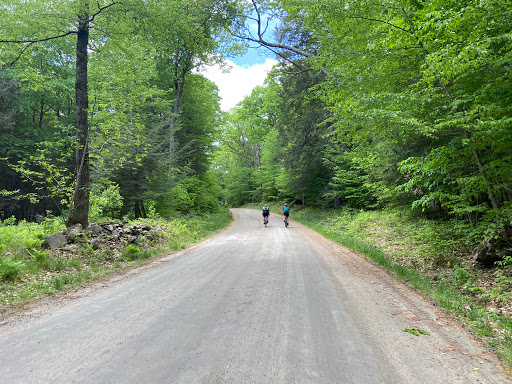 Eventually we found the other end of Lucas Road only first by riding through a freshly mowed hay field and then walking up through someone's backyard. Then it was a short descent down Milton Road to Shearshop Road, which is a dirt road that brings you into the heart of Milton. At the town green I discovered my rear tire was going flat so I changed it in the shade by the side of the road.  The temperature was starting to climb, though. 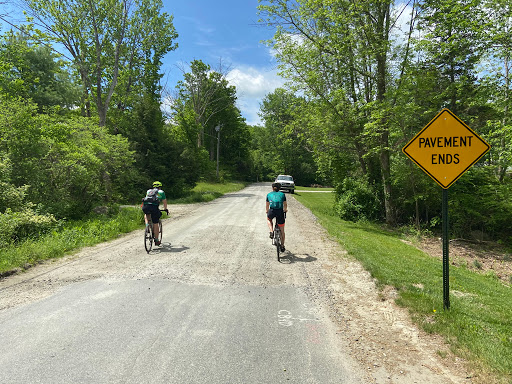 Mike and I, along with another Newtown Lunartic rider, Scott, road most of this route in the other direction 4 weeks ago.  What's nice is that the route alternates between dirt and pavement all the way down to Rt 202.  Turning onto Old Mount Tom Road there is an insane dirt road climb that is about a mile long and averages 7% with a nice little 17% kicker at the end.  Prior to riding this hill Roy decided to turn around and head back because the heat was getting to him. 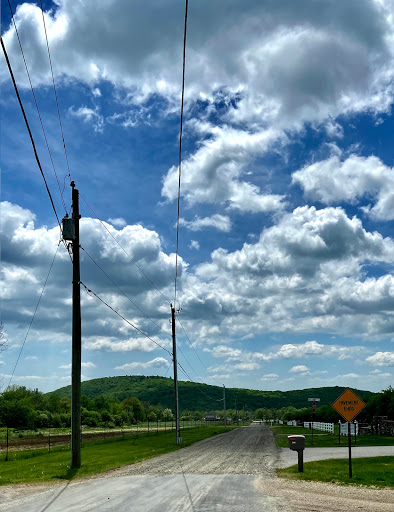 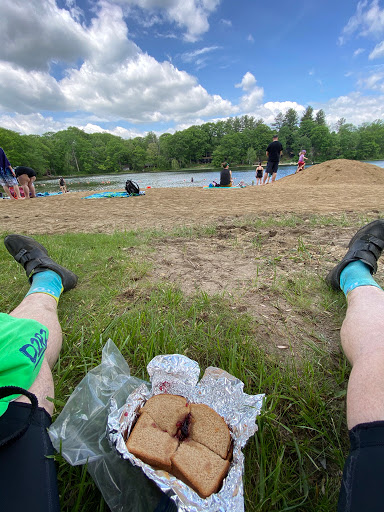 We ate our Peanut Butter and Jelly Sandwiches at the beach 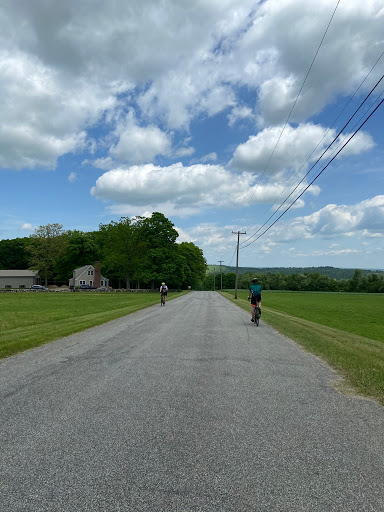 Fearing another Death March we opted not to look for the back way to Romford Road and continued on the route to the hill that combines Couch and Jack Corner Road. We climbed for 1.2 miles at an average grade of 8% and a max of 13.6%. 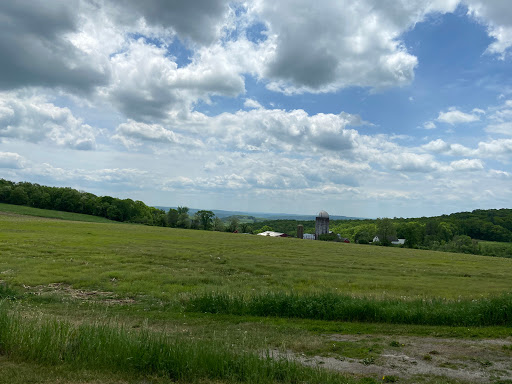 While this would be the biggest climb of the ride it wasn't the steepest.  However, at the top there were cows! 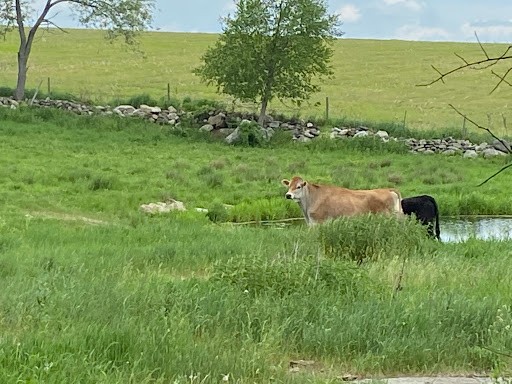 This might not have been a very long ride but it definitely had a lot of vert, over a 100 feet per mile. 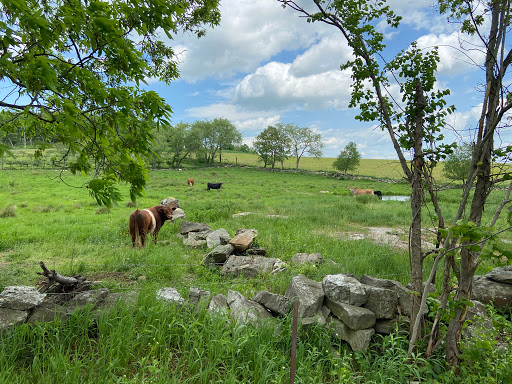 Next came the biggest climb of the day - Angevine Road 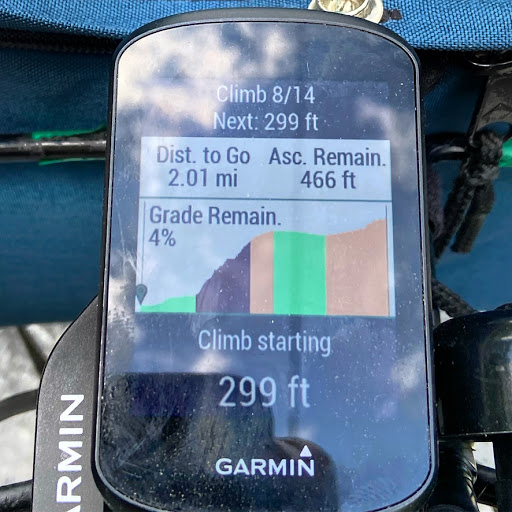 Garmin Climb Pro showed said the steepest part was 22% and RWGPS says 20%. Whatever the actual grade is, it was steep, but it was a necessary evil in order to get to the closed off section of the road that connects to Hard Scrabble Road. 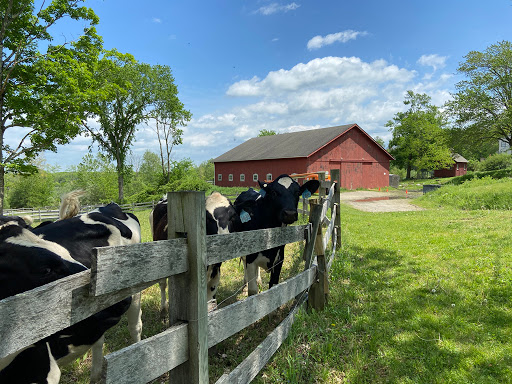 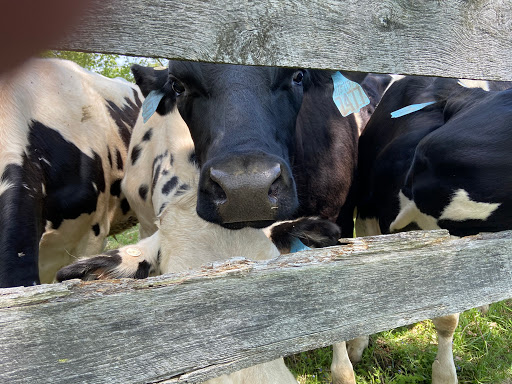 These guys were pretty curious 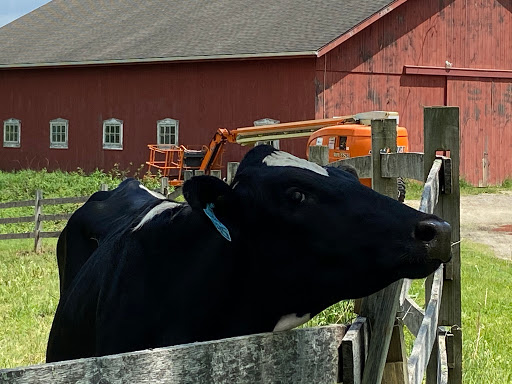 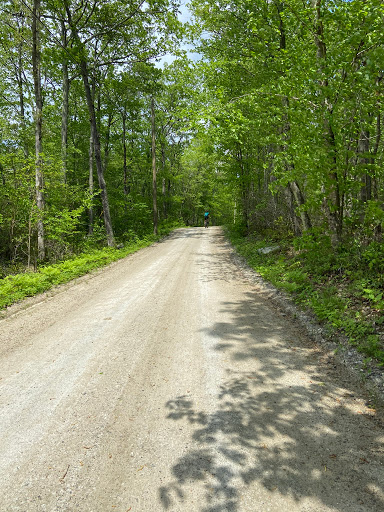 It was nice to descend Seely Lane this time 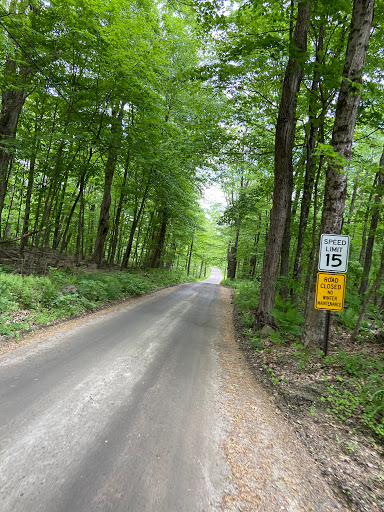 Eventually we came back to the other side of Eli Bunker 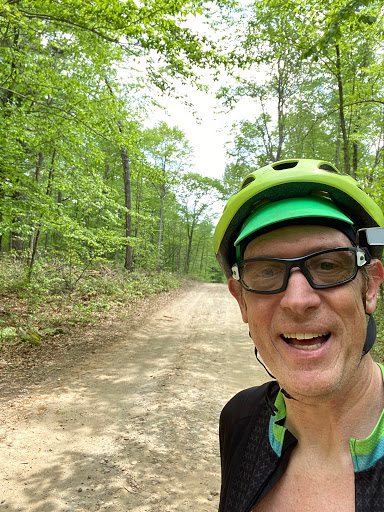 Turning north we headed up Waldhams Road, which was a pretty good dirt road with quite a bit of vehicular traffic 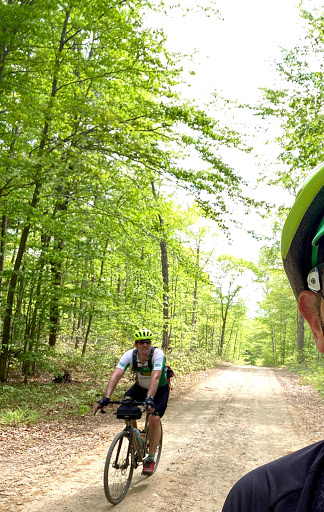 It is, however, one perpetual climb up Mohawk Mountain 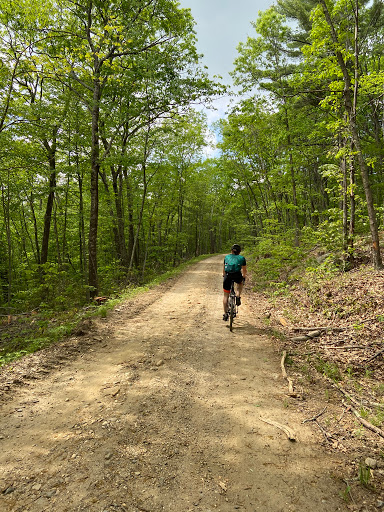 It just kept climbing until we got back to Toomey Road and then started descending back towards the parking lot from where we started. 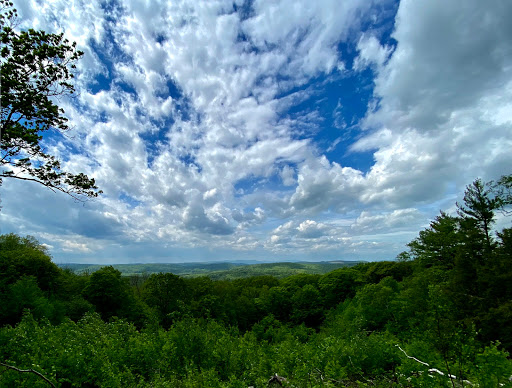 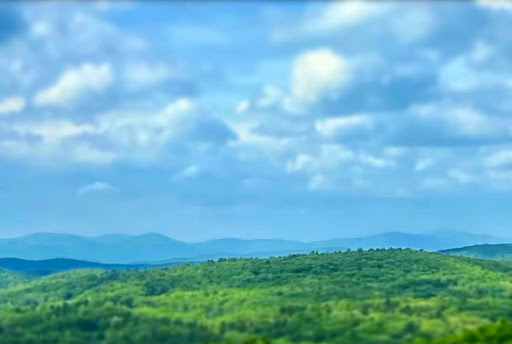 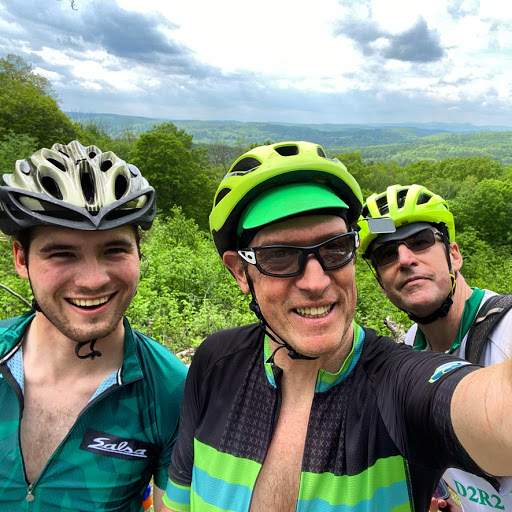 By the time we got back to the cars, we were hot, exhausted and out of water.
Fortunately, I had a cooler of ice cold Leinenkugel's Summer Shandy.
at 9:00 PM