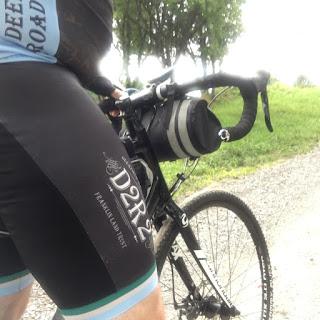 After working around the house one Sunday I headed out on the CAADx for a little Gravel Ride in the Lower Litchfield Hills. I needed to get some gravel miles because D2R2 was next month and there was that looming question of whether or not I would ride this bike then. I started this ride at the I-84 Exit 14 commuter lot, hit Flood Swamp road and then climb Flat Hill, which is anything but flat! 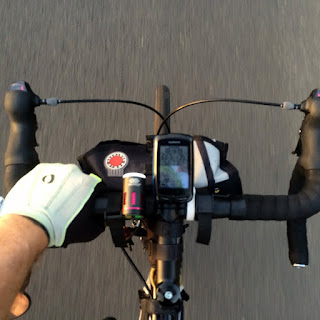 Of course, I couldn't have picked a warmer day for this and being in the afternoon and Flat Hill being mostly in the sun it was a slow grind up this hill. While I probably could have done it with a 28t the 32t I put on earlier in the week really made a difference. Also, I had to bring the bike into the Bicycle Center because I noticed after a few rides that the shifting was whacked and the adjustments I made didn't help. Turns out the hanger was bent. Let that be a lesson, if you ever buy a bike from Craigslist, have your shop go over it first. 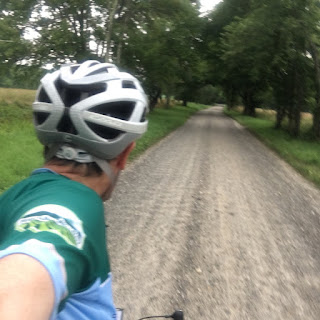 After Flat Hill, I rode down Peach Orchard (dirt) and then climbed the short hill on Spruce Brook and then took Cassidy to West Flag Swamp where the real fun began. As I was riding through the woods on West Flag Swamp I said to myself this would be a good spot to see a bear. My wife had seen one the day before a few miles from my house and I had also seen one down by the Saugatuck Reservoir a couple of days after the Bloomin Metric and I thought the chances of seeing one on this ride might be high. 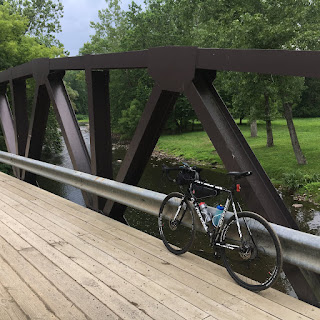 My route took me along some challenging climbs like Old Roxbury Road and up Moose Horn and the bike handled everything nicely. It was especially nice to have disc brakes on the in the initial Moose Horn and Battle Swamp descents. The roads were really dry and loose and descending them was really sketchy. 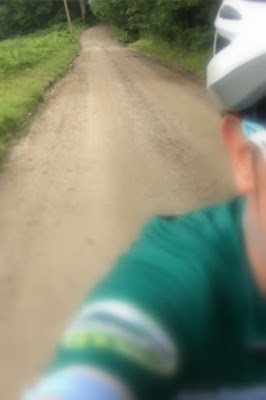 Then I hit my favorite climb on Judd's Bridge. It's the kind of hill that keeps testing you and testing you, and the new bike handled it well. On the steepest part I was missing the 36t that I have on the Surly but I just sucked it up and rode on. Then I hooked around on Ridge Road and descended down Hartwell.  I was really focused on my braking and speed as I flew down this dirt road descent when all of a sudden there was this black apparition on the side of the road. I came to a complete stop and as I did so the bear fled into the woods! My first bear seen while riding a bike! 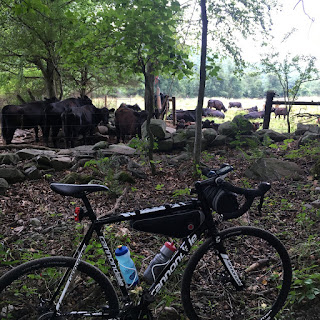 I headed up Shinar Mountain Road and found the road conditions to be really poor, so much so that I actually spun out on the steep section near the cow paddock.  I had never seen so many cows this close to the road and I was greeted by a few calves that must have thought I was some kind of alien compared to the farmer than tends them. 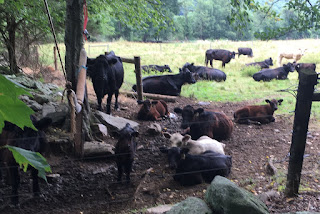 I got back on the bike and continued to climb up the hill and then descended down into Steep Rock. When I ride through Steep Rock, I usually turn onto the old railroad bed as soon as it crosses the Shepaug River but I was enjoying the speed so much on the dirt road I went by it. 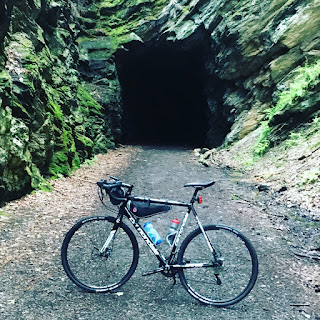 As I got closer to the tunnel the one thing I noticed that it was a lot darker later in the afternoon and when I rode into the tunnel it was pitch black and missing was the proverbial, and in this case literal light, at the end of the tunnel. The Shepaug Railroad tunnel has a bend in the middle of it so when you enter it you are immediately plunged into a darkness where you can't see your hand in front of your face. This was the first time I was riding through the tunnel, without lights mind you, and after a few seconds I was immersed in total darkness.It was extremely disorienting and I didn't know if I was headed towards the tunnel wall or if I was still going straight. I slowed down quite a bit but continued pedaling until much later through the tunnel I saw the light and headed out of the South Portal. 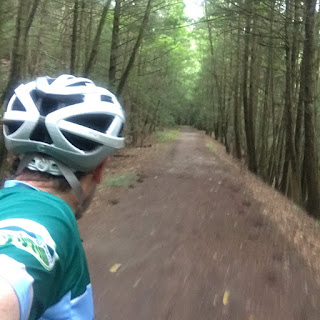 After the tunnel I followed the old road bed to the power lines access road which eventually led out to Tunnel Road. Then it was follow Judd's Bridge, cut down Spargo and then up Hemlock to Weller's Bridge which kept it dirty for a couple more miles. It was getting late so instead of heading down Rocky Mountain to River Road and then back to Southbury via Flag Swamp, the way I came in, I opted for the smooth, newly repaved (black butter) of Rt 67.