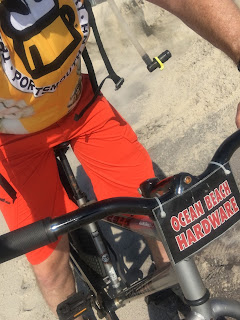 Will's wife Sondra hooked us up with a deal to rent Fat Bikes from Ocean Beach Hardware when I took my family out to visit them on Fire Island in early August.  I had ridden a few fatties before, at NEMBAFest in the past but this would be the first time on a beach. 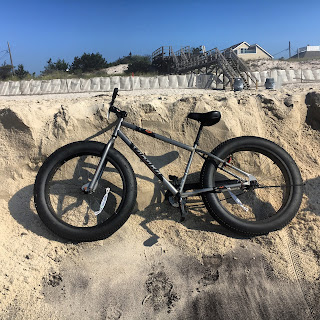 The only redeeming quality of this bike was it had four inch tires, otherwise it was just another cheaply made bike probably purchased from Dicks or Sports Authority to offer up the Fat Biking Beach Experience for the tourists who know nothing about bikes.  Not to mention, a singlespeed on the sands of Fire Island does a Fat Biking adventure enjoyable not make. 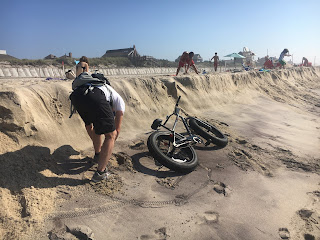 Will and I had to adjust and readjust our seat posts a few times to get it right, after all, this bike rides a mountain bike and it's been awhile since I have sat atop one of those. 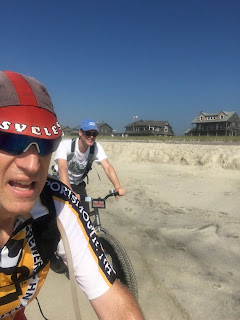 Finally, we got rolling and it was really hard!  Of course, being a singlespeed, the gearing sucked for the conditions.  What was needed was a 22:18 or a 22:20 ratio due to the sand being so soft.  Unlike the beach in Ft Meyer's Florida that I rode on this spring the sand on Fire Island was really soft.  If you went too far from the swash zone you would mire and stall.  If you went into the swash, the soft wet sand slowed you down greatly and kicked up the gook on you and the bike.  The only way to ride the beach was on the edge of swash, and it was still tough! 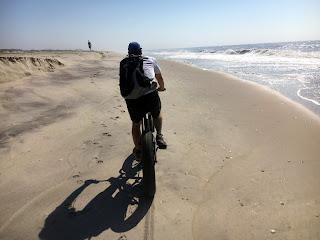 About 2 miles up the beach we came to an area known as Sunken Forest and it became kind of desolate.  The beach flattened out somewhat making it easier to ride.  There were very few people up this way but there were way more Seagulls. 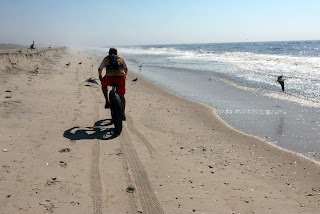 We continued on until we were about 4 miles from Ocean Beach and wound up in Cherry Grove. There were more people up this way but what seemed interesting was there was a complete lack of families or children for that matter.  That's when we had the ah hah moment with the tip off being that the beach houses were flying rainbow flags.  I guess another clue was that there were a lot more people sun bathing in the nude grouped together by their genders.  It was an eye opening experience! 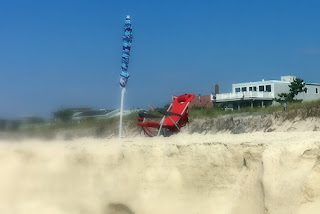 Then there was the naked guy. Initially when we passed him he was sitting in his lounger taking in the sun. After we turned around, he gotten out of his chair and was walking in the swash right where we were riding along and had absolutely no tan lines! 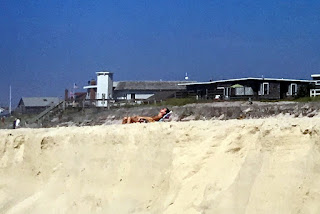 Not sure if he was showing off his great tan or parading himself in front of two, older, really sweaty men riding bikes, but it made for some interesting conversation later in the day. Will and I nicknamed him Buck Naked! 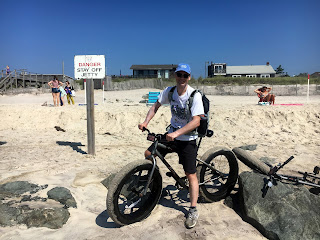 We got back to Ocean Beach and rode through an old jetty where you could huck some of the bolders and then headed further down the beach.  We didn't have to turn the bikes in till the next day so our plan was to break our Fat Biking on the Beach Cherry today and then head out early the next day for a longer ride. 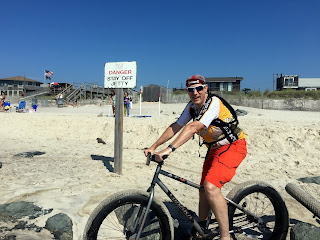 We headed down to Saltaire and had a beer near the ferry dock at 11 AM (It was 12 O'clock somewhere).  Then took the inland road back to Will's rental in Dunewood. 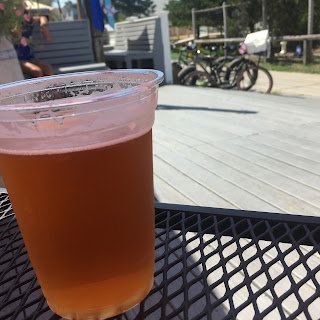