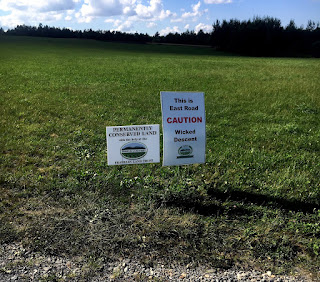 Will and I were going to do 160K ride for D2R2 this year because it has a lunch stop that is not collocated with all the other rides.  Last year, on 180K, the lunch lines were so long we ended up losing quite a bit of time at the Covered Bridge.  Then, earlier this year, Sandy offered up the first ever Mystery Ride which had it's lunch stop at the 160K spot so we decided to do it.  Some of the emails that went out mentioned there would be some dismounts and some hike-a-bike sections but little did we know that these sections of the ride would turn out to be a Napoleon's Death March. 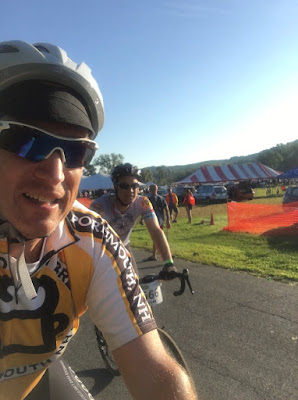 The uniqueness of the Mystery Ride was that there was no GPX download route to download, that is until it was sent out in the morning at 7 AM, to load as a course.  This was a ride that (almost) everyone had to navigate the old fashion way using a cue sheet. 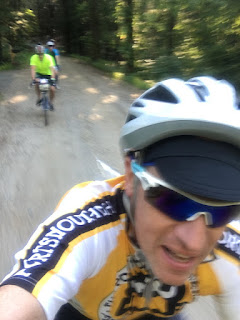 Will and I left promptly at 7:35 AM.  First Dirt was early on, starting with Hawks Road.  Along the way, we met John MacRae (pictured above in the chartreuse jersey) and we rode with him.  He had a Garmin Oregon with him and was able to confirm we were on the right roads. Many of them were unmarked and after a few turns the mileage on the cue sheet never quite caught up with the mileage on our Garmins. We were extremely lucky to be on his wheel.
You could not have asked for a better day.  While a bit warmer than past years the clear blue sky and spectacular views meant for outstanding photo opportunities of the surrounding landscapes.  I was contemplating riding my latest two wheeled acquisition, a Cannondale CAADx Disc, but felt that my tried and true Surly Cross Check was the go to bike for today.  I found that the Serfas Vida HTK hybrid tires were not as grippy in the woods as some of other tires that I have ridden on in the past but the strong sidewalls and thick tread really absorbed a lot of the impact associated with bombing down dirt roads at D2R2.  Having a 36t in the back was also very helpful.  Key for this ride was also having the old school handlebar pack because I was able to use the map cause on top for the cue sheet. 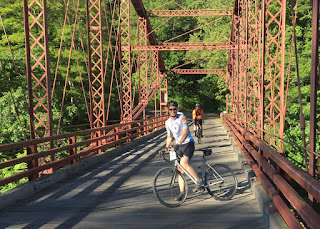 At Bardwell's Ferry we came across this remarkable steel girder bridge with a wooden deck.  We were high up over the Deerfield River and beheld a spectacular view of the river. 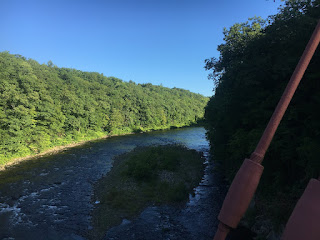 Another unique place along the route was this 20ft Indian Statue at this novelty shop on the Mohawk Trail (Route 2) called Native Views.  According to Roadside America it was erected in 1974 but it reminded me of something you would see out in California from my childhood in the 1950s. 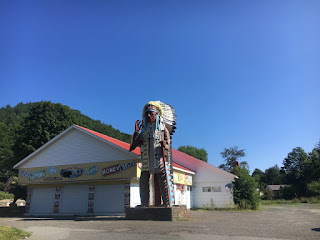 From the Mohawk Trail we turned north and came upon the Catamount Mountain Bike option.  Little did we know that it was going to be the start of one Napoleon Death March after another.  The road in was steep but the forest road was steeper!  Some sections were rideable but many were not.  The cue sheet was pretty useless in there and it was easy to get lost. 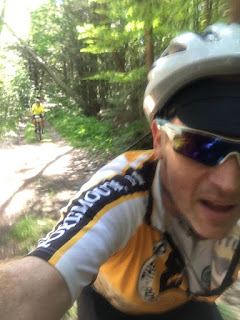 In fact, at the first water stop, Will met up with Fred Harris who he rides with in NYC.  Fred started out with us heading into the Catamount but lost him on the first climb.  Fred ended up taking a wrong turn and getting really lost but found his way out and we met up with him at lunch. 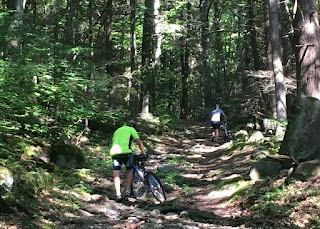 With much uncertainty as to whether or not we were on the right track we found the monument that was the highlight of this route, the site of the first US Flag that was raised over a school house.  Of all places for this happen, it happened here? 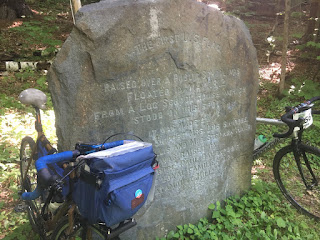 With all the hike-a-bike sections I think it took us an hour to do this 4 mile section.  The next death march was the climb up Stetson Brothers Hill.  It starts out paved, then turns to dirt, then jeep track, and then washed out trail (?) that was impossible to ride with grades as high as 17%! 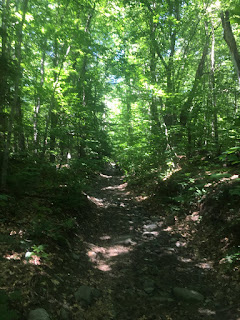 Finally we crossed into Vermont but never saw the marker.  We new we were near the lunch stop because there was a plethora of riders going the opposite direction on the 160 K route. 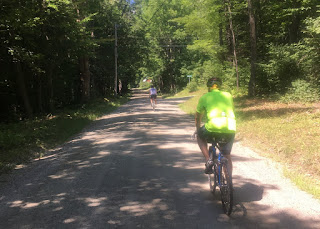 Lunch was awesome.  Pasta Salad, potato chips, Cola, and bevy of snacks.  I gorged on the Pasta Salad with pickles, banana peppers, and Sriracha!  Of course there was a big jug of pickle brine which was worth a few shots, too. 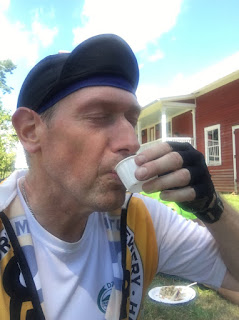 Leaving the lunch stop we headed down to Charlemont and sitting in the sun at lunch combined with some really nice descents I dried off pretty quickly and was feeling really good but we weren't even half way through our ride. 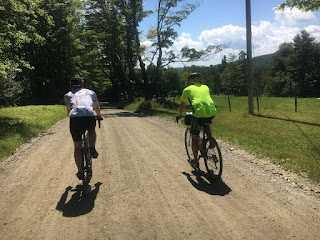 Crossing back into Massachusetts we were on a series of really nice dirt roads with great descents that were fun to bomb down. 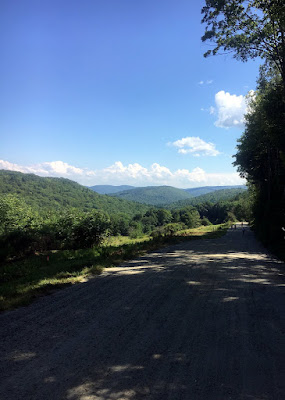 And theren there were some spectacular views as we passed through Rowe looking down into the Charlemont valley. 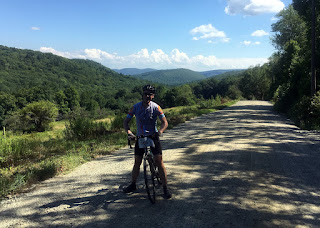 Prior to riding through the Covered Bridge on Route 8A I remembered Mountain Road from last year's 180K route and how steep that road was.  I got the shivers just thinking about that climb. 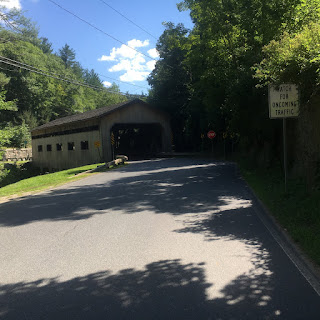 In Charlemont, at the gas station after turning onto Route 2, we met up with Fred and a few of his friends and we filled up our water bottles.  There was some hippy riding up and down the street yelling incoherently at cars and other cyclists.  Meanwhile, as we were riding down the road we were told there was a water spigot that was available for D2R2 cyclists but never found it, only to learn it was at the Charlemont Package Store right before we made the turn to cross over the Deerfield River. 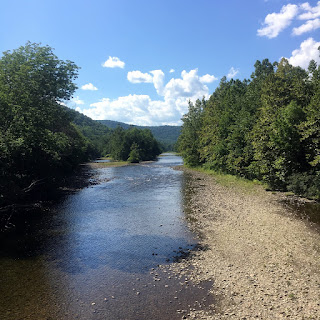 Our group had grown to 6 riders and we decided to do the road bike work around to Pudding Hollow and ride up East Hawley Road, which Will and I rode last month on the Mount Greylock Century.  Will, Marsha and one other person took off up East Hawley Road followed by myself and John with Fred bringing up the rear.  At some point I lost John and I just kept grinding up the hill.  John and Fred caught up at the top and then we tried to get our bearrings, at which point we realized we made a wrong turn by staying on East Hawley rather than turning off midway through.

John, Fred and I headed down Grout Rd and finally picked up East Road and wound our way eventually down to the next hike-a-bike section, a snowmobile track that went from Clesson Brook to South Cemetary Road.  We spent a few minutes looking for the crossing because the cue sheet said to just cross over the brook on a small bridge.  Well that "road" actually had a name it would have been helpful if it was called out as such.  I guess that's why this was the Mystery Ride, the accuracy of the cue sheet was just as much as much a mystery, too. 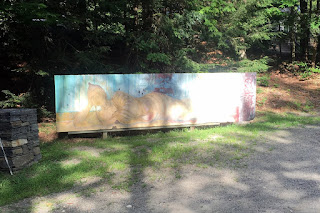 Prior to finding the Buddah, I was riding up the trail kind of slowly when I hit a stick and stopped abruptly and fell over.  I wasn't bonking but the Give-A-Shit meter was definitely approaching the read zone.  Then came two more one mile climbs that both had max grades of 13%.  We finally got to the last food stop at Steady Lane Farm at closing time as well as caught up with Will. I drank two bottles of water and did some more pickle brine shots.  By now the Give-A-Shit meter was pegged and I just wanted to get back to Mill Village and drink beer. 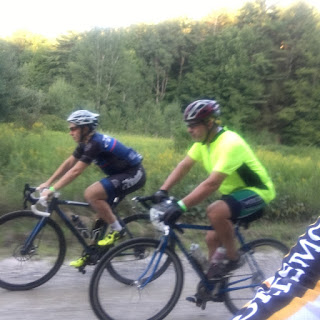 We opted to take the 160K Route back and both John and Fred had the courses in the Garmins. Along the way we lost Fred, who had a different 160K route in his Garmin than John's.  The route we were following was the exact same route that Will and I had done two years ago. 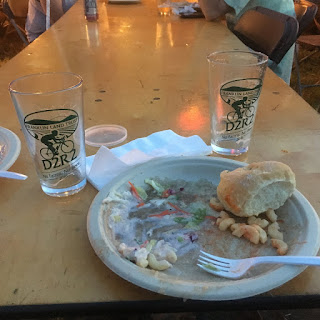 Don't get me wrong, the Mystery Ride was fun and from a performance perspective I did pretty well not having cramped at any point during the ride as I have been doing on all my previous rides this summer.  The Lost Sailor Ale from BBC was out of this world and of course I had the Mac & Cheese with lots of Sriracha on it.  Already looking forward to next year's D2R2.  I am definitely going to make a weekend out of the event and camp out Friday and Saturday.  Might even volunteer, too.