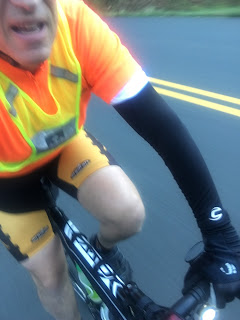 Today was my 18th Bike Commute and I hit my goal of a 1000 miles of riding to work! The ride in was a bit nippy in which I hit a low point of 45 degrees 10 miles into the ride.  I knew it was going to be chilly so I wore arm warmers and gloves. I have also added to my commute my helmet cam because last week I had a blue Dodge Pickup intentionally swerve at me while on Newtown Turnpike in Weston.  I got his plate, CT License 2543-CE combination ironically the car was from Newtown (Rooster Sticker on the back of the car)!  I filed a report on the CloseCall Data base, too. 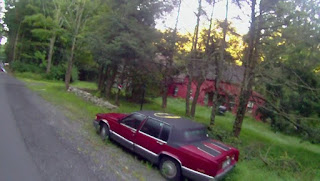 I saw Batman's other car this morning.  You know the one that is sort of less conspicuous than the Batmobile? Here is the one he uses for weekend getaways to Connecticut.  I wonder if he and Superman split the drive, because Superman's country house is over on the other side of the Saugatuck Reservoir in Easton.


On today's commute, while riding up Cedar Road in Wilton, CT, this blue Subaru blared his horn at me while he was passing.  Unfortunately the video quality isn't good enough to get his plate but I will keep my eyes open for him when I am driving through here and get his plate at some point.  I also got buzzed shortly after that by another car. 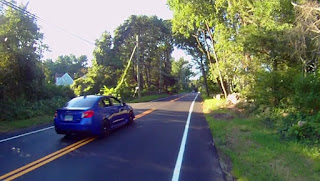 On the way home, I got passed by the same car again.  This time however he didn't honk at me which makes me think he might have learned the error of his ways?  Or perhaps the owner works for a local bike company that happens to be headquartered nearby and perhaps mistook me for one their employees.  I will be asking around. 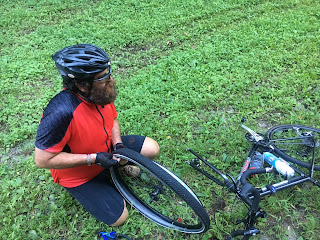 As I was pedaling through the Fred Zone (Saugatuck Reservoir) I was thinking that I should really keep an extra skinny tire tube on me in case I came upon some Fred with a flat and no tube, when I happen upon this cyclist in the same predicament.  Well, he was no Fred since he was riding what amounts to an awesome Gravel Grinder bike, a Salsa Vaya with barcons.  I just so happen to carry with me two 700x40c spare tubes so I gladly gave him one and we chatted while he repaired his tire. 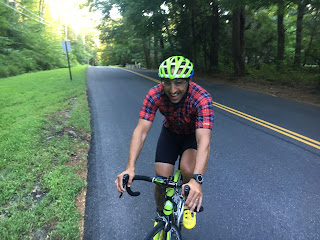 Nick Hage stopped by on his bike commute home to make sure we were OK. 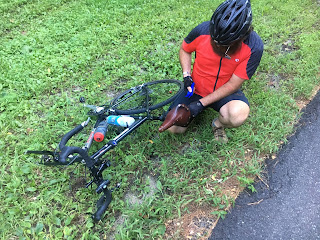 Turns out the cyclist was Rhode Island and he was visiting his folks in Weston and just out for a quick ride around the lake when his tire went flat.  The irony in all this is how many cyclists might have passed him but only had skinny tubes and then I come along and happen to have the right tube!
at 7:48 AM