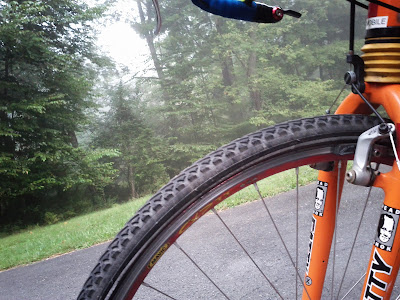 Leaving the house this morning it was foggy and yet very humid.  Hopping on the Fredmobile I decided to check out a new route that I had been looking for the past couple of weeks that could be somewhere near 30 miles.  Of course, coming off D2R2, I no longer dread climbing around here because it's so easy but the one thing I do have to be concerned with, though, is time.  I still have to get to the office and stuff done.

Still, with two hours to play with I followed this route that took me down Poverty Hollow to this monstrous climb, called Church Hill Road. Continuing straight on Cross Highway, and not knowing what to expect, I found myself on a steep descent where I hit 45 MPH! And what comes down must climb up again!  On Rt 107 I found a few dirt roads that I am going to have to try next time. I try this route.

I did, however, have one scary situation where Arbor Truck pulled out of a drive way, not quite cutting me off because I was in the shoulder but it looked like he was going to hit me.  I yelled at him something like "Watch it!"  I might have called him a choice name or two to which when he passed me he gave me the one fingered salute.  When I got to the office, I called the company whose name was on the truck and I asked them to remind their drivers about watching out for bikes.  The owner of the company was really nice and said that he would talk to his drivers. 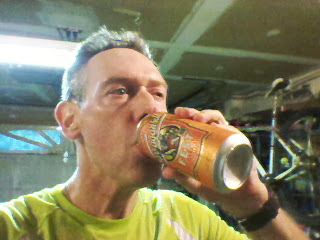 It was still pretty humid and I was drenched when I got home.  Nothing could have tasted finer than this pint of Narragansett Fest Lager!  My ride home was 15 miles which I did under an hour!   Looks like I am getting faster!

Nice bike commute! I've "ridden" up that hill twice - even after the D2R2 I still shy away from it. For future reference, Hopewell Woods is a nice alternative, and it runs right along Huntington Park.

Ridden in quotes because I probably could have walked faster...