My biggest ride to date and what a ride it was!  A few things made it interesting, starting in the early afternoon, knowing that I will probably getting home after dark, and the possibility of running out of water along the way.   Saturday's are reserved for kids activities and events and depending upon what's going on throughout the day, I can either go out really early or later in the afternoon for a 1 or 2 hour mountain bike ride.  This Saturday, however, was my last opportunity to prepare for D2R2, the Deerfield Dirt Road Randone. 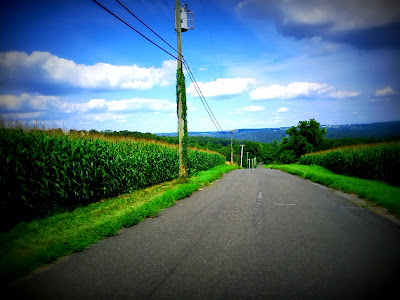 I wasn't quite sure how far I would be riding because the initial course I mapped out on Garmin Connect was a distance of 62 miles but I also wanted to do two laps around Lake Waramaug, one in each direction but didn't put that it into the course routing.  For some reason I had it in my mind that once around the lake was 6 miles but it turns out it's actually 8 miles.  Another thing I wanted to try is riding up Shriver Mt Road in Roxbury (without walking).  I have ridden up this hill 3 times in the past and the first two times I took a few breaks along the way.  The last time I was on my mountain bike with much easier gearing for climbing.  So this time around was to see whether I could do it on the Cannondale.  I found it was very doable yet still challenging! 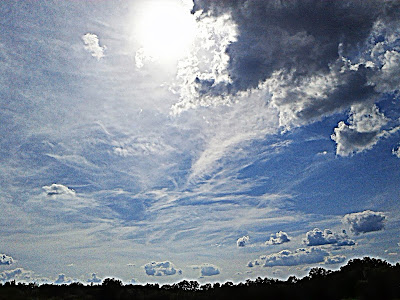 While I planned for more sun exposure by putting on some SPF 50 sunscreen it wasn't really as sunny as I thought it would be, but it was a lot warmer than the last time I rode through last weekend.  Big difference between a morning and an afternoon ride. 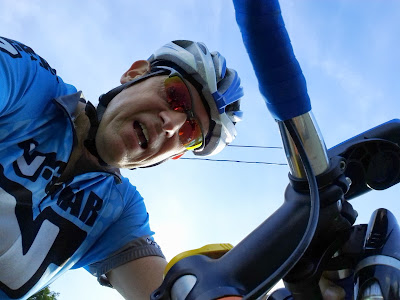 A big change for me, for the better, was a new helmet, a road biking helmet to be exact and my head was much cooler this time around despite the warmer temperatures of afternoon riding. 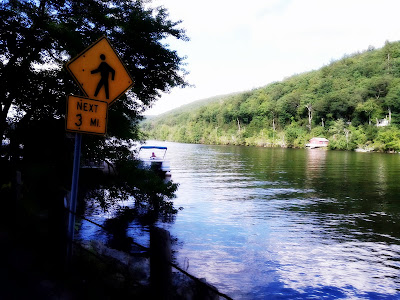 Riding around Lake Waramaug is a treat.  It's like a huge Velodrome with great scenery. 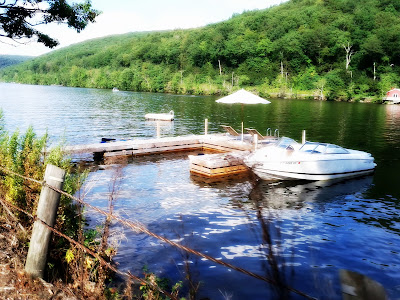 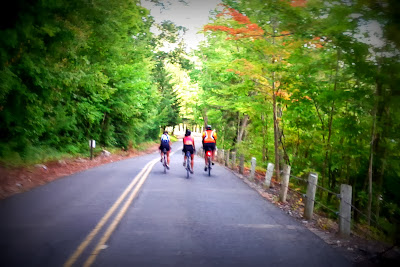 And there always quite a few cyclists. 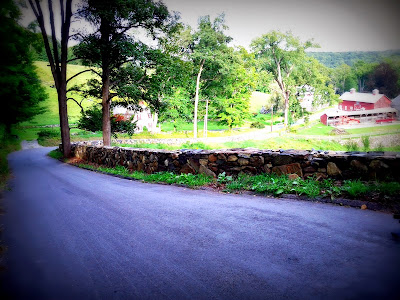 After riding twice around the lake and seeing that the light was starting to fade I toyed with the idea of taking a short cut down Rt 47 straight rather climbing Whittlesey Road but I changed my mind and kept pushing on it was worth it because this section adds a nice component to the ride. 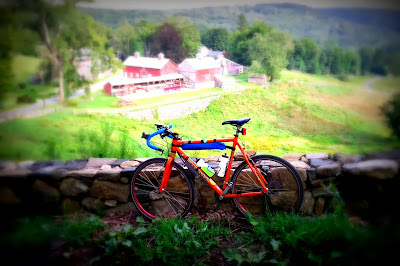 However, next time I want to hit Turner Hill because it's dirt and it will reduce my exposure to Rt 109 where some out-of-stater violated the 3 rule and passed me within 12 inches of my handlebars.  I gave him the one fingered salute and renamed him accordingly. 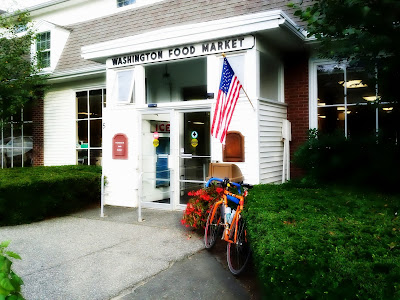 It was 6 PM when I got to the Washington Food Market and even though they were technically closed they let me in to buy a bottle of water.  I probably could have picked up a bottle of water at the Packy in the back but my first inclination was to hit the market.  Roxbury Market also closes at 6 PM.  The only places open past this time around here is the new gas station in Roxbury on Rt 67 and the South Britain General Store on Rt 172.  I lucked out.  I recharged eating my last banana, another guu, that whole bottle of water, and my last granola bar. 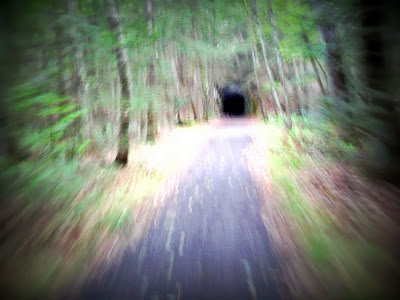 Of course, I can't ride through this area without riding through the Steep Rock Reservation on the abandoned Shepaugh Railroad bed and through the tunnel.  Pictured above is the approach to the North Portal and below, the south portal. 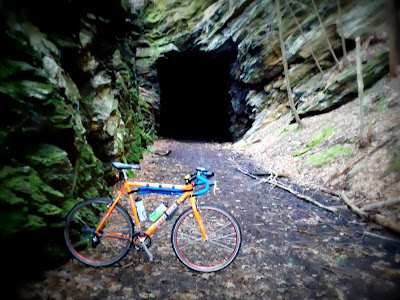 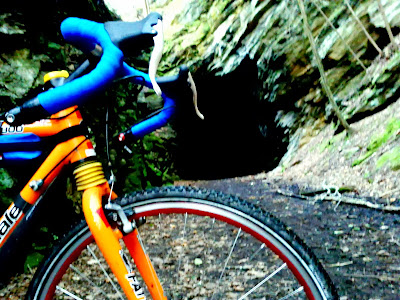 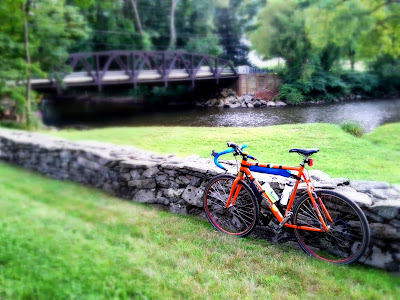 At the intersection of Judd's Bridge and Battleswamp some guy came down the hill, stopped and got out of the car while I was taking pictures of the bridge and my bike.  He then asked me if I dropped any money because he found $5 bucks laying in the middle of the road.  I said it wasn't mine but it was probably from a cyclist and since I was cyclist he should give it to me.  He didn't see it that way and drove off! 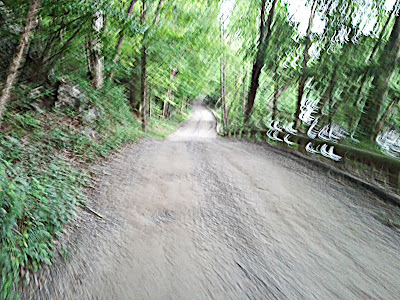 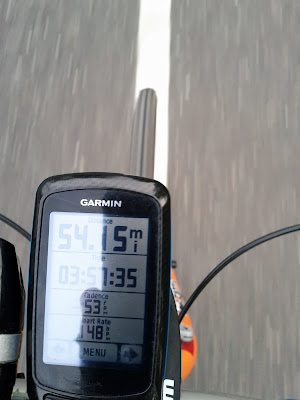 I know the Roxbury Market is exactly 16 miles from my house if I go through Southbury so this was the first time I realized that I would be hitting 70 miles on this ride. 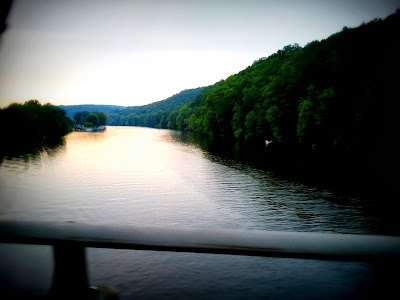 It was dusk when I crossed the Housatonic River on Glenn Road and back in Newtown with 5 miles to go. 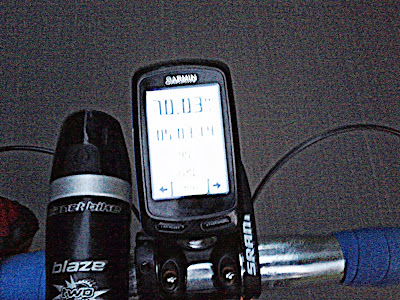 70 miles when I hit the end of the course that I was following! 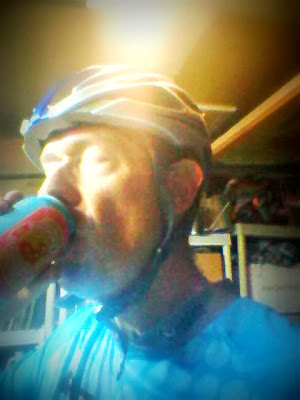 Awesome ride. Also awesome that a random guy pulled over to ask if you dropped money!! But I guess he earned the right to keep it since he at least tried to find the rightful owner.

And the weirdest thing was I am wondering why this guy is talking to me when I didn't even come down that road.