Ride before Work: 55 degrees this morning! 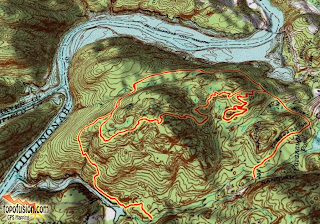 Been a while since I rode the Kona and seeing that I had some spare time before a doctor's appointment on Wednesday morning I decided to hit Upper Paugussett for more than the basic 5 mile ride. 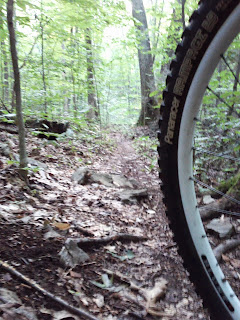 While the Poly Brody was really dry for once the single track trails were showing signs of the recent rains as they were still a bit moist.  Riding down the Gussy was largely uneventful but getting on the Reach Around I noticed that it appears to be getting a lot of traffic!  I gave it two laps just to add to it, too. 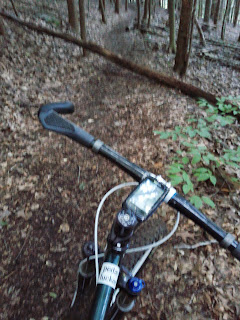 Since I had time to kill I looped back to the Mulikin and took that down only to find some issues that have me concerned.  The downed tree, pictured above is a quick fix.  I probably could have slid it down but plan on coming back with a hand saw, that is, if the trail gnomes don't get to it first.

Further up on the trail, the section before the stonewall appears to have been really muddy with all the rain that we have been having and past the stonewall the trail is getting really rutted out.  That re-route that I have been planning is looking more than ever really important right now but unfortunately, I don't have a lot of time right now to start working on it.  I was hoping for fall with the leaves down. 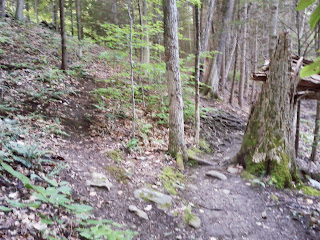 Now here is an interesting development, somebody foot raked a go around on the Blue Trail where those exposed roots are.  Again, my reroute for cyclists is sorely needed here.