Or it found me!  I put off riding as long as possible Friday morning so that I could still get in a decent ride without having to use lights and still make it to the office (dinning room - today's home office) in time since Winter Storm Nemo was shutting down the state. 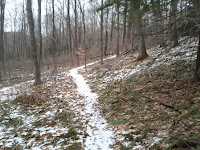 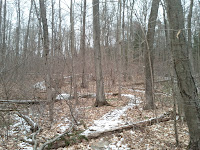 I started out by riding up the Mulikin.  The snow from earlier in the week was virginal and there were no tracks in the snow.  Still, looking at sections of this trail, there is going to be a lot of work involved in a few places. 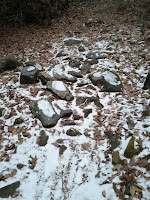 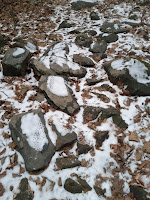 The ride down the Gussy was nice, someone had come before me and it looked like the rider did an out and back from the Echo Valley lot because the goods were untouched.  I cleaned the Wet Spot, hitting the right line, which everyone seems to shy away from, at least this guy did.  The Reach Around looks like more people are riding from what I can see on Strava  and she is getting broken in really well.  The wind storm from last week blew some sticks down but nothing major. 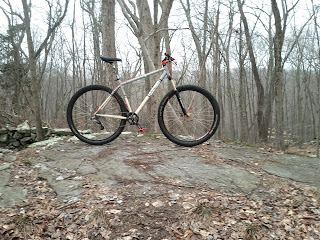 Up and down the Gussy is great ride and while on the way down I didn't notice anything in particular it was on the way up that discovered a new feature.  It appears someone foot raked a path that lines you up with a real decent roller.  It has a great run out, too, and throwing caution to the wind I backed up and went for it.  It was a really nice roll!  Just have to remember to hit it on the way down. 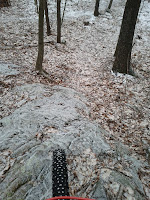 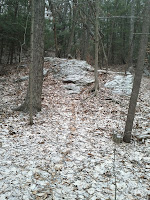 Embolden by my success on this new roller I hit the Log Ride Short but slipped off of it mid way through but was able to keep riding. 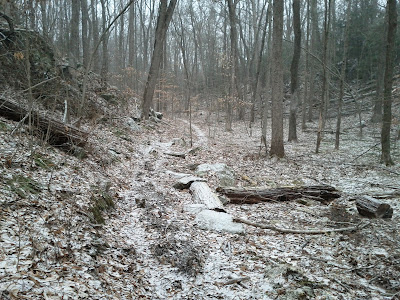 Still feeling cocky I hit the other big up and over at the yellow trail intersection and cleaned that as well! 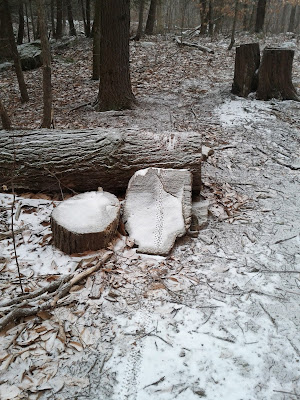 Time was running short so I headed down the Poly Brody and it was turning into a fast pedal until I found that the snow on top of the ice near the entrance was not rideable what so ever and went down.  So, I decided to walk the icy parts. 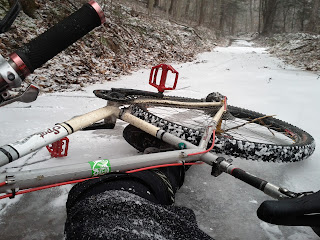 That still wasn't a good idea because slipped on the ice and went down hard, landing on the bike.  I got a nice raspberry in the lower back from my pedal and my back landed on the frame which I think may have resulted in a bruised rib.  Looks like I won't be mountain biking for a couple of weeks.  Then again, with the snow predictions, I don't think the trails will be rideable for quite sometime, either.
at 10:10 AM