Today was my birthday and with my family's busy schedule I got to do at least one thing for myself, I got in another snowshoe!  This time I went over to George C Waldo State Park, which is across the river the from Upper Paugussett State Forest.  My tracks from two weeks ago looked old and were partly filled in but the snow was still pretty deep and the consistency, being more like a snow cone, still needed snowshoes or it would have been a Napoleon's Death March. 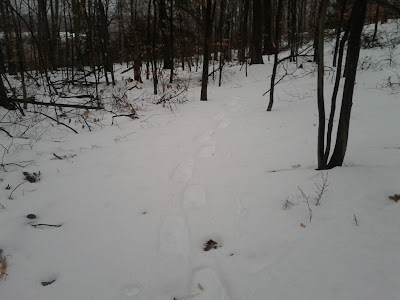 It was lightly raining while driving over to Waldo with an occasional splatter or wet snow.  At one point I even got a little sleet but then it changed back over to drizzle again.  Following the Waldo trail was easy because it's well marked but the other trails were tough.

My plan was to do the Waldo Figure 8, take the main trail to the Hunter's trail and then down to the forest road.  From there do the Extra Credit Loop, visit the beach and then back up the Main Trail, to the Hunters Trail again, up Daffy's Dack and then back to the trail head on the main trail.  My track from today is in red and you can see I missed the actual trails (blue) in some spots.  It's funny how if the trail isn't marked it's a bitch to find it and I know these trails! 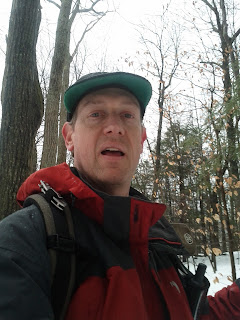 I had another reason for coming out in this sloppy weather - test my new Garmin GPSMAP62 s, it actually belongs to the Connecticut Chapter of New England Mountain Bike Association which I am the President of and basically the chief GPS guy.  The Chapter also has a GPSMAP60 CSx but it now resides on the other side of the state with the Chapter's Treasurer.

The track from the 62 is on top of my old Garmin Edge 705 which I have decided to keep for non biking activities now that I have an Edge 800.  The 62 equally as accurate as my 705.  I am sure the slight variances were due to the way it was riding on my pack.  It's a great device and the 1:24,000 topo maps are super clear. 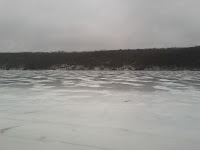 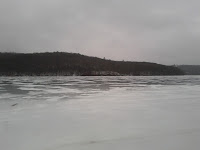 Lake Lillilohna was frozen and the ice looked pretty thick so ventured out a bit on it.  I noticed some interesting features over at Upper Paugussett State forest that I never noticed before that need exploring.  I think if there is still snow on the ground next weekend I might try to get in another trek at Upper Paugussett, this time exploring down behind the kissing oak. 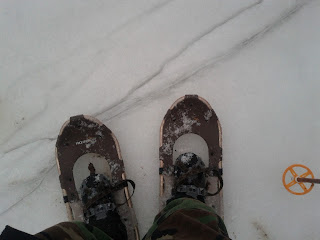 There were some incredible cracks in the ice but it was still solid as a rock.  I should have tried chopping through to see how thick it really was but I didn't have anything on me to do so. 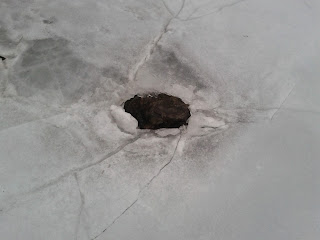 It was cool to see how the water level had receded a bit and these rocks pushed through the ice. 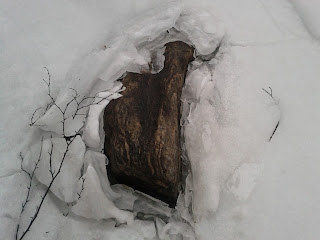 A few things I need to remember to keep in my pack:  a hatchet, would have been handy to see how thick the ice was, a hand saw, and maybe a little more survivalist gear.  Of course, once the snow goes away there won't be much more if any hiking at all because I will be riding again.  All in all, it was a great workout!