Rigid and Frigid in the Blizzard

Accumulations of snow were not that much but with the high winds and blowing snow there some white outs here and there. Got a call last night that there were a few rides taking place at Trumbull this morning starting around 11 AM, so I headed to the commuter lot off of Daniels Farm Rd in Trumbull. Upon arrival, didn't recognize anyone and didn't want to stand around waiting so I took off. 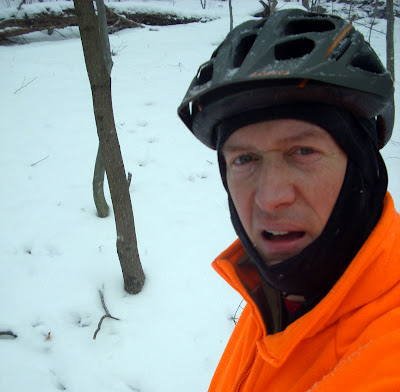 Seeing that today was about 10 degrees colder than it was last Tuesday I opted for another layer this being my fleece snowboard shorts along with my Army PFU pants and spandex shorts for padding. Up top, wicking shirt, long sleeve wicking shirt, thermal top and my blaze orange, wind stopper fleece. Started riding with lobsters and over booties but when my hands started to sweat I replaced them with gloves.
I decided to ride the Dillinger again because it feels so good in the snow and I just love riding single speed and rigid now that I wonder if I should even bother with a squishy for the bike. Besides, the 'Horse needs a shakedown ride at Upper Paugussett before I think I can take it out elsewhere. Ironically it was at Trumbull where I got a serious case of chain suck in the spokes, a bent hanger and a bent brake rotor. 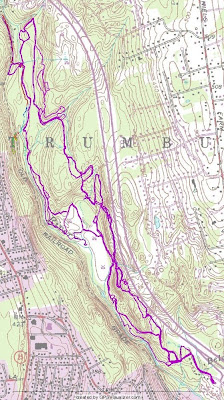 I rode to the start point of the yellow and red trails, which is further north of the first cut off that everyone takes. I was hoping there might be a different way up but it's all rock drop offs. Then I tried to stay on the yellow as much as possible because I was looking for the section that Rich and I missed during our last ride. I found it and also found how the reroute will connect nicely to Mullholland Drive. Below is where this reroute would go through, from left to right. 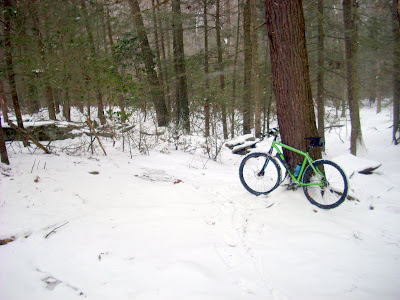 Further north, after finding some more new trails up along the ridge I was coming down one descent when my front wheel washed out in the snow and I went OTB. It was a yard sale. Getting up, I discovered that one of the clips that held my brake cable onto the frame flipped off and my brake like cracked. The loose cable was bothersome but I was able to ride with it, that is until I had another problem where the other clip snapped off as well. 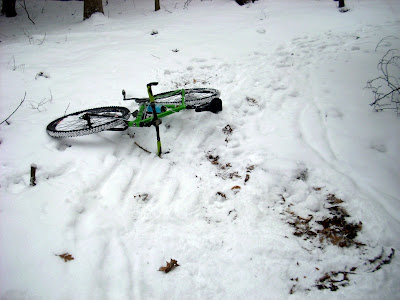 I was in the process of trying to reroute the cable somehow so that it wouldn't be a nuisance when I encountered these three guys riding north on the blue trail. The guy on the left is Bill and the guy on the right, holding the W.F.O. Niner is Rich who hooked me up with his last zip tie which helped me out a tremendously. Apparently this was the other group that was riding today but arrived late and didn't get started until 11:30. 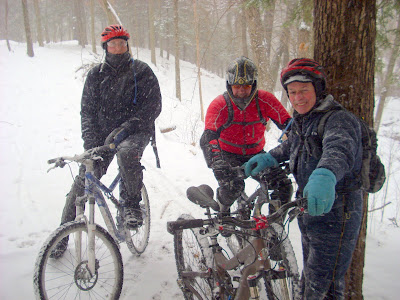 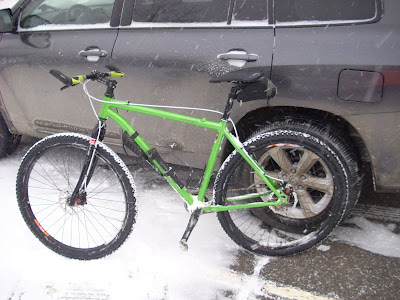 Got back to the car in 2 hours and 30 minutes and had ridden only 7 miles! As you can see in the picture below my jury rigged rear brake cable.

In the picture below you can see the cracked brake line. Good thing these aren't hydraulic brakes. Despite the brake issue, the bike performed superbly. The new tires have so much grip to them and I can't get over how nimble the bike is in this configuration. 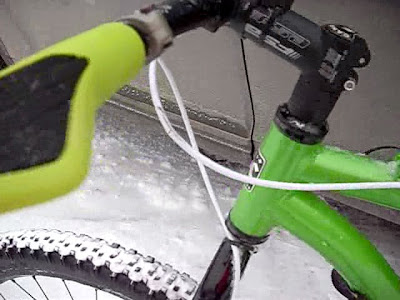