Mud season has returned to Southern New England and to respect the trails and stay out of the mud I opted for a 20 mile ride from Newtown, through Monroe, to Route 127 in Trumbull and back on the rail trail. I rode the Newtown section for the first time, partly out of curiosity and because the Newtown Trails Committee, which I am a member of, was assessing the rail trail for some up coming projects. We are going to build the Rail Trail to no where.
The reason being is the town owns 1600 feet from the Monroe line to where the Housatonic Rail Road spur line ends. There is a trail that continues from where the town's property ends but it goes through the edge of a superfund site that probably won't be cleaned up anytime soon. The only hope for this trail is if something could get worked out with the Railroad to swamp road. 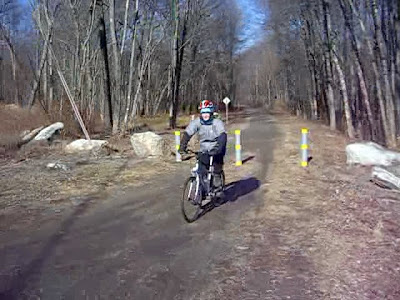 Paula Burton (picture above), who is on the CT NEMBA and Newtown Resident is also a member of the Trails Committee. She rode her bike to this walk through. And then she rode with me to Pepper Street. I continued down through Monroe and into Trumbull, all the way to Rte 127 and then back. The Monroe section between the top part of Pepper Street and the lower part of Pepper Street was the worst because it doesn't get nearly as much traffic as the section between Pepper Street and Wolfe Park, so there was a lot more snow and ice on the trail which made it sketchy at time. 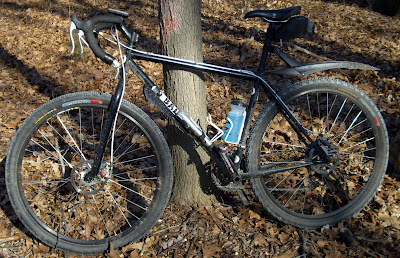 Good thing I decided to keep the fenders on. It was still below freezing when I started down the trail but there were sections that were in full sun that got soupy really quickly. While I have dressing for cold weather mountain biking pretty well figured out, this kind of riding is still a big unknown for me. Lobsters and over booties were a must but up top was a crap shoot. I opted for my orange, windstopper fleece and my wind vest. I had to ride with the zippers mostly open otherwise I would have overheated. 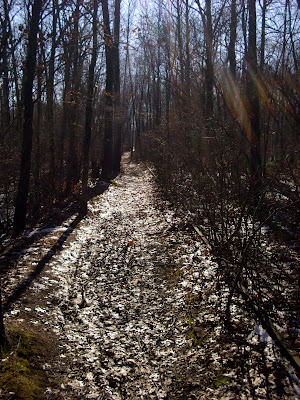 The Newtown section is about 3 feet wide and looks more like an ATV track. When you get further up the trail there are still rails on the ground. 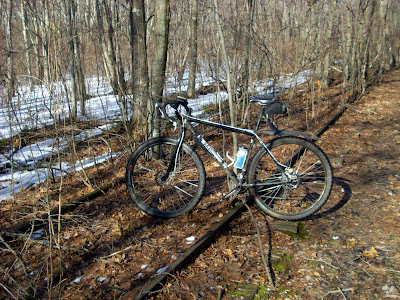 Gearing on the Qball is still not working properly. I couldn't get into the outer ring when I thought I had that fixed. Looks like I need to do more work and testing. The 29er tires were the best in the wetter areas. Skinnier tires would have been nearly impossible to ride the trail in some sections. Can't wait to get the Salsa Wood Chippers. The drops aren't too bad but I need more width for more leverage. When I get the new bars, I am going to upgrade the levers to disc pull levers for Cane Creek or Tektro and I am going to try and do inline brake levers, too. 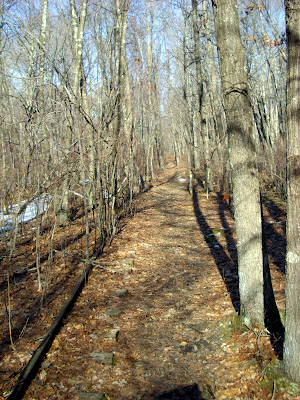 Hopefully in the next six months to a year this will be the first official Newtown Rail Trail. Too bad we can't do the the same with the Shepaug section through the Pond Brook River Valley and the section that cuts through North Newtown and goes over to Sandy Hook. This former rail line eventually turns into the Larkin Bridal Trail in Southbury. Below is a map of today's ride. 20+ miles.
at 6:03 PM

20 miles of dirt and it's connected to trail networks? that's pretty awesome.

I wish. There is probably 3 miles of pavement in each direction, unfortunately. The Larkin Bridal Trail that goes from Soutbury to Naugatuck, 11 miles each way, dirt the whole way.

That's not that bad.

So, it's kinda like the region near the air line trail?

Yes, the Larkin is very similar to the airline trail. That's a great gravel grinder training course, 11 miles of uninterrupted gravel (with a few exceptions).