If you are an active rider in CT maybe you have heard of the Tour de Nasty or some other rides in the Nassahegan State Forest of truly epic proportions and if you thought they were myths, think again. Just look at the Tour de Nasty map on Crankfire.com and you will see. There are miles and miles of trails, from tight and twisty single track devised by riders that actually know how to build trails (hint, hint), to old skidder and cart paths that connect riding areas, this trail system is amazing.
I met a fellow MTB racer and CT NEMBA Trail Ambassador, Mark L, along with a few of his riding buddies, at the Sessions Woods Wildlife Management Area, which boasts a few miles of trails itself but not what I would call interesting. Mark offered to give me a taste of this place and I wanted to talk to him about some MTB business. I had a few hours to ride and Mark said that would be plenty of time to check out some trails. 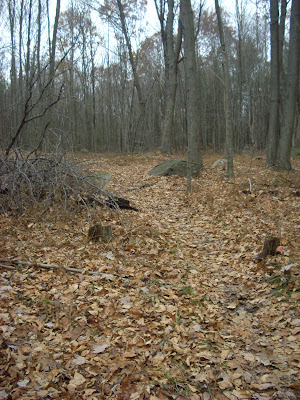 We headed out on a mix of tight, twisty single track that at times used old cart paths (typical to New England) and started heading away from Session Woods. Very few trails were actually blazed but you could follow them easily enough because they are so well traveled in most places. The fresh covering of leaves even made it much more difficult to find the trail at times, too. 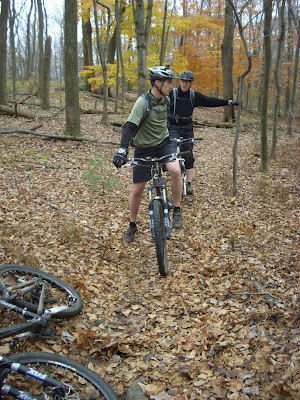 Early into the ride Bob, one of Mark's riding buddies, Bob, executed a perfect superman maneuver on a little up and over. Just caught him by surprise so we took a break to let him get readjusted. Then, a little further down the trail, Scott (green jersey) developed a wardrobe malfunction. He lost a screw from one his cleats making it impossible for him to unclip. 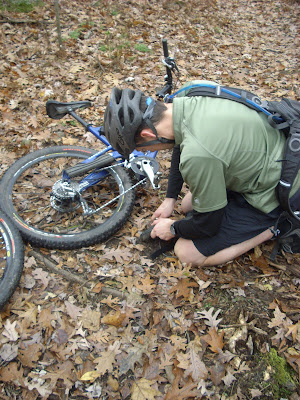 He was able to tighten the other one down but later down the trail found that it still wouldn't hold. I offered to zip time his shoe to the pedal because I had read about someone doing that MBA once but he said that he had some spare screws in the truck back at the lot. Seeing that were still close to the parking lot we circled back so that he could fix his shoe. 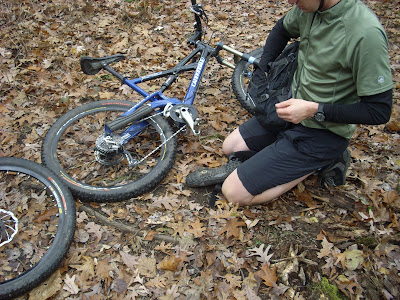 After the shoe repair we crossed over Route 69 and entered into a really cool pine forest with trails winding in and out and around all covered with fresh fallen pine needles. We crossed over a stream on a bridge made out of three telephone poles that had been shaved a little flat. No one tried to ride that. From there was a nasty climb on an old skidder/cart path. I was only able to make it up half way but Scott and Mark cleaned it. 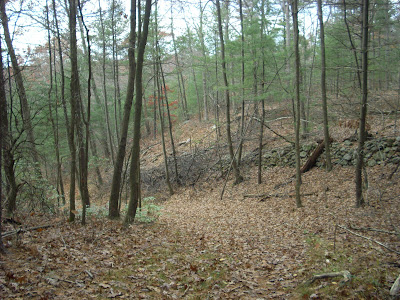 Bob almost cleaned it but then his chain broke. We all offered up quick links but Bob had his own and we were soon back on the trail again. 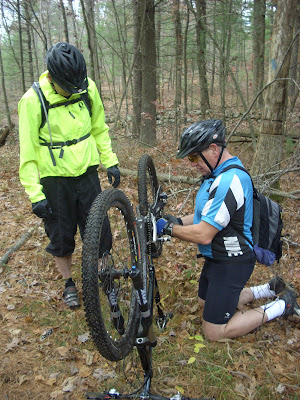 A couple of miles up the trail we came across John who told me later he often rides in the Danbury area and is actually one of the Trail Gnomes I have often talked about here and on the Gussy Trail. 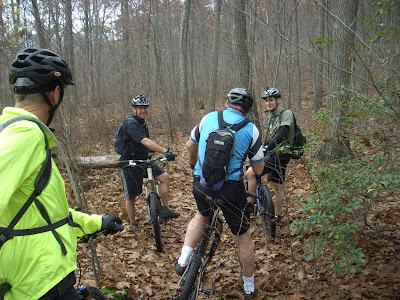 Trails at Nassahegan all have particular names. For example, this trail in which we met ran into John on was called 69er but I don't it's named because of some Frankenbike concoction. Not sure why but there very well could be some sexual connotation. That would seem right because this trail is sexy. A lot thinking went into this trail and it came out excellent. It's benched where benching is needed, climbs never exceed 10 percent, except for one spot but it's kind of minimal so I see why they didn't bother, it hugs the contours and takes advantage of high points and stream crossings. 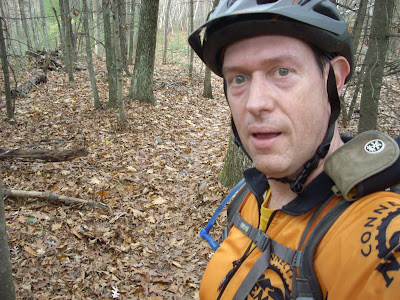 Further on we got onto a trail called Cemetery Twisties whose name says it all. There is a cemetery where Scoville Road intersets with Milford Road and trail through there twists and turns squeezing out a few miles. From Scoville Road, which happens to be another big jump off point for riding at Nass we made our way back over to Sessions Woods.
Here is the route: Sessions to Four-way, Truck Trail to Sessions and back to the parking lot (to fix Scott's shoe). Then crossed Route 69 to Blue Trail to Baba's Bypass, walked over the brook on Baba's Bridge, climbed to High Road, then Cemetary Twisties (in reverse) to 69er to Laura's Bridge (crossed it) to Route 69 (crossed it) to Hinman's to Boy Scout Bridge (crossed it) to Four-way (see above) to Brian's Trail (or B Trail) and back to parking lot!
Two hours and forty minutes and 10 miles of riding, and this was just a taste!
at 7:30 PM

Nice riding with you Mark. We'll have to show you the other side of the network sometime. The name for the 69er came from the fact that the trail parallels route 69. There were other names floating around, but that one stuck with the local crowd. Rueler

Thanks for leading an awesome ride. I thought that might have been the case.