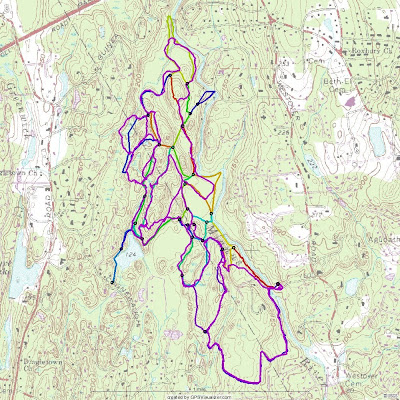 Took the Dillinger to Mianus this morning. I would have preferred to have had the 'Horse but I am still waiting on the replacement hanger that I ordered, but Mianus is great for riding it rigid as I found out so long ago when I first got the Qball. The dark purple track on the map above was today's route and you can look at it interactively on on MTBGuru: Turkey Burner. 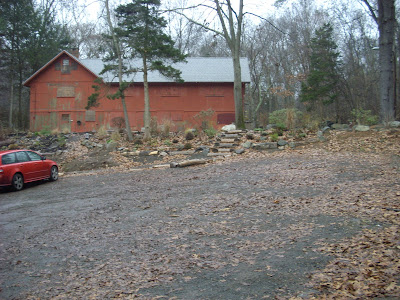 When I got in the car it wasn't raining but it had obviously rained the night before. The radar map showed a 50/50 chance of getting more rain this morning and the drive down to Stamford certainly proved the weatherman's accuracy. When I got to Merribrook Lane I was taken by surprise by two things: (1) the new parking lot between the road and the red bar and; (2) the fact that the parking lot was really empty. Seeing that I was also a half hour early I got ready. Decided that it was too cold for shorts so I put on the bibs.

Shortly thereafter Glenn, the CT NEMBA Secretary showed up, then a few other people started to trickle in and by ride time we had 9 people raring to go. By this time it was raining however, it was a light rain and nothing heavy. 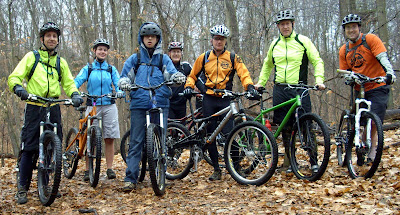 The trails at Mianus are perfect for singlespeeding and no suspension. I tried a few smaller hucks, hit just about every up-and-over, and had no trouble keeping up with everyone else. Two hours into the ride the rain stopped and a half hour later the sun even poked out for a bit. With the exception of a few stream crossings where you would always expect to find mud the trails were not muddy at all, except for the Swamp Trail, but what would you expect? 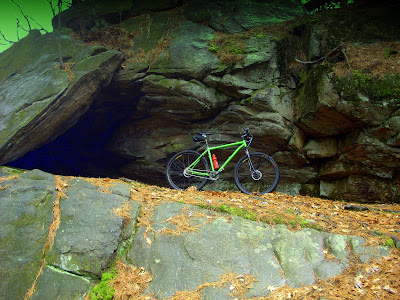