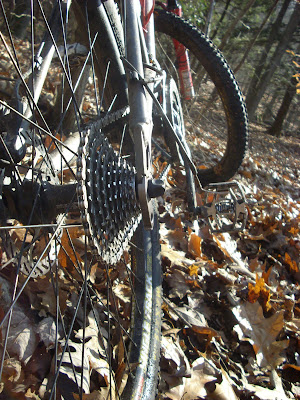 I put on an different cassette last night and tested out the bike in the driveway and up some hills in my backyard and everything worked great. Headed down to the Trumbull this morning seeing that I haven't ridden there in awhile. The ride down the blue trail was nice, then on the white trail above the Serengeti I wiped out on some roots and mud and I think I might have hit the hanger because all of a sudden I started to have shifting problems. 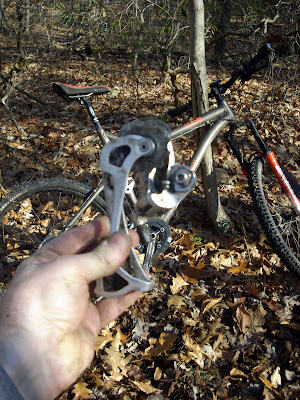 My chain got sucked in between the spokes and the cassette and I couldn't get the chain out. Looked like it was going to be the walk of shame until I broke the chain as close to the cassette as possible on both sides and the remaining piece of chain just slid out! So I rigged the 'Horse up single speed and rode back to the lot on Whitney Avenue.
However, the first 3/4s of the ride was really nice and technical. I tried the following the blue trail all the way down but lost it and wound up in some thicket that I had to back track out of.

Some one lost some keys on the Blue Trail after the old dam that were resting on this moss covered log. I posted the waypoint for them on the CTNEMBA blog. 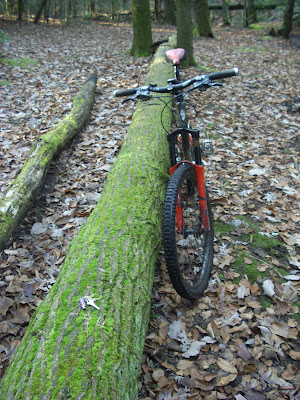 Of all the trails at Trumbull, I like the Blue Trail the best because of it's proximity to the river it tends to be very rooty and rocky. 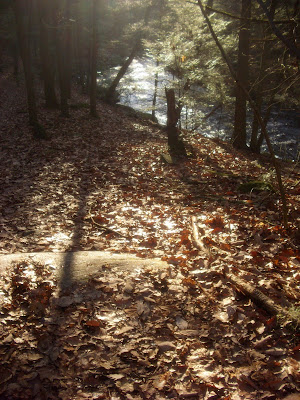 Before I got caught up in the thicket I came across this doe in the old lake basin. 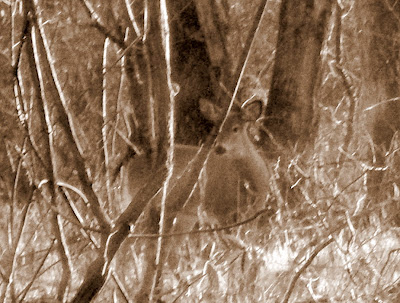