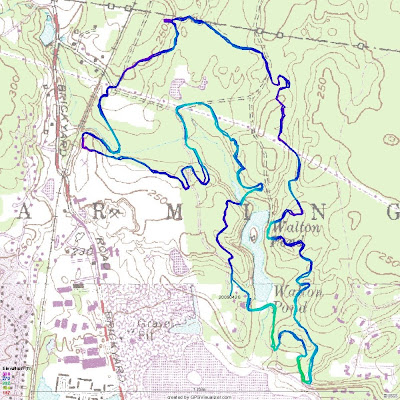 With temperatures reaching into the nineties today I wasn't sure how I would do but my goal for today's race was to finish. I was ready to race! I pre-hydrated, had plenty of carbs in me, and one of the guys I met on the Wilton Woods Ride a couple of weeks ago hooked me up with a nice trick: taping glu shots to the top tube so that all you had to do was pull them off and they were open. This time I warmed up by riding around the parking lot and out on the trail for a mile. Ran into quite a few people I knew, too, like Mark Leggit, Art Roti, Matty Meuller from CT NEMBA, Adam Roth and his GF Cheryl from Ridefetish.com, a few people from Crankfire.com, and my neighbor Frank. 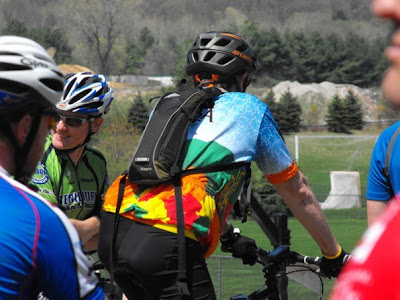 The glimmer of hope that I would finish anything except last faded at the start when my heat started, Single Speed open. There were 10 of us and at the sound of the whistle we were off but the time I got to the top of the first climb I was all by myself. Even the video dude wrote me off in the clip below.
Cat 2 SS Start
(couldn't get the video to imbed in blogger)

Check out they guy on the bike with the really Fat Tires, he's racing a Surly Pugsley, single speed no less! Now that is cool! I think if I am going to continue riding riding this way, I need to get a lot stronger (and thinner). Still, with the heat, I didn't was to push it. Good thing I did a little pre-ride because there was one down hill section that turned into a drop to flat that I almost endo'd on. During the race, I hit the line each time and saled through it easily. 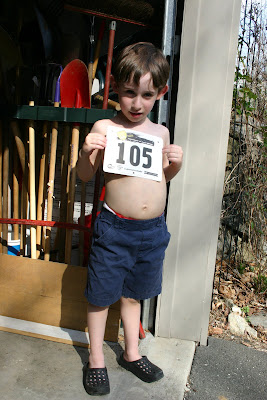 After the first lap, I was feeling great but decided to take it a little slower on account of the heat. The spokes on my front wheel were seriously creaking the whole time, and I just had the wheel trued on Saturday. On the first lap, I never got off the bike expect for one patch of single track where you decended into a curve that was all sand and it turned, and I came close to running off the trail. Otherwise, I cleaned every climb. I have to hand it to the gearing selection. 34:19 was a perfect combination. 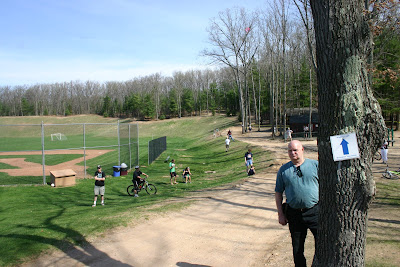 On the second lap I walked a few hills and took it easier but on the last lap, I stayed steady and consistent. At one point I even passed a guy from the heat in front of me, some guy riding for the Vermont National Guard. I chided him as I got ahead of him, saying "you are going to let an old fart on a single speed beat you?" I also threw in, "A Quarter Master and a former Field Grade Officer?" I should have told him that unless he was puking, he wasn't trying - we used push one another that was during Physical Fitness Tests. Needless to say, he never caught up to me after I got a head of him. 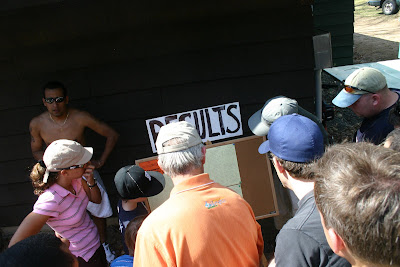 My goal was just to finish and that I did but with the added bonus of an 8th place finish, within the top ten! Of course there were only 10 people riding in the Single Speed Open Class. From what I can tell, because I don't recall passing any single speeders was that two of them did not finish. Despite the heat, it was a fun race. The ice cold PBR was perfect after the race and when I got home, the real reward was the growler of Lost Salior IPA from BBC that I drank three quarters of the jug while relaxing in the shade of my front porch and then later grilling on the BBQ. 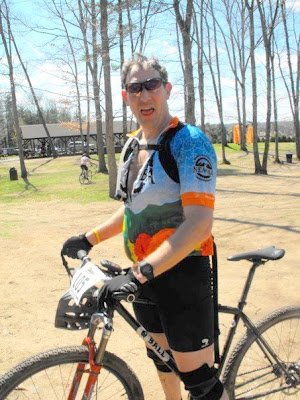 Congrats on a good race and surviving the heat!