If it aint raining it aint training! 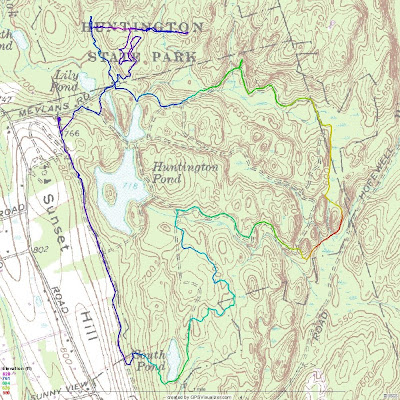 Used to say that in the Army all the time. When I left the office with the intention of doing a training ride I never expected it to be raining. My Blackberry kept telling me partly sunny with a high 51 degrees. That is until I clicked on the app to find that today's forecast called for a brief shower. I headed over to Collis P Huntington State Park in Bethel thinking I might have to bail on account of the weather but all it was just a couple of sprinkles.

What I wanted to do was find a contiguous four or five mile course that was mostly rideable, if I had to walk up a hill or two that was fine. I think I found it but ended up squandering my available daylight trying to find the Big Burn from the back way. I found it but as you can see on the map above I got all the way to Table Top Rock when I discovered that I missed the turn off. 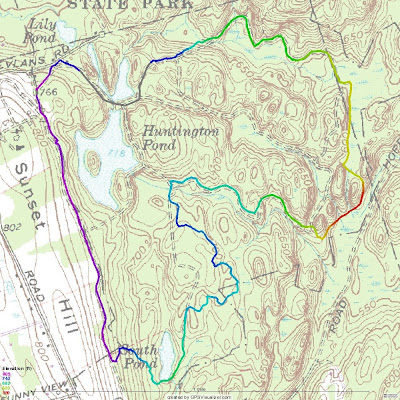 Weather depending, either Tuesday or Wednesday after work I am coming back and going to bang out two laps of the course above in preparation for my second race this season at Winding Trails in Farmington. I am going to do another CAT3 three race on the single speed, mainly because I don't have a bike yet that I would consider race worthy. Working on it though. If I can sell a few bikes from the stable, I might have be able to pull enough together to start building up one. 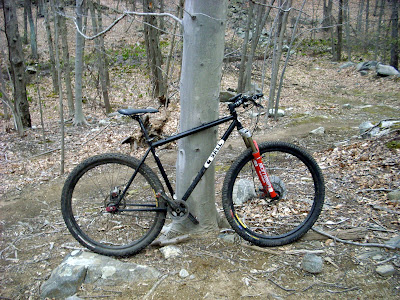 The Qball is my favorite bike and I might even consider going back to the riding rigid again. I might swap out forks for my Surly 1x1 and go with some flared drops and build up a real monster cross and try a few cross races this fall.
at 6:42 AM

I was over at Winding Trails last week as I was house sitting nearby. It looks like they've added a bit more singletrack to the course this year. It should be fun.

Yes, there is a thread or two on Crankfire.com talking about that. I don't think I will pre-ride it though. Hope to get a training ride in Wednesday and Friday and both rides will probably be at Huntington SP doing laps on the course I have decided on.

I think they charge you to come into Winding Trails with a car. There's definitely some way that they charge you and I think that's it. I've only ever entered it with a bike, so no one has charged me.