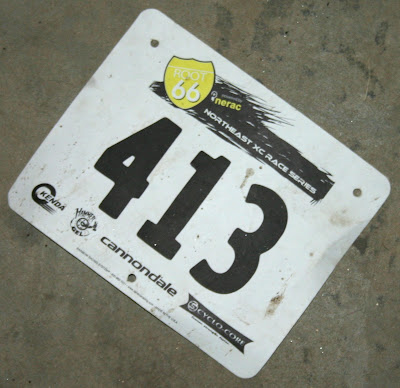 I was up early on Saturday and couldn't bear the thought of having to hang out all morning before heading over to The Route 66 Bunny Hop Brook Mountain Bike Race. My knees were bothering me as well and I wasn't quite sure how I would hold up on a longer distance ride vs a shorter one. I am glad I did because by the time I was done with my race it started to pour and had I waited until 2PM, it would have been a real slop fest.
I decide to wear my bibs, cold weather shoes (because they have rubber soles rather than my cheaper pair with plastic), a long sleeve techwick, and my NEMBA jersey over that. Unfortunately, I don't have Cyclesnack.com jersey yet. When I got to the registration tent, the people handling the sign-ins were very helpful and got me switched over to the right event. One thing that I didn't have time for was warming up -- should have done that and will remember that for the next time because it would helped process all the banana, breakfast, gatorade and water that I ingested on the way to Hop Brook.

The course started out flat, on grass, and I found initially that I was really pushing hard, perhaps too hard because then the climbs started and I was already pretty winded. Again, I probably should have rode more during the week to prepare but my knees were hurting and I opted not to ride last week. That was probably a mistake. In the video below I am 33 seconds into that clip.

My goal for this race was to first see if I could do it and not only did I do it, but I bested a few geared riders, too. At the first stream crossing, I passed two guys from my group that got hung up. I also passed two more guys from a younger group, otherwise it was all the young kids that were passing me! A few guys from the next age group up passed me. During the second lap, another guy from the next age group passed me, then I passed him, he passed me, then I passed him and stayed ahead him till the end.

Since I was in the 40 - 49 age bracket, that explains the first number on my numbers, 4 is forty year olds, and 13 meant I was the 13th registrant. Ironically, I also came in 13th. I think the only reason I did that was for the mishap those two guys had at that stream crossing. Also, I think if I had pre-ridden the course I would have been able to strategize better and where I could rest while riding and pour it on for the climbs that were rideable. Still, it was fun and I hope to do it again. 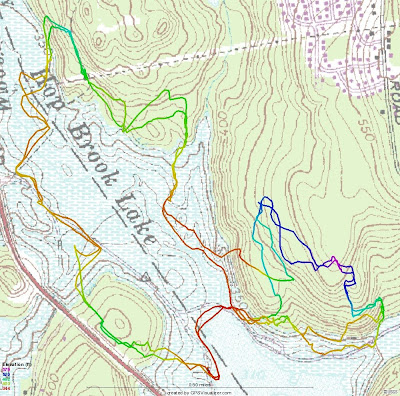 The Edge was not tracking well. I wonder if it was the speeds or the overcast conditions but the map above is for the two laps. and as you can see it was all over the place. I cleaned up the tracks and turned them into a network using GPS visualizer to get a better idea of the race course. The first thing you might be saying to yourself is "how was water?" Hop Brook is some sort of Army Corps of Engineers project in which there was much larger lake in the 60s and 70s but now it's much more smaller. 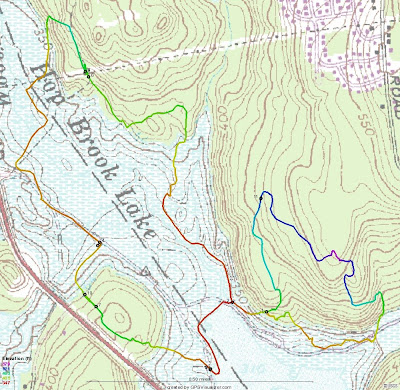 I knew one other person racing CAT3 and that was Brendan from The Beat Bike Blog. He got third place in his age category. Outstanding! 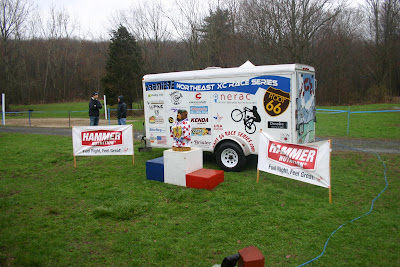 Also racing was the CT NEMBA president, Art Roti. I met up with him before leaving. 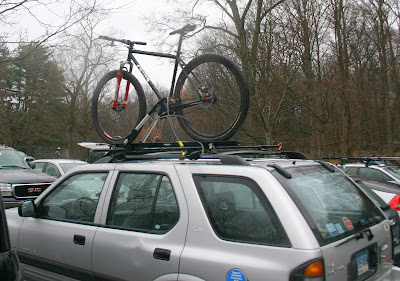 Nice Job! It's always great to best a few gearies and a few young guns.

The single track in the video brings back memories of ripping thru Poto in Meechigan. Good times for sure.