Smile for the Camera! 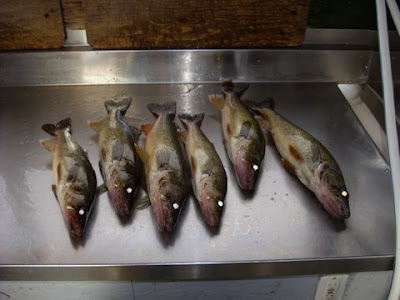 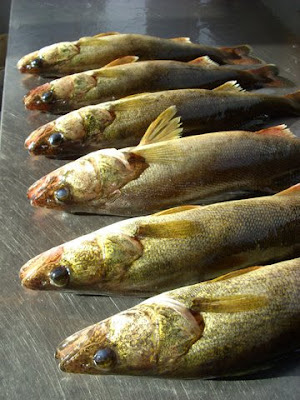 Here are some pictures of today's catch! Probably should have had the
red-eye flash on. We kept 6 but we 12 walleyes all together. The
other 6 were thrown back, or released near the boat (came off the
hook). My father lost a big one by the boat because he didn't have
his drag set right.

This is the first trip in which we aren't regularly catching pike! I
missed a nice one this evening though. Fishing a weedless spoon, this
big pike ambushed my lure but I couldn't set the the hook. The water
was smooth as glass and I was wearing my polarized glasses and saw the
whole thing. He would have been a keeper.

Tomorrow we are heading down to the big water of the Cabonga Reservoir
to troll for Lakers. Didn't get any on our first attempt at an area
called Baie Dixie but we had no clue what we were doing. Hopefully,
this time around will net out!

I had faith in the walleye finding your lure! Their eyes look buggier than usual - were they pretty deep?

Are you going to prepare the Minnesotan delicacy of "walleye cheeks"?