Dropped my Daughter (Katie) off at the bus this stop this morning. She wanted her picture taken holding my bike so there she is. One thing to note, I am ditching the trunk! It was fine if I were riding easy, dual track trails, but now that the Upper Gussy Trail is coming along and stuntry is getting more and more defined ... and I just can't keep off it, the trunk keeps falling off. So, I will just have to plan on riding with an extra tube in my camel. 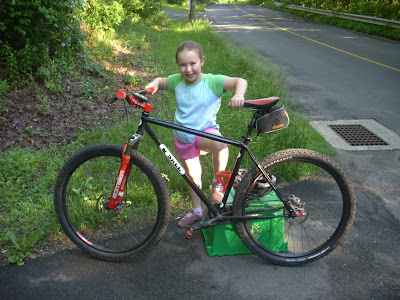 Despite the trunk issues, after the hike for NTD, I decided to ride that section again - going up the same way. It's a much nicer climb, it's just the section along Al's trail with the two stream crossings that make this route painful. I cleaned the big climb on the Brody Road, so I am now 3 for 3 since the last time I choked at this point. One thing I happened to notice about our benching versus the benching on Al's Trail, is that on Al's it's really smooth, so I think that is something I will have to plan on in the future is re-grade the benching so it achieves that smooth singletrack feel.

Below is the map from today's ride. The track show is a 5.9 miles. So, if you parked at Silver City and wanted to recreate this ride, head down to the second entry point, which is around the corner from where the forest road meets Hanover Road. The second entry point doesn't make sense as to it's location. My guess is that this is the original point where the forest road met Hanover Road.

A few comments about the map. The return leg follows the forest road until you get to the top of the last climb and then it veers northward down the old Mulikin trail, which needs a lot of work now. The trail is nice but thicket is starting to choke the trail. The lower part of the Mulikin Trail is quite muddy and it looks like my efforts to create a bypass seem to be going unheeded. I rode through the bypassed section only to discover many tread patterns in the mud. So it looks like the other riders aren't getting the message, and it appears I might have to double the effort there. I think cutting back the growth might help. 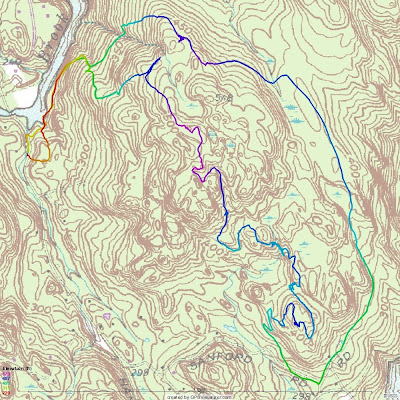 I hit the new roller handsomely and I am cursing myself for not stopping to take some vids of hitting that as well because as you will see further down, I shot quite a few clips on the rest of the stuntry along the trail, including the new up and over that built during the last ride. 29ers are incredible in these situations - they just eat it up. Anything with a steep ascent in which you would expect a big jolt up if riding a bike with 26 inch wheels is just not there on 29 inch wheels.

Further down, I got some clips of riding the two armoring points, Hadrian's Wall and Via Roma. Again, the difference between riding the Iron Horse and the Qball here is quite different. The 'Horse with it's full suspension seems to bounce more which is largely due in part I think to the suspension reacting to the uneven terrain. On the otherhand, the Qball seems to glide more through the rocks.

At the Wet Spot which is much more technical and may need some changes due to some of the feedback I am getting from the horse community, the Qball again seems to float right through this section, where as the 'Horse seems to be more choppy.

After I was done with the Upper Gussy, I rode back on the Forest Road. There was a new tire track that I had noticed a few days ago. Maybe the State is planning on doing some logging. Rode the Brody Road to the Mulikin and stopped off and rode one of the two logs in the middle of the trail. My first time, but it not the log's. Looks like other people have been riding it as well. It was fun playing around on it but having only one gear makes it really challenging. Need to bring the 'Horse and do it right. So, here are all the clips of me riding all the stunts and features. The map above shows you where they are and the sequence goes: New Up and Over, Hadrian's Wall, Via Roma (with a few different angles), the Wet Spot, Blue Blaze Roller, Wet Spot, Via Roma (again, from different angles), and finishes with Hadrian's wall. The music is from Lacuna Coil, which is an Italian Gothic, Heavy Metal Band, and the song is called the The Prophet Rules.


The profile for today's ride is really accurate, especially for a morning track. 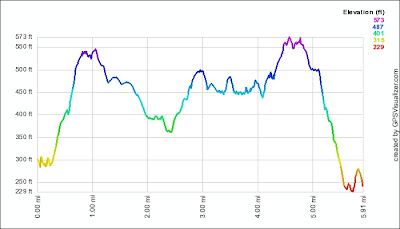