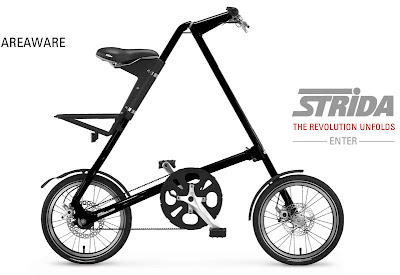 Found this little morsel on The New York Times Online edition. This is the lightweight (?), ultra portable, rolling when folded Strida. An interesting concept that started out as an Engineering Design project. I question the weight only because lightweight to me would be sub twenty pounds, like somewhere between 10 and 15 pounds. They do have a mini version, which can only handle 175 pounds and that bike weighs 19.8 pounds, the 5.0 version which is made for the US can go up to 250 pounds. Too bad there isn't a fixed version - I would try one of those. 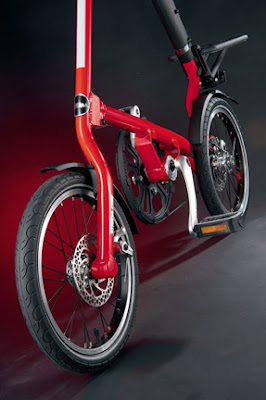 The drive train sports 56 gear inches and I found this nifty formula on Wikipedia to help calculate or at least infer what the gear ratio is:

Gear inches express gear ratios in terms of the diameter of an equivalent directly-driven wheel, and are calculated as follows:

I would assume that the wheels are probably 16 inch wheels and I would think the manufacturer would use a standard front chain ring, my guess is a 52t, so the ratio is probably 52:15.
at 5:42 AM