How to Tape Your Bars

Since I am primarily a mountain biker my experience with bar tape up until last weekend has been non-existent. Grips, on the other hand, are the norm for me. Lock-ons are the easiest to work with but I like the Ourys the best. I put them on with a little alcohol and water and they hold really nicely to the bars.

Last weekend, I made my first attempt at taping. I looked around on the internet but couldn't find any reference or instructions on how to do it. The tape kit that I got from PricePoint.com didn't have anything, either, so I winged it and I have to say that they came out pretty good on the Bullhorns that I put on the Bianchi. 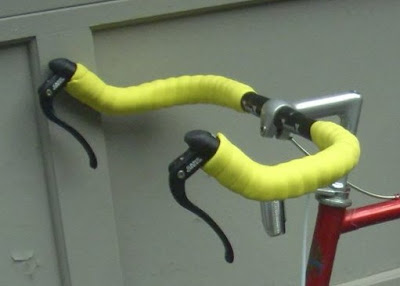 On Saturday, before my daughter's dance recital, I had some time to kill up in New Milford, so I went to one of my favorite LBSs, Straightline Bikes and Boards. They were pretty busy. I picked up a pair of Crankfire Socks and some Planet Bike Bar Tape. After the response I got from putting the Cannondale up for sale I started to have Seller's remorse so I opted not to sell it. Not that I would miss the bike but maybe I was asking too little for it. Not to mention, I haven't really given it a fair shake down ride. One day pulling my two sons in their Burley Trailer doesn't constitute a good test of it's capabilities.

One thing for sure was that I had to do something about those cut drop bars. I took them off this weekend and replaced them with drop bars that I took off the Bianchi. Putting the brakes back on was pretty interesting but I was able to manage it pretty well. One thing that I happen to notice about the Planet Bike product was that it actually had instructions on how to apply it! 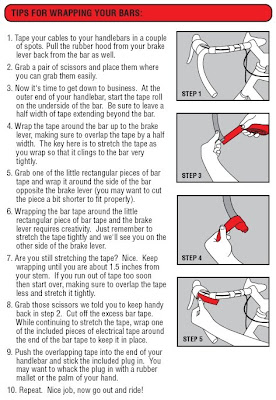 One thing I noticed on the instructions was the first point about taping your cables down. I assumed this was the proper thing to do with the Bullhorns and did just that. The Cannondale brakes weren't aero brakes so that wasn't necessary. I was wondering what to do with the short strips and now I know, see step 5. I used the white electrical tape this time but I was able to tuck it in on the Bianchi because of how I aligned the cables. 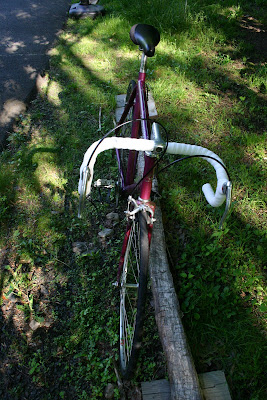 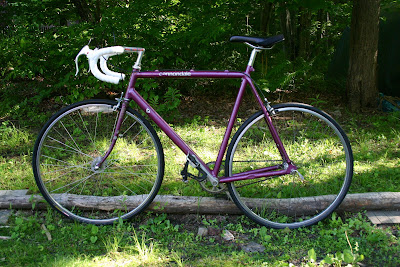 I rode it up and down the driveway a few times to test the brakes and see how it feels. It's nice but I think the frame is tool small for me. I will take it out for a ride this week and the decide what to do with it later.
at 6:26 AM

Hey Mark, Thanks for the tips on taping. I've always butchered mine. Yours turned out great. Cheers.